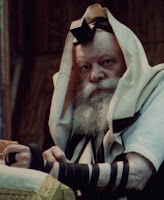 As regular readers of this blog know, Francis is into all things Judaic, especially Chasidism.  Their doctrines creep out here and there in Francis’ sermons and documents.  One of the things which Francis does with regularity is to invert the teachings of the Church.  An example of this is the use of the term ‘pharisee’ which he applies to his enemies, who are not open to Talmudic Judaism and Francis’ anti-Catholic machinations.  Another example is his favorite blasphemous painting, White Crucifixion.  Francis shows his hand, when he inverts Catholic doctrine, as a modernist change agent who is simply following the dictates of ‘The Rebbe’ to be, “modern on the outside and Chabad on the inside.” One of the most blatant examples is Francis teaching the Talmudic formula: Yeridah Tzorech Aliyah (“decent for sake of ascent”).  This teaching simply means that one has to descend into sin, which paradoxically has a positive status in Hasidism, in order to ascend to new heights.  This is done because the god of Talmudic Judaism is one of opposites — a hermaphrodite god of good/evil.  In the Hasidic lore, tzaddiks (saints or righteous people) wrestle not with evil but with goodness as they descend into sin in this process in order to ascend into righteousness.  Yeridah Tzorech Aliyah is one of the foundational beliefs of Orthodox Talmudic Judaism along with Tikun Olam.  In the later belief the rabbis have the chutzpah to state that God made creation imperfect and the Talmudic Jews are to correct his work.

The Hasidism of Francis’ mind is also shown when he says such things as, “[Jesus] made himself the devil” and “the Holy Trinity [is] arguing behind closed doors but on the outside they give the picture of unity.”  Who else sees Jesus as a devil or God as a bunch of arguing rabbis other than a Talmudist?  Whether he his parroting the ideas of Heschel, Levinas, Buber, Wiesel, a dead rebbe from the Steppes, or having over rabbis as guests who often gift him with books (Gluck & Steinsaltz) there’s an excellent chance it’s comes from the Baal Shem Tov and his cult in one manner or another.

In the video clip below the late Chabad Lubavitcher rabbi, Menachem Mendel Schneerson, explains why Hasids should descend (into sin) in order to ascend — they are hunters getting ready to kill their prey.  Another late Chasidic rabbi, Abraham Heschel (of Vatican II’s Nostra Aetate), in a 1965 interview with Ma'ariv explained exactly whom the prey were, “There are those who would like to attack [Christians] bodies. I want to attack their souls.”  The elevation which takes place is one which will incorporate the prey’s soul into the of cult Talmudic Judaism and worship of their demonic hermaphrodite god.   It’s a total inversion of Catholicism, the religion instituted by Jesus the Christ.  So why is Francis teaching it?

Posted by hereisjorgebergoglio at 9:19 AM