Preaching “cannot be lukewarm. Preaching always - let me say this - “slaps”, it is a slap, a slap that moves you and carries you forward”.

And Paul himself says, “The madness of preaching. It is madness, because to say that God became man and then was crucified and then resurrected...In preaching faith there is always a “shred of madness”. And temptation is that false common sense, that mediocrity, “But, no, let’s not joke...”, the lukewarm faith”.

...“But the way they love each other! People told the first disciples recognizing their Christianity. Today, “one goes to some parishes and hears, what this one says about that one, and that one about this one.... Instead of thinking about how much the love each other, it makes you say, “But the way they “skin” each other”, “they are ripping each other.... the tongue is a knife to skin the other! And how can you transmit faith with such a gossip polluted air, full of slander?

source: La Stampa - Vatican Insider, The Pope: preaching is a slap, it cannot be lukewarm 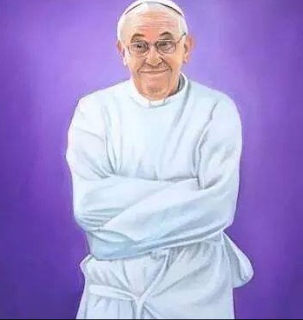 Francis is in need of being fitted for some new clothes.
Posted by hereisjorgebergoglio at 1:41 PM