Rabbi Abraham Skorka and his sin of omission 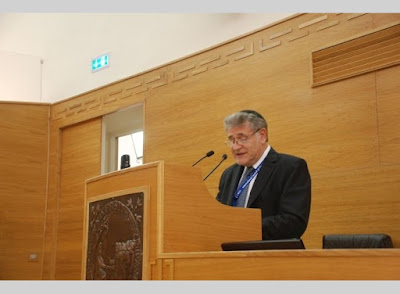 Rabbi Skorka has said publicly that he is Francis “roving ambassador” but it is more truthful to say that he’s Francis’ handler.  The rabbi gave a lecture, Nostra Aetate, past and future, at the International Council of Christians and Jews’ (ICCJ) Rome Conference 2015: ‘The 50th Anniversary of Nostra Aetate: The Past, Present and Future of the Christian-Jewish Relationship’.  In this speech Skorka explained that Christianity has play a key role in anti-semitism and that the Shoah demonstrates the futility of Christianity — its moral bankruptcy.  During his talk Skorka trots out the old canard that all the evidence of Pius XII has never been seen and states that,


“the issue of the role played by perennial Christian antisemitism in providing a seedbed for twentieth-century Nazi racism still awaits full exploration. A clear and unambiguous reckoning by Christians of all denominations is still expected by Jews with regard to all the components of Christian anti-Semitism, not only those found in the Patristic literature, but also those contributory elements that can be found in the New Testament, such as...”


Skorka then concludes with the following:


“For Catholics, the new approach and dialogue with Jews based on Nostra Aetate's theological statements, opens a theological quest: Since the "Old Covenant" has never been revoked, what does the living faith and practice of the Jewish People today mean for Christian faith and self-understanding? For Jews, the new relationship means to take more to heart Maimonides’ statement in his authoritative Code :


It is beyond the human mind to fathom the designs of the Creator; for our ways are not His ways, neither are our thoughts His thoughts. All these matters relating to Jesus of Nazareth and the Ishmaelite (Mohammed) who came after him served to clear the way for King Messiah, to prepare the whole world to worship God with one accord, as it is written, “For then will I turn to the peoples a pure language, that they may all call upon the name of the Lord to serve Him with one consent” (Zephaniah 3: 9) Thus the messianic hope, the Torah, and the commandments have become familiar topics –topics of conversation (among the inhabitants) of the far islands of many peoples . . .

There is still a long way before us until Nostra Aetate in its body and spirit will be incorporated into the heart of all the churches and parishes throughout the world, and to become a deeper challenge for Jewish vision on Christianity.

But still, the next step must be to think and to analyze the present dramatic moment in humankind’s history in order to continue paving a way for a better future. We have been given an opportunity to be "a blessing to one another," as John Paul II put it. It is therefore our duty in the years ahead to make the most of this unprecedented moment.”


We will only concern ourselves with the quote from Maimonides.  He uses the partial Maimonides quote taken entirely out of its context to sell the idea that Christianity is a branch of Judaism which will one day return to ‘true Temple worship’ in Jerusalem.  Unsaid in his speech but footnoted for the statement from Maimonides is: “Hilkhot Melakhim 11: 4, according the uncensored editions of Soncino 5250 (1490), Constantinopolis 5269 (150 9) and Amsterdam 5462 (1702). The translation was taken from Herschel’s essay quoted in the footnote No. 28, p. 248.”  The essay of Abraham Heschel referred to is “No Religion is an Island” published in “Abraham Joshua Heschel, Moral Grandeur and Spiritual Audacity, edited by Susannah Heschel, Farrar, Straus & Giroux, New York, 1996, p. 248”.  Here we have Skorka admit that there are uncensored editions of Maimonides quote however he uses Heschel’s edited one.  In 2012 Skorka published a paper titled, “Jewish Identity and Jewish-Christian Dialogue A View from Argentina”.  This paper examines Heschel’s “No Religion is an Island” and the themes it contains.  In it Skorka refers to the same quote, states that it only appears in uncensored editions of the Maimonides’ Mishneh Torah, and then quotes it from the Chabad-Lubutavitcher website:


“Ultimately, all the deeds of Jesus of Nazareth and that Ishmaelite [Mohammed] who arose after him will only serve to prepare the way for Mashiach’s [the Messiah’s] coming and the improvement of the entire world, motivating the nations to serve God together as Tzephaniah 3:9 states: “I will transform the peoples to a purer language that they all will call upon the name of God and serve Him with one purpose [Lit.: shoulder to shoulder].””


Here is where Rabbis Skorka’s sin of omission come into play.  The following is the quote in its context. 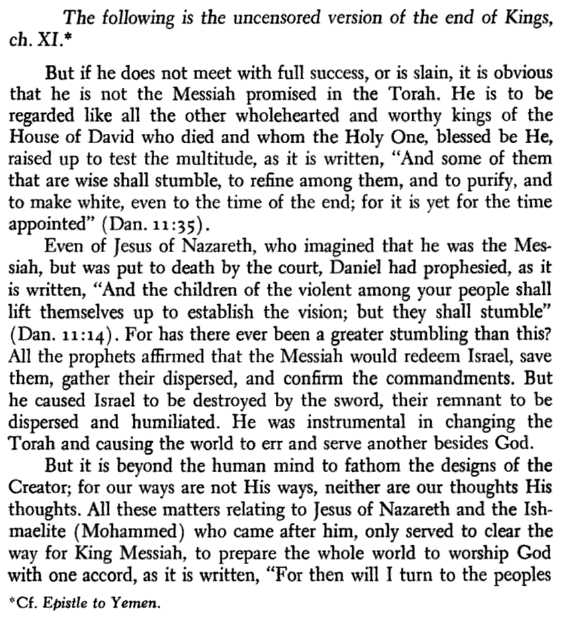 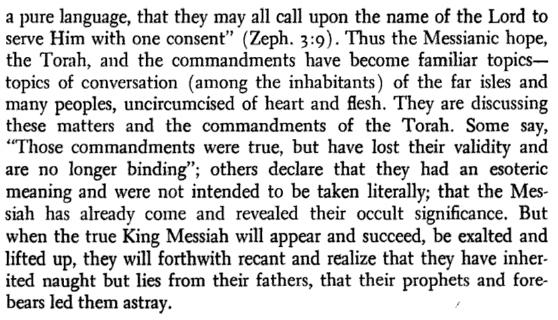 
To which we add that the Chabad website referenced prefaces the above with, 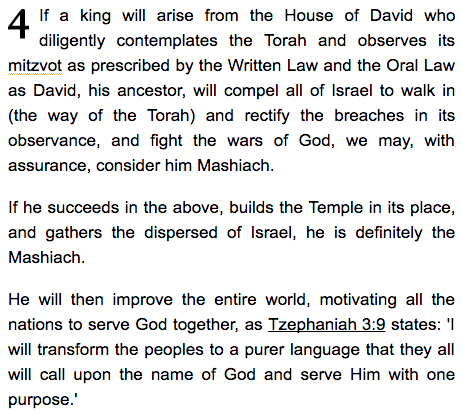 
Wow!  Skorka blames the Shoah on the Christians, has the chutzpah to state that all Christian denominations need to have their New Testament and writings of the early church fathers reexamined in order to cleanse, “[their] soul[s] of its role in contributing to anti-Semitism.”  Skora then has the audacity to be duplicitous towards his Christian audiences concerning what Talmudists truly believe about Jesus the Christ.   One can see from this that Conservative Judaism (Masorti Judaism) which Skorka professes isn’t very different from its kissing cousin Hasidism — for they are both Talmudic, lying, and deny Our Lord and Savior.  When will the ravings of the rabbis and their various Talmudic religions be reexamined by Catholics so they can be purged of their anti-Goyimism?

Don’t think for one instant that Francis is ignorant of any of this.  Recall in September 2017, Francis sat approvingly as Rav Dr. Ratzon Arusi said, “that we may work together to fulfill the vision articulated by Maimonides.”  Also, when he was but the cardinal archbishop of Buenos Aires he attended a museum exhibit in 2004 on Maimonides and a few years later in 2008 accepted the Maimonides Award for Inter-religious Dialogue!  Is it any wonder that Rabbi Skorka is Francis’ close personal friend? 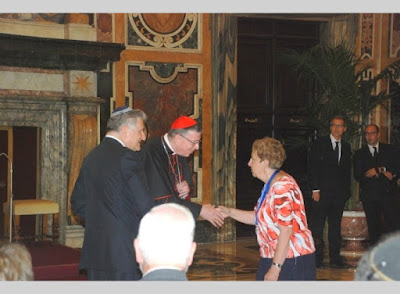 Posted by hereisjorgebergoglio at 12:51 PM