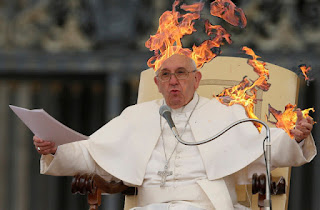 Raymond Arroyo gives a clear synopsis of the Chilean
Abuse Scandal and the role of Francis in it.

Francis lies with the regularity that the average person breathes.  He is constantly telling half-truths in his homilies and interviews intermixed with outright lies.  We previously covered how Francis uses the same strategy as Vladimir Putin does in ruling — both rule with confusion. In a future post on Vladimir Putin we will demonstrate how he like Francis believes communists to be Christians — both Putin and Francis are cut from similar cloth.  Below is an excerpt from the late Omar Bello’s El Verdadero Francisco (The True Francis).  Mr. Bello died in a suspicious car accident shortly after this book was published, in fact he predicted his own death.  Thanks to NovusOrdoWire for bringing this to our attention.


“You have to throw him out now!” Bergoglio demanded, raising his voice. The walls trembled. “Not one more day can this guy be here! Do you understand?”

He was referring to an employee of the Curia whom he couldn’t stand.

“Right away! Do you understand?”

“But he’s going to want to talk to you…”, one of the treasurers replied.

“I said to throw him out already. What language am I speaking?”

“Alright, Monsignor, we’ll throw him out right away.”

“Promoting to remove” is one of the most respected unwritten slogans of the Church. It sounds strange but someone who behaves badly can end up in a better position, yes, very far from the original place where he committed the offense. Of course, despite the motto, it is sometimes necessary to throw people out, and in those cases Bergoglio doesn’t abandon his tricks either. Once dismissed, the employee in question requested an audience with the cardinal and it was granted quickly, without asking questions.

“But I did not know anything about it, Son. You surprise me…”, the present-day Pope assured the dismissed employee when he told him of his troubles.

“Why did they throw you out? Who was it?”

The man left the cardinal’s offices without a job but with a brand new car as a gift, believing Francis to be a saint driven by circumstances beyond his control, dominated by a host of malicious assistants. The story of this dismissal is repeated even by the security officers of the Curia of Buenos Aires. 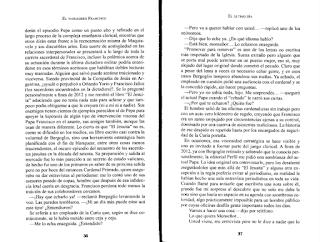 This excerpt clearly shows that Francis is a liar.  The level of skill with which he lies is extraordinary, for the one being lied to comes away thinking that Francis is a saint!  Below are a few links concerning sex crimes covered-up by Francis as well as his lies.  We at Call Me Jorge... are glad that the mainstream medias and the Catholic media are finally awaking to this long known truth about Francis.