Msgr. Pietro Amenta, bishop of Matera and member of the Vatican’s Roman Rota, pleads guilty to possession of 80 photos of child pornography 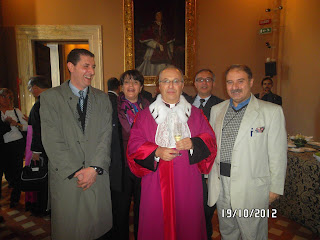 The happy day that the troubled prelate, Msgr. Pietro
Amenta, became a member of the Roman Rota.

The Roman Rota is the highest appellate tribunal of the Roman Catholic Church. The Roman Rota’s official records begin in A.D. 1171 however the famous Constitution of John XXII, Ratio Juris (16 December 1331) which lays out the form of the oath of office for the auditors and notaries of the Rota is considered by some historians as the beginning of the appellate tribunal.  Either way, the Church’s legal system is still the oldest in the West in use.  The Roman Rota judges by turns of three auditors and is essentially a court of appeal.  The cases before the Roman Rota  consist of litigation and criminal cases (excluding those reserved to the pope) and its jurisdiction extends over both citizens of the Vatican City and the faithful from all over the world.  Many of the cases before them deal with matrimonial nullity or annulments. 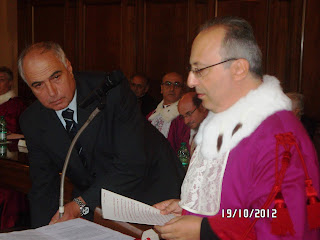 The moral perversion and rot goes all the way to the top in the Vatican.


On 19 November 2012, Pietro Amenta was sworn in as a member of the Roman Rota (see photos).  This appointment was carried out under the supposed hard-liner Benedict XVI.  We say supposed because Amenta was known at the time by the Carabinieri (Italian police) as the subject for a complaint of obscene acts in 1991 and for sexual harassment in 2004.  Shortly after being sworn in, Amenta filed a complaint with the Carabinieri after being robbed by two transsexuals. 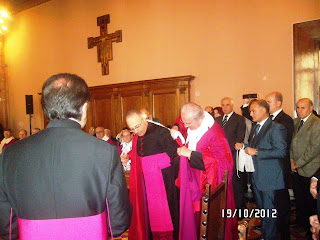 The homosexual pedophile putting his robes on.


Which bring us to the night of 2 March 2017 when an eighteen year old Romanian escorted his girlfriend to the Piazza San Giovanni di Dio, in the Monteverde, Gianicolense neighborhood in Rome for her evening classes.  While waiting for the school to dismiss, the Romanian went to a nearby market where Msgr. Amenta grabbed him by the genitals.  The Romanian complained but the prelate repeated the gesture again.  This rightfully set the Romanian off who began to complain loudly and Amenta proceeded to apologize explaining that there wasn’t much room between the stalls.  The Romanian, rightfully, wasn’t satisfied with this answer and told Amenta he wanted this incident reported to the police.  At this point Pietro Amenta said, “You do not know who I am...” and then fled the scene.  The Romanian gave chase and both were caught by an off duty municipal officer who then called the Carabinieri.  After the Carabinieri arrived they questioned both men and based on a clean record and a believable story let the Romanian go and detained Amenta.  The following day Msgr. Pietro Amenta’s home was searched.  In this search the Carabinieri found 80 pornographic photos with under age children as the subject matter on his computer.  When confronted with this evidence, Pietro denied having downloaded them.  He later changed his story, plead guilty in a plea bargain with the Italian court system.  Two days ago, Amenta was given a suspended sentence of one year and two months for two charges, one of sexual assault and the other, possession of digital child pornography. 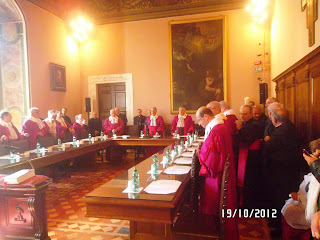 How many other sodomite perverts sit as judges on the Roman Rota?

This is the second case in the past year involving a Vatican official in possession of child pornography.  The other was Msgr. Carlo Alberto Capella, who worked in the nunciature of Washington, D.C..  Which bring us to humble Francis and his ‘zero-tolerance’ policy.  Unless Francis takes some action and soon, his self vaunted ‘zero-tolerance’ policy will be seen for what it truly is, ‘zero-tolerance’ for anyone who brings forth evidence of presiders committing acts of homosexual sodomy.  This shouldn’t come as a surprise, as what message has Francis been sending to the world when he has knowingly promoted and surrounded himself with homosexuals?  The unwritten message is that Francis too, belongs to this morally degenerate club.

Bp. Pietro Amenta resigns from serving as a judge of the Roman Rota 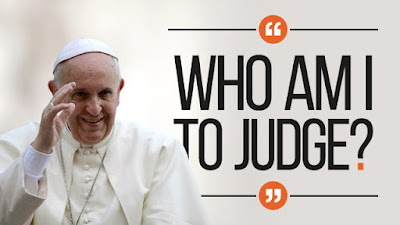 Posted by hereisjorgebergoglio at 7:27 PM