Put on your surprise face — rabbinic member of the Pontifical Academy Of Life says abortion is Biblical in certain cases! 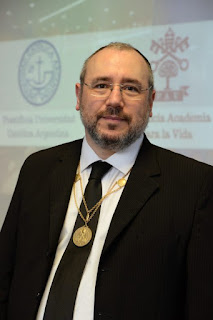 We have covered for some time, Francis’ appointment of two Talmudic rabbis to the Vatican’s Pontifical Academy Of Life and how this is an inversion of the academy’s original purpose. Francis said in an address to academy members,


“There is a real cultural revolution on the horizon of history at this time. The Church must, first and foremost, be part of it. In this perspective, it is essential to honestly recognize her weaknesses and shortcomings.”

We previously commented on this statement,


“Francis’ “real cultural revolution” is one which inculcates pewsitters into Noahides compliant with Halakhic law, further processing them into followers of the demented rabbis. We encourage readers unfamiliar with this topic to read [update on the new member of the Pontifical Academy Of Life — Rabbi Avraham Steinberg, M.D.] It should set the reader straight as to what Francis meant when he said in his address that he wants a, “deepening of scientific, anthropological and ethical knowledge, and in service to life.” Francis, in reality, desires a future for the Novus Ordo filled with man-made superstitions, pedophilia, and rabbinic racial supremacy.”


Well, yesterday one of the rabbis that Francis appointed to the academy, Rabbi Fernando Szlajen, wrote an article published on infobae, Aborto a demanda: el crimen como derecho, in which he explains that abortion is fine as long as it is committed under a particular set of circumstances, it’s also even Biblical!  Like the rabbi that he is, Szlajen talks out of both sides of his mouth.  He spends a good portion of the article wailing about unnecessary abortions and the evils of abortion but then gets to the rabbinic loophole for abortion and pins this squarely on the Bible.


“In only one case does the Bible demand an abortion, when the life of the conceptus [the embryo in utero] inexorably threatens that of its mother, resolving that as long as it has not been born, the woman's life is prioritized because her life comes first.  In such a said case, typified under the law of rodef, ‘pursuer’, it prescribes to kill whoever with certainty and effectively threatens the life of another, even when he is not aware of it. In cases of anencephaly, irreversible degenerative or terminal pathologies where the conceptus will inevitably die, typified as tzarrej gadol, ‘great need’, for the loss, causing the siege and the oppression of the person, abortion is allowed with severe restrictions in time and form. Similar criteria apply to women, pregnant from rape, being that they are in serious psychophysical state.”


And there you have it dear reader, a slow step by step inculcation of rabbinic morals which will result one day into a full blown Noahide initiation.  The responsibility for this rests directly on Francis’ shoulders.  Recall our previous posts where we demonstrate that Francis lies with regularity and often plays dumb to those whom he lies.  We expect nothing less than this if Francis is ever confronted on the matter.  Now returning to what Rabbi Szlajen wrote, no abortion isn’t Biblical it’s Talmudic.  If the rabbi had been truthful he would have explained, as we have on this blog, that the Talmud says all abortions are fine until the head of the baby leaves the uterus during birth because, “Before the baby is born, it is not considered a living soul, and it is therefore not subject to the halakhot (law) of murder.” (Koren Talmud Bavli: Sanhedrin Part Two, Jerusalem, 2017, p. 155.)  Further the rabbi would have told his readers that non-Jews do not possess the souls of men but of animals, in other words they do not have souls. 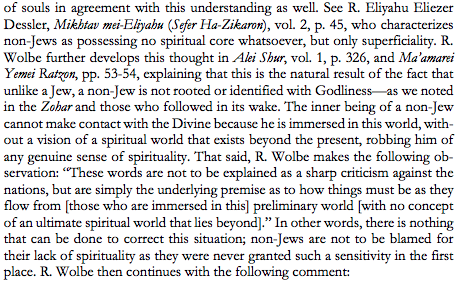 So the logical conclusion is that the two rabbis believe that abortion is acceptable for Jews as long as the head of the baby hasn’t left the uterus because that’s when the baby acquires its soul and for goyim or non-Jews abortion is okay any time because they don’t possess souls.  Any discussion contrary to this is just the rhetorical trick of pilpul which makes true rational discussion impossible — it’s a sideshow to make a dog chase its tail.  Dear reader, please educate yourself and others about these matters, make personal acts of reparation, and pray more fervently in order that those stuck in the rabbinic insane asylum may escape and learn that their Savior is Jesus the Christ.  Else those in the Novus Ordo church will continue down the perditious road they are on — resulting in the Vatican becoming a shtetl and the churches becoming synagogues with noahides sitting in the pews.

Posted by hereisjorgebergoglio at 4:11 PM