The occult significance of Francis’ #WeRemember photo-op — a supermoon, the number eighteen, and the olive tree 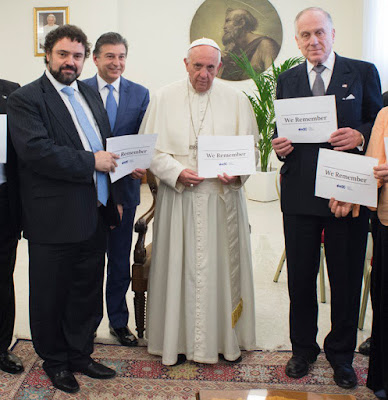 Last Tuesday, Francis celebrated International Holocaust Remembrance Day by meeting with delegates from the World Jewish Congress at the Vatican.  These meetings are important on several levels — two of them being the exchange of symbolic gifts (a form of twilight language) and the importance of dates clustered around the event.  Recall, last year for International Holocaust Remembrance Day Francis received the gift of a Babylonian wedding contract from Dr. Viatcheslav Moshe Kantor, president of the European Jewish Congress.  This year International Holocaust Remembrance Day officially occurred on Saturday the 27th but Francis like Vladimir Putin didn’t want to spoil the Talmudic Jewish Sabbath — hence Putin moved his observance of the Jewish holy day to Monday and Francis to Tuesday.

We wondered at the time why Tuesday?  The answer turned out to be fairly simple, Tuesday night was marked by the beginning of the supermoon. The NY Times explains, “A supermoon occurs when the moon is full at its closest approach to Earth. It appears about 30 percent brighter than an average full moon.” The following day, Wednesday the moon continued to be a supermoon plus a blue moon, and a total lunar eclipse (not visible in Italy).  How symbolic!  The Talmudic Jews believe that the moon is emblematic of Israel and the Shekhinah. 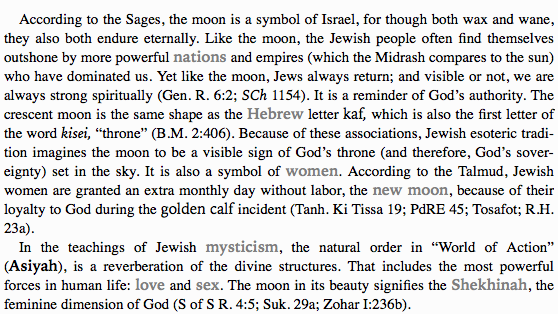 
So there you have it, the moon symbolizes the people of Israel and how they will never be conquered or extinguished as well as the Shekhinah, the feminine dimension of their hermaphrodite god.  All of this symbolism at the Vatican’s celebration of International Holocaust Remembrance Day.  But wait there’s more!

Ronald S. Lauder, “announced during the meeting that the World Jewish Congress would plant 18 olive trees in Israel in recognition of the Pope’s efforts.”  The number eighteen is highly symbolic to the Jewish people and their freemasonic golem.  During the preparations for the anti-Christian Seder meal the matzah is baked no more than eighteen minutes according to halakha.  The reason for this is:


Eighteen is also “in keeping with the Eighteen Degrees of Separation decreed by Beis Shamai and Beis Hillel in the first century A.D.” between the goyim and the Jews.  The eighteenth letter of the of the Hebrew alphabet stands for what else, “righteousness and humility”.  How fitting, eighteen olive trees planted in honor of the ‘righteous and humble’ Francis!

The Maurice Pinay blog in their entry Eighteen, further explains the interconnected symbolic nature of eighteen and the moon.

A half-light and half-dark moon represents duality. Kabbalists believe in a dualistic, half male, half female god. They believe Adam was created in the image of this hermaphrodite god. The number 18 tarot card also features a crayfish. The crayfish has occult significance for being able to impregnate itself, thus containing both the male and female principle and hearkening back to the pre-fall occult hermaphrodite mockery of Adam, the first man, and the utopian state which occultists seek to "return" to.” 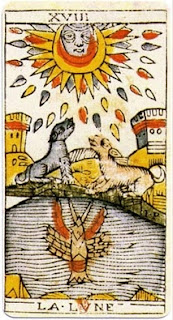 In Kabbalah, 18 is the numerical value of chai or "life." Chai is the name of the transcendent soul of Atzilut, the highest of the four Kabbalistic worlds of creation. Atzilut, literally, means "emanation."

Atzilut is the world of Divine emanation, wholly conscious of its Divine origin. The process of "emanation" is described in Chassidut as one of he'elem v'gilui ("concealment and revelation," i.e., the process of revealing the essence of that which had hitherto been concealed).

[according to] the theory of the cosmic aeons of the Sabbatians ... the Torah of atzilut ... is the "true" Torah which, like the "mystery of the Godhead" it makes manifest, has been in a state of concealment for the entire period of the exile. Now that the redemption has commenced it is about to be revealed and although it is identical with the Torah of beriah [creation], it's way of being read will be different, thus, all the prohibitions and commandments of the Torah of beriahwill now be reinterpreted in light of the World of atzilut, in which (to take but one example), as is stated in several Kabbalistic sources, there is no such thing as forbidden sexual practices ... The concept of the two Torahs was an extremely important one for Sabbatian nihilism ... (Gershom Scholem, The Messianic Idea in Judaism, pp.111-112)

The eighteenth degree of Scottish Rite Freemasonry is titled, "Knight Rose Croix" (knight of the rose cross). Rosicrucians are knights of the rose cross. In the 1615 Rosicrucian manifesto, Confessio Fraternitatis, it is stated that in the future the occult would make it's secrets known. Michael A. Hoffman refers to this era foretold by the Rosicrucians as the Revelation of the Method era, or the Making Manifest of all that is Hidden era. Albert Pike states that the 18th degree, Knight Rose Croix, teaches, " ...extinction of evil and sorrow, by a Redeemer or Messiah yet to come ..." (Morals and Dogma, p.287).

The occult is gambling that they have alchemically processed humanity to the degree that they will be able to reveal their secrets to us and we will do nothing about it; that the revelations will not free us but will only enslave us further. Will you allow them to win their wager?”


Returning to The Encyclopedia of Jewish Myth, Magic & Mysticism, one reads the following for the entry Olive: (/Ziyit) ;


“The olive tree is a symbol of peace and...longevity. Zechariah learns that the olive tree symbolizes the never-ending bounty of divine beneficence... The Rabbis believed that eating olives enhances one’s ability to memorize Torah [Talmud]...Most overtly magical practices involve the leaves of the olive tree. Chai ben Sherira Gaon describes the belief that throwing olive leaves inscribed with divine names at bandits will paralyze them. One Hechalot formula requires the adept to eat olive leaves in preparation for summoning the Sar ha-Torah.” (pp. 489-90)


In our previous entry, The symbolism of the gifts Francis received and gave while at the Great Synagogue of Rome or Francis’ occult day at the synagogue, we demonstrated the Kabbalists believe the olive tree to symbolize the Menorah, which is representative of, “Talmudic Jews as they realize their divine status, as they collectively perfect themselves, [they] are actually perfecting God himself.”

So to sum it all up, we have a photo of Francis, the Vicar of Christ, holding a sign that reads #WeRemember (as in the Holocaust and it’s magical 6 million) on a day there was a supermoon which symbolizes the female side of the Jewish hermaphrodite god as well as Israel.  Then the head of the World Jewish Congress states “18 olive trees” will be planted in Israel in honor of Francis.  These “18 olive trees” represent Israel, the Talmud, life, and the divine status of the Jews.  Nary a mention of Jesus the Christ — just as the Talmudists like it.

#WeRemember a time when the Vicar of Christ was a Catholic and the Faith instituted by Our Savior, Jesus the Christ, could be found in Churches throughout the world instead of today’s modernist mocking Noahide Novus Ordo masquerading as the Truth.

Posted by hereisjorgebergoglio at 3:00 PM