The racial supremacy of Talmudic Jews

How does the Talmud view non-Jews?


In our post, Merry “Rainbow” Christmas — the fruits of the goy following the seven noahide laws, we covered what the Jewish sages and rabbis have to say concerning the goyim who follow the seven noahide laws and are called the Righteous of All Nations as well as what they will receive in the “world to come.”  We revisit the answers for those who may not have read it.  Keep in mind that Michael Voris’ Church Militant, LifeNews, and LifeSiteNews promote these anti-Christian rabbinically created laws on their websites.


The righteous of all Nations will be rewarded in their lives only by virtue of their attachment to Israel whom they’ll be subordinate to as clothes. 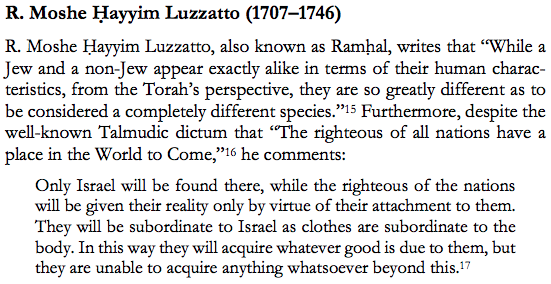 source: The Soul of a Jew and the Soul of a Non-Jew An Inconvenient
Truth and the Search for an Alternative by Hanan Balk, p. 50.

The above mentioned reward is the only thing that the Noahides will receive, for when they die they shall inherit Hell!

source: Rabinical Literature: Or, The Traditions Of The Jews, Contained in
Their Talmud and Other Mystical Writings, Volume 2, p. 10.

Wow, what a deal!

Who would want to be a believer in Jesus the Christ and a member of His Church when one could instead be a Righteous Among Nations by being a Noahide?

More on the ‘noahide’ laws:

Posted by hereisjorgebergoglio at 8:33 PM