Pope Francis – A Man of His Word (a Wim Wenders’ film)

“when I became a believer… you know I identified as a Christian and was reading the bible a lot, but the moment I really began to believe in Jesus Christ, I left the church.” — Wim Wenders

‘In Conversation with Wim Wenders and Donata Wenders’, ASX (16 December 2015)

“I had the highest regard for Pope Francis before I ever met him, just from seeing him on television and from reading his sermons or his encyclicals. But meeting him eye to eye, and then also seeing and hearing him every day in the editing room, not only in our own interviews, but also his many talks all over the world, to refugees, prisoners, politicians, scientists, children, rich or poor or regular people, made me realize how courageous he was, how fearless. And that would be my wish: that he never loses that relentless courage. Whenever he left our set, the last thing he said was: “Pray for me!” And that wasn’t just his way of saying good-bye, he meant it. And I’ve heard him ask the same from people all over the word. So that would be my other wish: that he is carried by all those prayers for him, from all these people (including my little film crew) for whom he represents a man whose word we can trust in. That has become such a rare and precious thing today: a man who is not acting for himself, but for the common good.” — Wim Wenders 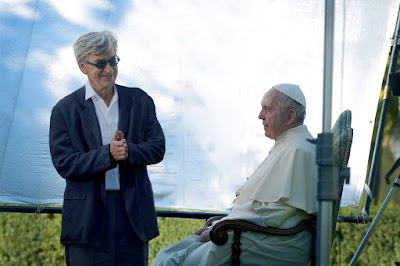 Two revolutionaries — a director and his actor.
Posted by hereisjorgebergoglio at 1:07 PM