Why does Francis insists so strongly that Islam is peaceful? 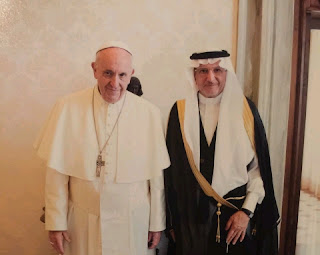 After meeting with Talmudic rabbis, Francis most popular guests are imams and Islamicists.  Every time he meets with one of the Moslems he says something along the lines of how peaceful the Moslem ‘religion’ is.  Francis had a private audience with Dr. Yousef bin Ahmed Al-Othaimeen this past Friday.  The statement which has come out is no exception.

During the meeting both sides emphasized the importance of interfaith dialogue and raising the voice of wisdom and tolerance to combat extremism and terrorism. The Secretary General emphasized to His Holiness that terrorism has no religion, and that OIC condemns all terrorist acts coming from any religion.

Al Othaimeen presented his thanks to the Pope for his stand on the issue of Al Quds [Jerusalem] and the basic rights of the Muslims and Christians in the holy city. Both sides were in agreement on the cause of Palestine and Al Quds [Jerusalem].

Al Othaimeen also appreciated the position of the Pope on many issues such as promoting human rights and migration, expressing his thanks to Pope Francis for his position on the Rohingya Muslims and their rights. The Pope from his side expressed his support to the basic rights of the Rohingya, adding that their suffering has been going on for a long time, and he thanked neighboring countries, specially Bangladesh for hosting them.

The Pope also appreciated OIC’s position against terrorism, and stressed that there is no link between Islam and terrorism.

The Secretary General also met with His Eminence the Secretary of State of the Vatican Pietro Parolin. They discussed cooperation and importance of dialogue between both sides and continuous contact.


Here we have a representative of the Moslems thanking Francis for his stand on Jerusalem.  Francis said of Jerusalem, “I wish to make a heartfelt appeal to ensure that everyone is committed to respecting the status quo...”  The status quo is the de-Christianization of Jerusalem and Israel.  Why would Francis also stress,“that there is no link between Islam and terrorism”?  The answer is a fairly simple one, Francis serves the machinations of the rabbis — therefore Islam is acceptable since it’s the fulfillment of the Noahide Laws — Christianity is considered Avodah Zarah (idol worship) and worthy of death.   Hence, Moslems are given a free pass and Catholics who profess the Faith are condemned.  Francis’ rabbinical buddies do not want non-Jews to covert to Talmudic Judaism instead the Talmudists want the non-Jews to convert to one of the acceptable forms of servile Noahidism.  So now you know why Franis insists that Islam is peaceful.

Posted by hereisjorgebergoglio at 11:15 PM