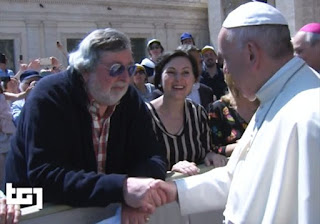 
During last week’s general audience, Francis met with an alleged 12,000 people from the Dioceses of Bologna and Cesena-Sarsina.  One of the VIPs who sat in Francis’ private box was none other than Francesco Guccini.  For non-Italians not familiar with Guccini, he is famous for his 1967 song ‘Dio è morto’ (God Is Dead) and,


“has always declared himself an anarchist and agnostic, but it is also true that in several interviews he declared his admiration for the Bergoglio Revolution feeling that it is “true and close to the message of Jesus.”...

And it is well known that his beautiful and popular song, God Is Dead, was censored in 1967 by the Rai channels where they had not been able to understand the content, which is in fact very clear in the final stanza. Only Vatican Radio broadcasted the song and Paul VI praised the message and the words that speak of a God that is dead “in the extermination camps... With the myths of the race.... With the party of hatreds” but that if “He dies for three days and then rises again... In what we believe... In what we want... In the world we will make.”

I saw
people my age going away
along the streets that never lead to anything,
looking for the dream which leads to insanity
searching for something they do not find
in the world they already have,
inside the nights which are wet by the wine,
inside the rooms changed by the tablets 1,
along the clouds of smoke
in the world made of cities,
being against swallowing
our tired civilization

I was told
that this generation of mine by now does not believe
in what has often been disguised with faith,
in eternal myths of the motherland or the hero
because by now has come the moment to deny
everything that is falsity, faiths made of habit and fear,
a policy that is just progressing in a career,
the concerned respectability, the dignity made of void,
the hypocrisy of who is always with righteousness and never with injustice


Simply, the type of person a pontiff would want to meet with.  It’s not like Francis is causing scandal to the faithful or the young.  Francis the ‘humble’ dictator is just continuing in his shunning of traditionally minded music and acceptance of purveyors of filth (Patti Smith and Suor Cristina are two that come to mind) whom he has had as guests at his general audiences.

Guccini has also stated publicly that Francis’ best attributes are his, “profound simplicity” and his “honest consistency.”  So we have an agnostic anarchist singer who declared, “God is dead” in his most famous song and that “God will rise again” when anarchy and chaos create the world that they, “believe”, “want”, and “build”.  It’s not a stretch to infer that in Francesco Guccini’s mind, Paul VI helped kill God and Francis is building the world that anarchists and agnostics want therefore he is bringing God’s resurrection (spoken of in the song) one step closer.  At heart, it’s the Lurianic Kabbalah’s ‘tikkun olam’ or the repairing of the imperfect world which was created by God.  How blasphemous, heretical, and modernist!


Posted by hereisjorgebergoglio at 11:18 AM