The Vatican’s ‘Unite to Cure’ Conference is the gift which keeps on giving.  On Saturday, Dr. Oz (Mehmet C. Öz, MD) gave a talk followed by a discussion with Max Gomez, PhD, and Monsignor Dario Edoardo Viganò.  The presentation was laughably titled, ‘Fake News and the Ethical Responsibilities of Media’.

Dr. Oz is a surgeon who plays a doctor on television for Oprah — a queen of fakery.  He is so well known for giving fake medical advise on his television program (less than 33% of his recommendations can be backed up by even modest medical evidence & 40% of his medical advice appears to made on the basis of no evidence at all) that a paper has been published in the BMJ (British Medical Journal) on this very topic.

Also participating in the discussion was Max Gomez, another television doctor who does short stories for the New York City news and the national news as well as often cites medical studies which cannot be replicated in these stories as factual.  For a randomly picked example of his style of fake news see the video below.

Next we have the infamous head of the Vatican’s #FakeNews department, Monsignor Dario Edoardo Viganò, on the panel to discuss “ethics” and “fake news” with Dr. Oz.  Sadly, he doesn’t mention his first hand experience in creating #fakenews with his role in the Vatican’s #lettergate scandal.  And to top it all off, this discussion take place at a conference that is supposed to be scientific.  As we wrote in the title, someone has a sense of humor at the Vatican. 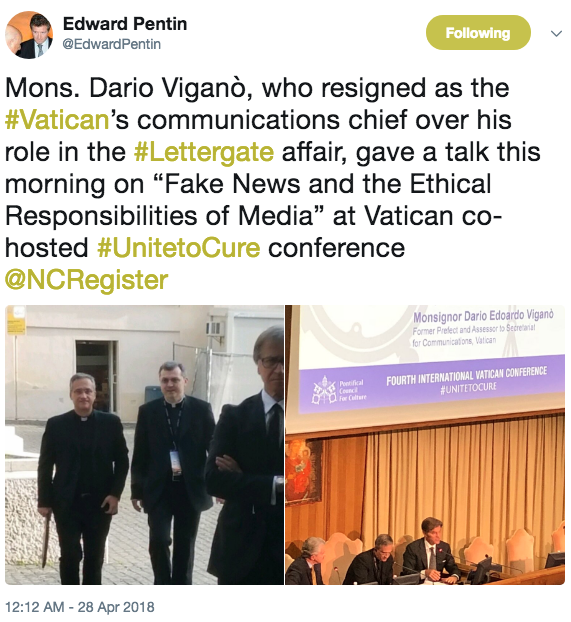 
Below is a random video that Dr. Max Gomez made for the television news, “Opioid deaths are helping meet the need for Organ Donations”.   It’s filled with #fakenews.  The biggest being that the opioid addict who ‘died’ and ‘donated’ his liver.  If the truth was being reported, Dr. Max Gomez would have told his viewers that the ‘organ donor’ was murdered by his fellow doctors and was actually only “brain dead” which isn’t truly being dead.  In New York State, a doctor has to determine the following for ‘brain death’:

If a patient fails these tests the doctors then perform an Apnea Test in which they take the patient off the respirator to see if he or she can breathe on their own.  Failure to do so is being ‘brain dead’ and makes the patient a prime victim to be murdered so that the doctors and hospital can make further money off of the victim — all in the name of saving lives.  Talk about not being honest in your profession as a reporter or doctor!  For those interested in a more in depth discussion on ‘brain death’ and ‘organ donation’ we highly recommend the work of Dr. Paul Byrne who has spoken at the Vatican on the topic and the Life Guardian Foundation.  An introductory video on this subject can be watched by clicking here.


Now we turn to Dr. Oz’s presentation on #fakenews and the discussion which took place after his talk.  Dr. Oz has a wide definition of what constitutes #fakenews and shares his un-scientific fake study on #fakenews as if it’s scientific.  For some reason Dr. Oz exempts himself as a member of the lame stream media and as a broadcaster of #fakenews.  He wants to clamp down on unapproved news sources such as blogs like Call Me Jorge....  He, the other doctor, and the monsignor come across as upset that the mainstream media is losing control of what constitutes as news.  Unhappy they have lost their monopoly they recommend creating a bureaucracy which they will oversee as gatekeepers to see that #fakenews can no longer exist.  They say that #fakenews is malpractice and can harm people — as if they are victims of #fakenews and never the spreaders of it.  Monsignor Dario Edoardo Viganò one of the Vatican’s creators of Francis #fakenews towards the end states that Adam and Eve lying to God in the Garden of Eden was #fakenews.  This is the pot calling the kettle black.  They all agreed that one should have a sense of healthy skepticism (yes this is good) and then claimed to be able to sift through data to see if it is true or not.  Medical doctors are not statisticians and in general should get a F in this field.  This is far worse than the blind leading the blind, for the road to hell is paved with good intentions, and all three of these clowns believe they are the truth when they are the spreaders of #fakenews.  Watching the three one gets the sense that they are dinosaurs in the tar pit grasping at straws.

Posted by hereisjorgebergoglio at 8:39 PM