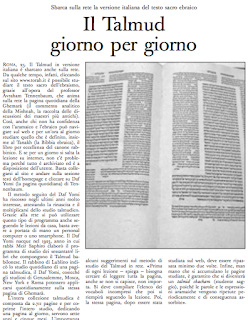 
One that slipped through the cracks and we at Call Me Jorge... just came across is that the L’Osservatore Romano published an article on 26 aprile 2013, Il Talmud giorno per giorno.  Here we have one of the instruments of the Vatican press extolling that the anti-Christian Talmud is available online and further praising the same website for offering daily lessons (which take seven years in total) which supposedly demonstrate that the Talmud is ‘biblical’ when it is if fact the opposite as the Talmud seeks to nullify the word of God whenever possible and substitute it with the man-made delusions of the Talmudic/Kabbalist rabbis.  The Talmud accomplishes this by commenting on much from the Tanakh pretending as if it is the word of God instead of the contrivances of 10th century and Renaissance rabbis. That this article was published a little less than one month and a half after Jorge Bergoglio was elected to the office of the papacy is no mere coincidence.


Will those that complete all the Daf Yomi celebrate
Siyum HaShas at Stadio Olimpico in Rome?
Posted by hereisjorgebergoglio at 9:04 PM