Want to know what Francis’ position on abortion is?

Then, just look at his scandalous actions. 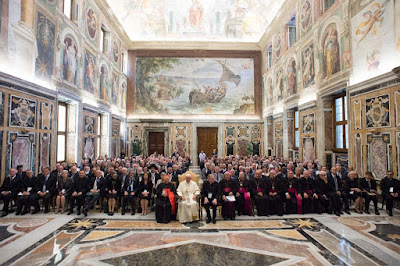 Francis had an audience with the members of the Pontifical Academy Of Life on Monday, 25 June 2018, in the Clementine Hall where he gave an address.  Afterwards, Francis met with some of the members of the academy including the two pro-abortion rabbis (Rabbi Avraham Steinberg, M.D. & Rabbi Professor Fernando Szlajen) he appointed to it.  No where in his address did Francis condemn abortion, instead he uttered a bunch of hollow platitudes, talked about his program of gnostic environmentalism (global bioethics), and appealed to the ethics, values, and wisdom of those in attendance.  Let’s see, what are some of the ethics, values, and wisdom of rabbis Steinberg and Szlajen?  A few of the ethics of Rabbi Steinberg are: gentiles should be put to death for committing abortion but Jews shouldn’t be, pedophilia rape is OK, blood has magic abilities, the first man Adam was a hermaphrodite, etc... One of the value$ that Rabbi Szlajen teaches is, the Bible demands abortion in only one case “when the life of the conceptus [the embryo in utero] inexorably threatens that of its mother.”  He then goes on to justify this by citing, “the law of rodef, ‘pursuer’.”  We don’t know about you, but we have yet to read a Bible which sanctions abortion or cites ‘the law of the rodef’.  We have read the Talmud though, which says almost verbatim what Rabbi Szlajen wrote.  This noahidzation of the church is what Francis means when he says he wants a, “deepening of scientific, anthropological and ethical knowledge, and in service to life,” and “there is a real cultural revolution on the horizon of history at this time. The Church must, first and foremost, be part of it.” 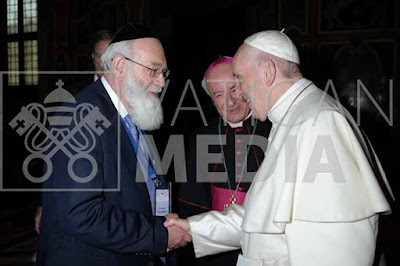 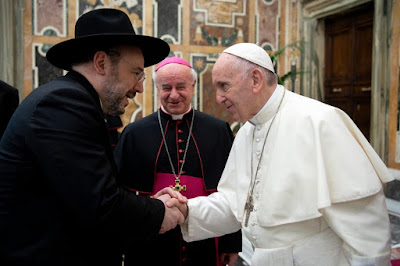