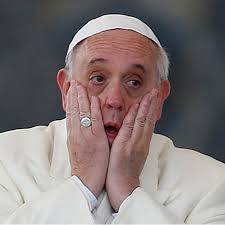 “As far as the Roman Curia is concerned, for the moment I will stop here, even if the names of other prelates in the Vatican are well known, even some very close to Pope Francis, such as Cardinal Francesco Coccopalmerio and Archbishop Vincenzo Paglia, who belong to the homosexual current in favor of subverting Catholic doctrine on homosexuality...Cardinals Edwin Frederick O’Brien and Renato Raffaele Martino also belong to the same current, albeit with a different ideology. Others belonging to this current even reside at the Domus Sanctae Marthae.

I began the conversation, asking the Pope what he intended to say to me with the words he had addressed to me when I greeted him the previous Friday. And the Pope, in a very different, friendly, almost affectionate tone, said to me:  “Yes, the Bishops in the United States must not be ideologized, they must not be right-wing like the Archbishop of Philadelphia, (the Pope did not give me the name of the Archbishop) they must be shepherds; and they must not be left-wing — and he added, raising both arms — and when I say left-wing I mean homosexual.” Of course, the logic of the correlation between being left-wing and being homosexual escaped me, but I added nothing else.

Immediately after, the Pope asked me in a deceitful way: “What is Cardinal McCarrick like?” I answered him with complete frankness and, if you want, with great naiveté: “Holy Father, I don’t know if you know Cardinal McCarrick, but if you ask the Congregation for Bishops there is a dossier this thick about him. He corrupted generations of seminarians and priests and Pope Benedict ordered him to withdraw to a life of prayer and penance.” The Pope did not make the slightest comment about those very grave words of mine and did not show any expression of surprise on his face, as if he had already known the matter for some time, and he immediately changed the subject. But then, what was the Pope’s purpose in asking me that question: “What is Cardinal McCarrick like?” He clearly wanted to find out if I was an ally of McCarrick or not.

I want to recall...the grave, disconcerting and sinful conduct of Pope Francis and by the conspiracy of silence of so many pastors, and who are tempted to abandon the Church, disfigured by so many ignominies. At the Angelus on Sunday, August 12, 2018 Pope Francis said these words: “Everyone is guilty for the good he could have done and did not do ... If we do not oppose evil, we tacitly feed it. We need to intervene where evil is spreading; for evil spreads where daring Christians who oppose evil with good are lacking.” If this is rightly to be considered a serious moral responsibility for every believer, how much graver is it for the Church’s supreme pastor, who in the case of McCarrick not only did not oppose evil but associated himself in doing evil with someone he knew to be deeply corrupt. He followed the advice of someone he knew well to be a pervert, thus multiplying exponentially with his supreme authority the evil done by McCarrick. And how many other evil pastors is Francis still continuing to prop up in their active destruction of the Church!

Francis is abdicating the mandate which Christ gave to Peter to confirm the brethren. Indeed, by his action he has divided them, led them into error, and encouraged the wolves to continue to tear apart the sheep of Christ’s flock.

In this extremely dramatic moment for the universal Church, he must acknowledge his mistakes and, in keeping with the proclaimed principle of zero tolerance, Pope Francis must be the first to set a good example for cardinals and bishops who covered up McCarrick’s abuses and resign along with all of them.”


In the eleven page document written by Abp. Vigano, names are named and specifics are given.  Is this a sincere case of a modernist wanting heartfelt correction or simply a rat aboard the S.S. Novus Ordo scurrying around trying to cover his rear end? (see here & here)

For the full document:

Things are getting mighty interesting aboard the S.O.S.
Novus Ordo with Francis as the Captain!


Abp. Vigano has clarified his role in the above mentioned  matter in St. Paul-Minneapolis: