Bp. Fellay, “we are Catholics and the modern church recognizes us as Catholics.”

“Our situation is now as follows: first, and I can give you statements from Rome that say very clearly that the Society is not schismatic. So we are Catholics and the modern church recognizes us as Catholics. But they say there is something irregular because you do not have canonical status. And they do not want to give us this canonical status before we say that the new Mass is good and the council is good. And we're not going to say it, so we're stuck here. At the same time, you have heard that the Pope gave us the power to confess everyone. Everyone can come with us, not only our faithful, everybody, and the priest has the power to give confession. This is true also for the Last Rights, that is for the Extreme Unction, and recently we have also, in a curious way, the power for marriages. It is even more than that. Just to show you that even if there are certain things which are not yet complete, on the other side many things that are already written down, where Rome is accepting us as Catholics. I give you some examples. For example, if a priest is doing very, very bad, so he needs to be punished. And so the superior, which was myself, I contact Rome and say I'm sorry one of our priests did a big thing and several time Rome did appoint myself as the judge of the case. So I think tribunal know in the name of Rome on one or several of our priests even one times they appointed me as the tribunal of second instance what is Rome made the judgement, the priest appealed against this decision from Rome, and Rome didn't recognize that they made a mistake, and they asked me to be the second judge for that case. How can this be if we are not Catholics? You see? Here we have examples in real life which shows that they consider us as Catholics. Though they say that everything is not yet finished. It is true, we all recognize that. We all say who made the first mistake?”
— conference with Bp. Fellay, St. Joseph Priory, Davao City, Mindanao, Philippines, (3 September 2018). 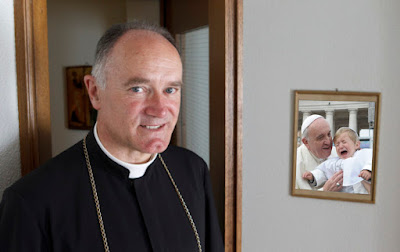 Break out the champagne, the modernists recognize the FSSPX as one of their own!

So much for not collaborating with Modernist Rome...
Posted by hereisjorgebergoglio at 12:40 PM