Wuerl to Francis the Most Humble

‘Donna’ Wuerl, “Yes, and I said that. I made errors of judgment when we were dealing with all those cases before the Dallas Charter. Some of those errors in judgment were based on professional psychological evaluations, some of the errors were based on moving too slowly as we tried to find some verification of the allegations. Those were all judgmental errors, and I certainly regret them. I think it is also worth noting that all those priests who were faced with allegations in my time there, if there was any substantiation for them they were removed from any ministry that would put them in contact with young people. I think what we can say is that a careful reading of the [Pennsylvania grand jury] report and the Diocese of Pittsburgh’s response, which the Pennsylvania Supreme Court allowed to be attached to the grand jury report, shows that I acted in a very responsible way to remove predator priests. What is important now is to be able to move beyond the questions of doubt, fallibility and not concentrating on myself but helping this church to get to a new place.”

Francis the Most Humble to Wuerl

Francis, “Your nobility has led you not to choose the way of defense. Of this, I am proud and thank you. In this way, you make clear the intent to put God’s project first, before any kind of personal project, including what could be considered as for the good of the church. Your renunciation is a sign of your availability and docility to the Spirit who continues to act in the church.”

‘Donna’ Wuerl, “In my read of that testimony, particularly the part that touches me, it is not faithful to the facts. There can be reasons for that, and I think Cardinal Ouellet is touching on what may be the primary one. In his testimony, Archbishop Viganò clearly says that there were secret sanctions in some form. But he also says himself that he never communicated them to me. Yet this should have been his duty. I find it difficult to accept his version that he holds me responsible for implementing something he never passed on or his gratuitous insult that I must be a liar when I say that I never received these secret sanctions. Certainly I would never have guessed that there were sanctions against Cardinal McCarrick from all the times I encountered him at receptions and events hosted by Archbishop Viganò at the Apostolic Nunciature. The gap between what he says and what he did and his easy calumny call into question for me the real intent and purpose of his letter.  I think there’s something radically wrong with any document that doesn’t provide proof for accusations of that gravity.”

The key word being “allegation”

‘Donna’ Wuerl, “I have clarified over and over again that during the 12 years that I served as archbishop of Washington no one ever brought me any allegation of misconduct, sexual misconduct by Cardinal McCarrick.”

Now all that’s left is for Francis to choose another kosher
member of the Gay Lobby™ to replace Wuerl! 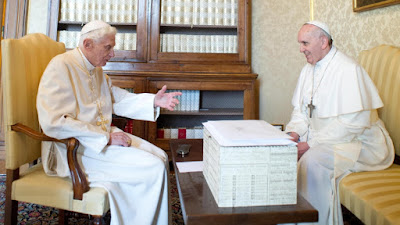 The outgoing president of the The Gay Mafia Mutual Admiration Society™
hands over the membership roster to the new president.
Posted by hereisjorgebergoglio at 2:56 PM