Leonardo Boff and Francis are old pals from back in the day who share more than a few bizarre anti-Catholic revolutionary views. Boff is considered one of the co-creators of liberation theology, and believes that a ‘spirit’ (demon) whispers to him and made him understand that god is a hermaphrodite. Not surprisingly, Francis used Boff's writings as a foundation for his envirocyclical, Laudatio si'. Just the type of person whom Francis would want the support of as well as throw his support behind.

Pope Francis is suffering great opposition from some of the Roman Curia and, interestingly, also from conservative members of the Trump government, backed by conservative and even reactionary groups of the American Catholic Church, led by Cardinal Viganó.

Showing support for Pope Francis, I wrote him a letter, as I have done at other times. It was sent through the Argentine ambassador to the Holy See, Valdés, under the government of Cristiana Kirchner, and Francis answered me through him. The same was done in writing the encyclical Laudato Sí: on the care of the Common House, thanking me for my modest collaboration.

Here I show the letter of thanks for my support to him with the best wishes for my 80 years of life.

Here is the letter:

Thank you for your letter sent by Fr. Fabian.
I am happy to receive it and thank you for the generosity of your comments.

I remember our first meeting, in San Miguel, at a meeting of the CLAR, there for the years 72-75. After that I followed you, reading some of your works.

For these days you will be celebrating 80 years. I send you my best wishes.

And please do not forget to pray for me. I do it for you and your Lady.*
May Jesus bless you and may the Blessed Virgin care for you.

*Below is a photo of Boff with his Lady, Márcia Monteiro da Silva Miranda. Trouble is that Boff began his relationship with this then married mother of six when she was his secretary.  For the first 12 years of their affair she spent two nights a week cohabitating with Boff.  The two tried to keep it a secret but after the affair became public his secretary divorced her husband and moved to cohabitating with Boff full-time.  By Francis’ logic, it must be a true marriage! 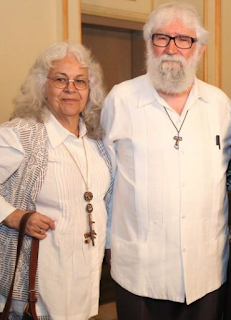 Posted by hereisjorgebergoglio at 2:33 PM