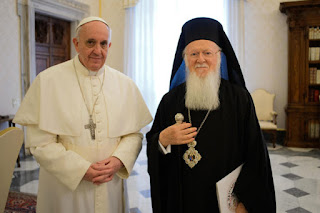 Much has been made over Francis’ encyclical, Laudato Si’, and his inauguration of a new day of prayer for creation.  Many have decried the encyclical and the World Day of Prayer for the Care of Creation and rightfully so but few have reported where this foreign concept comes from.  One only need look at the first paragraph of his letter for the declaration of this day to find out.

“Sharing the concern of my beloved brother, Ecumenical Patriarch Bartholomew, for the future of creation (cf. Laudato Si’, 7-9), and at the suggestion of his representative, Metropolitan Ioannis of Pergamum, who took part in the presentation of the Encyclical Laudato Si’ on care for our common home, I wish to inform you that I have decided to institute in the Catholic Church the “World Day of Prayer for the Care of Creation” which, beginning this year, is to be celebrated on 1 September, as has been the custom in the Orthodox Church for some time.”

LETTER OF FRANCIS FOR THE ESTABLISHMENT OF THE "WORLD DAY OF PRAYER FOR THE CARE OF CREATION" [1st SEPTEMBER], Vatican website, 6 August 2015.

Let’s examine what the book, Conversations with Ecumenical Patriarch Bartholomew I, has to say about the Feast of Creation (Care of Creation) on pages 99-100. 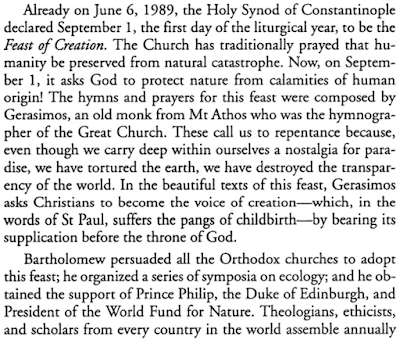 It appears to us at Call Me Jorge... that Ecumenical Patriarch Dimitrios was seeking to carve out a larger role for the Orthodox church in the New World Order and his successor, Ecumenical Patriarch Bartholomew I, has picked up the ball and run with it.  Exactly what entails ‘saving’ the planet? 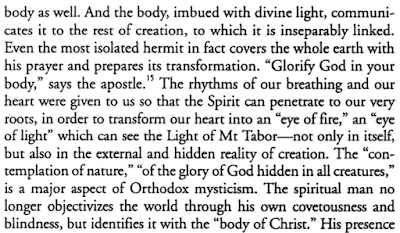 The above is from pages 105 and 106 of Conversations with Ecumenical Patriarch Bartholomew I - Olivier Clément, (1997). One should read the entire fifth chapter ‘Transfiguring the World’ from this book (click here) just to see how crazy the whole idea is.  For not only does it incorporate the above nuttiness about the Tabor Light but it also wants radically revise the cosmology into a dialogue between man and God via ‘ressourcement’, the Kabbalah, the Koran, and a slew of mystical Asian religions.  The Greek and Russian Orthodox believe the Tabor Light is the uncreated nature of light that was manifested to Jesus' disciples on Mount Tabor at the Transfiguration.  The Light of Tabor was formulated in the 14th century by Gregory Palamas defending the mystical practices of Hesychasm. When considered as a theological doctrine, this view is known as Palamism after Palamas.  Hesychasts believe by saying the ‘Jesus prayer’ over and over in the manner of a mantra while sitting in a pose similar to a yogi while focusing their thoughts and eyes on their hearts that the adepts will see the Tabor Light.  Who knew that this occult mumbo jumbo was the key to healing the environment?

In public statements, Bartholomew I, has said that man is responsible for global warming and climate changes. These two things threaten humanity’s existence and nature’s balance.  He also stated that the earth is full of “material” and “spiritual” garbage and the above mentioned occult mumbo jumbo, “can revive its worn out spiritual nature” along with “asceticism”.

Did you get that?

Get ready for more global laws in the name of saving the environment along with occultism while living in the poor house.

And remember if you hear someone tell you that Francis came up with this insidious plan, tell them no he did not, “the Orthodox religion did in 1989!” 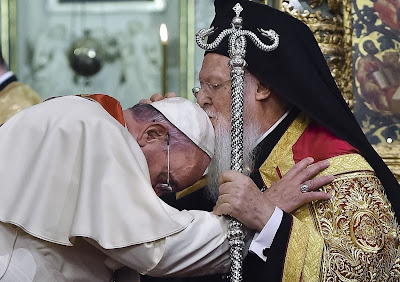 Bartholomew I and Francis sharing a ‘spiritual hug’ along with a ‘spiritual kiss’.
Posted by hereisjorgebergoglio at 7:02 PM