Francis giving the Birkat Kohanim blessing in the Sephardic manner.


To welcome in the new year, on Tuesday 1 January 2019, Francis decided to scrap the usual Catholic blessing invoking the Father, Son, and Holy Ghost, and replaced it with the Birkat Kohanim blessing.

And today the liturgy refers to the very ancient blessing with which the Jewish priests blessed the people. It states: “The Lord bless you and keep you: The Lord make His face to shine upon you and be gracious to you; The Lord lift up His countenance upon you and give you peace” (Numbers 6:24-26). The priest repeated God’s name, “Lord,” thrice, extending his hand over the assembled people. In the Bible, in fact, a name represents the reality itself that is invoked and so, “to put the name” of the Lord on a person, a family, a community means to offer them the beneficial strength that flows from Him.

“Unfortunately, Bergoglio didn’t think it worth mentioning that the fact that the Lord’s name is invoked three times is a prefigurement of the Holy Trinity, just as is the threefold invocation of God as “the God of Abraham, the God of Isaac, and the God of Jacob” (Ex 3:6), and as is perhaps the visitation of Abraham by three angels who “appeared to him [as] three men” (see Gen 18:1-3). No, the Trinity does not make an appearance in Francis’ Jan. 1 Angelus at all, not even, as we just saw, in the final benediction.” 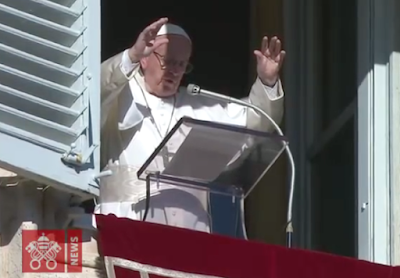 The still above is taken from this video where Francis begins the Birkat Kohanim at 10 minutes & 34 seconds mark by raising his hands and saying,

“The Lord bless you and keep you: The Lord make His face to shine upon you and be gracious to you; The Lord lift up His countenance upon you and give you peace”

These words are in agreement with the description the Jewish Encyclopedia of 1906 provides for the Birkat Kohanim,

source: The Jewish Encyclopedia: A Descriptive Record of the History, Religion, Literature, and Customs of the Jewish People from the Earliest Times to the Present Day, Volume 3, entry — BLESSING, PRIESTLY, p. 244

We return to the still frame. In it, Francis is holding his hands and head in the style done by the Sephardic Jews as explained by the Chabad Lubavitcher website, 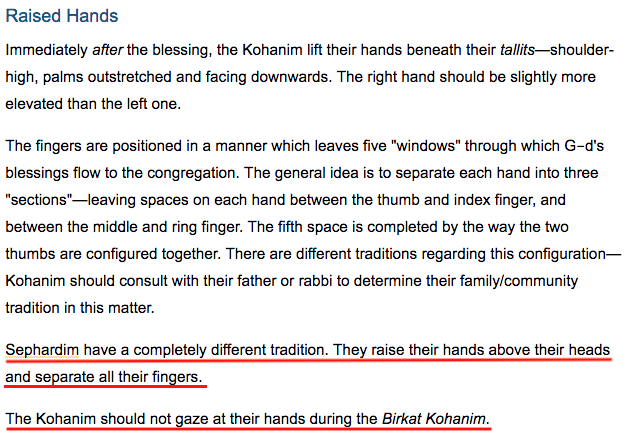 Knowing Francis’ penchant for all things Talmudic, his claim that he has an inner-Jew, his homilies filled with anti-Christian rabbinical ideas, his telling of blasphemous jokes to Jewish friends, and his vast collection of Judaic books, it should come as no surprise that Francis pulled another fast one.  In 2016, Francis received for his 80th birthday a replica of the oldest Birkat Kohanim known from his good friend and often guest at the Vatican, Rabbi Isaac Sacca. What amazes us at Call Me Jorge... is that while everyone is arguing over who the pope is (Francis or Benedict), the Viganò allegations, or is mesmerized by Francis’ redefinition of the papacy hardly anyone notices as Francis slowly and methodically incorporates Talmudic Judaism into the Novus Ordo.  As we grow tired of writing, Francis and his cronies will not be content until St. Peter’s resembles a synagogue and the Vatican a shtetl.  With this Birkat Kohanim ‘blessing’ another nail has been hammered into that coffin.

Thanks to NovusOrdoWire who brought this New Year’s ‘blessing’ to out attention.
Posted by hereisjorgebergoglio at 9:56 PM