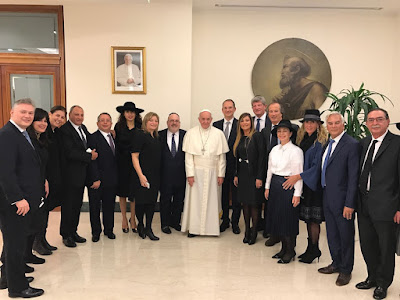 The international delegation from Menora and the birthday boy at Casa Santa Marta.


Rabbi Isaac Sacca is the Senior Rabbi of the Sephardic Jews in Argentina & the founder and president of Menora, Organización Judía Mundial para la Juventud (Menora, World Jewish Organization for Youth).  The purpose of Menora is to spread the Talmud and the Kabbalah among the Jewish youth of the world by educating them about their powers.  Sacca brought a group of his fellow Talmudic Jews who back his causes to the Vatican to meet with Francis as well as celebrate his 80th birthday with a kosher cake, of course! This post from Sacca’s website explains it:


Pope Francis received Rabbi Isaac Sacca and an international delegation from Menorah, with representatives from Argentina, the United States, England and Italy.

For more than an hour, they discussed, among other things, about the idea of ​​Argentina exporting to the world its capacity for harmony and peace among different faiths. They also talked on education initiatives for tolerance and respect among peoples and different action plans to make the society noble, just and inclusive.

Rabbi Sacca gave Pope Francis a replica of the Birkat Kohanim (Blessing of Priests) from the oldest Bible found.

The colored note was the kosher cake that Rabbi Sacca and the delegation of Menora presented to the Pope for his birthday, which read: H.H. Pope Francis Happy Birthday.

Pope Francis gave each guest a coin of the Jubilee.

It has been another unforgettable encounter between Pope Francis and Rabbi Sacca, two religious who seek to leave a message of hope to the world, based on deep knowledge, infinite merciful faith, sincere respect and a proactive action for the common good. 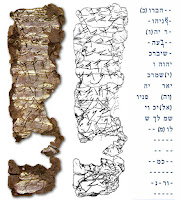 In 1979 Gabriel Barkay found two tiny silver scroll amulets with different versions of the Birkat Hakohanim dating back to the 7th century B.C. at the Ketef Hinnom archaeological site southwest of the Old City of Jerusalem, Israel.  Above is a photograph of the scroll KH2 with transcription of its letters. 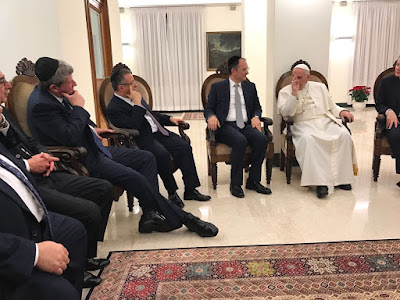 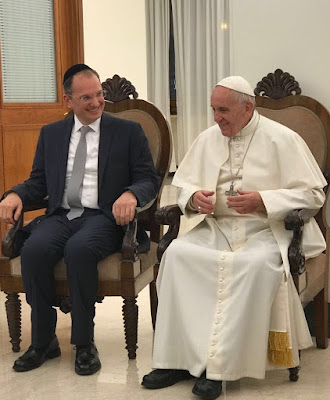 Francis must have been tickled pink to have received a replica of the Birkat Kohanim. 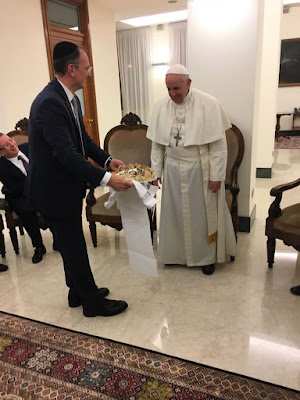 They had to celebrate the birthday one day early because it fell on the Jewish Sabbath. 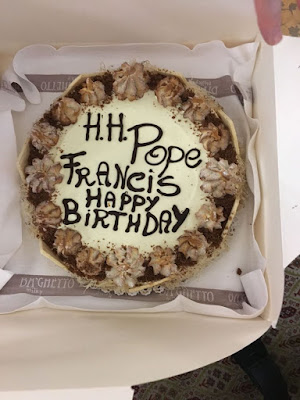 Don’t worry it was kosher and from Francis’ favorite Jewish restaurant in Rome, Ba’Ghetto.

Posted by hereisjorgebergoglio at 2:14 PM