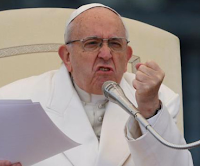 The book, Pope Francis and Interreligious Dialogue Religious Thinkers Engage with Recent Papal Initiatives, edited by Harold Kasimow and Alan Race contains a foreword by Rabbi Abraham Skorka.  In the conclusion of the foreword (p. xxi) Rabbi Skorka writes, “I gave him several books by Rabbi Abraham Joshua Heschel, the great prophetical master of the twentieth century, and Heschel’s name frequently cam up in our conversations.”  Truer words couldn’t have been written.  For if there is one well from which Francis consistently draws his anti-Catholic, heretical, and blasphemous ideas from it is Hasidism.  In a 4 January 1965 interview for Ma'ariv conducted by Geula Cohen, Rabbi Abraham Heschel had this explanation for his dialogue with Catholics, “There are those who would like to attack [Christians’] bodies.  I want to attack [Christians’] souls.”  Francis like his dead spiritual mentor wants to attack Christians’ souls and turn the world into one giant Yiddish ghetto.  There’s good reason he’s referred to by Talmudists as “the great Rabbi Bergoglio”.

Posted by hereisjorgebergoglio at 10:51 PM