Malachi Martin was named after an Iberian Jewish banker ancestor


A blast from the past. Below is the entirety of an interview-article from 1974 with Malachi Martin. In this one reads that “Martin was the Rev. Dr. Malachi Martin, SJ, scholar, papal agent and aide-de-camp of Cardinal Bea, a moving force in the Vatican Council of the 1960s. He was laicized and is a U.S. citizen today,” and we also learn where Malachi got his unusual first name, “Martin, son of an Irish mother and English father, carrying the "Christian" name of an Iberian Jewish banker-refugee who married into the Martins of County Galway three centuries ago”.  These aren’t the only bombshells, “Martin is harshest regarding the Roman Catholic Church, possibly because it has failed him and he sees it failing masses in similar ways”.  How did the Catholic Church fail Martin who was a known womanizer, political operative, who questioned Jesus the Christ and everything His Church is?  It was Martin who failed.  Lastly, “Martin is dissatisfied with the section of his book [The New Castle] on Judaism: "I failed to capture the face of beauty" in Judaism, he said, feeling this more intensely, he added, because he believes "the Jews are the physical footprint of God in the world," proof God has been here and cares.” So let’s see, a bunch of people who follow the blasphemous heretical Talmud and practice magick from the Kabbalah who most likely were converts to these beliefs are “proof God has been here and cares”?  Sorry Mr. Martin, but the, “proof God has been here and cares” is written about in John 3, 16-17 “For God so loved the world, as to give his only begotten Son; that whosoever believeth in him, may not perish, but may have life everlasting. For God sent not his Son into the world, to judge the world, but that the world may be saved by him.”

This article in and of itself is proof enough from the mouth of Malachi Martin himself of what his ancestry was and where his name originated.  It is no mere allegation and should shut up once and for all, all those people who are in denial and continue to deny this fact. To sum up, Malachi Martin was “laicized”, named after and the descendant of “an Iberian Jewish banker”, was a harsh critic of the Roman Catholic Church for being anti-semitic at its core and not liberal enough, and unsurprisingly believed that, “the Jews are the physical footprint of God in the world”.  It’s sad that anyone reads what this laicized flim-flam man wrote or listens to his unbelivable interviews in expectation of finding even a modicum of Catholicism in them. 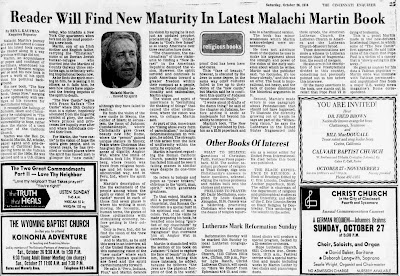