Francis’ address to the Pontifical Biblical Institute and participants in the Conference ‘Jesus and the Pharisees: An Interdisciplinary Reappraisal’


There is so much wrong with Francis’ address he gave today that one could write an entire pamphlet on the twelve paragraphs.  We will concern ourselves with only one small part.

“Rabbi Aqiba, one of the most famous rabbis of the second century and an heir to Pharisaic traditions,[1] pointed to the words “love your neighbour as yourself”(Lev 19:18) as a great principle of the Torah.[2] According to tradition, he died as a martyr with the Shema on his lips, which includes the commandment to love the Lord with all one’s heart, soul and strength (cf. Dt 6:4-5).[3] As far as we can know, then, he would have been substantially in agreement with Jesus and his scribe or Pharisee interlocutor. Likewise, the so-called Golden Rule, albeit in various formulations, is attributed not only to Jesus but also to his older contemporary Hillel, usually considered one of the leading Pharisees of his time. The rule is already present in the deuterocanonical book of Tobit (4:15[16]).

Love of neighbour, then, represents a significant indicator for recognizing affinities between Jesus and his Pharisee interlocutors. It certainly constitutes an important basis for any dialogue, especially among Jews and Christians, even today.”

Sounds good doesn’t it?  Well, not exactly.  Once again Francis plays on the ignorance of the pewsitters.  Rabbi Aqiba, more commonly known as Rabbi Akiva or Akiba ben Yosef, has many problems.  For starters, he compiled a Torah in which he included the rabbi created Halakahic laws and set out to destroy the credibility of the Gospels. Next, the rabbis teach that Akiva, also one of the greatest Sages of the Mishnah, was the gilgul (reincarnation) of Cain.   Let’s examine the Shema which Rabbi Akiva was reciting when he died. The Shema is an obsession of Francis and gives a clue to his hasidism.  “The Shema, [is] the pledge of allegiance to the People of Israel” and is an anti-Catholic polemic as it repudiates the Catholic dogma of the Holy Trinity.  It’s a verbal version or what the Jewish kippah would later come to represent, that Jesus the Christ isn’t the Messiah.  Speaking of messiahs,  Akiva believed Simon bar Kokhba was the messiah and endorsed him in an armed revolt against the Romans. This was a little over one hundred years after Jesus the Christ ascended into heaven.  The Romans ordered Rabbi Akiva to stop his teachings, he disobeyed, and consequently he was sentenced to death.  So this rabbi, according to Francis, died as ‘martyr’ while reciting an anti-Catholic polemic. How touching!  We are not finished yet.  The biggest omission Francis the Hasid commits, is when he states, “Rabbi Aqiba... pointed to the words “love your neighbour as yourself” as a great principle of the Torah.” Let’s look this one up and see what Sifra, Kedoshim, Chapter 4, 12 actually states,

One reads... Akiva, ‘you shall not bear a grudge against your people [Jews] but you can take revenge and bear a grudge against idolators [Catholics] and you shall love your neighbor [Jews] as yourself.’ That’s a very different interpretation (one which is Judaic Supremacist) from the one Francis is falsely teaching — what the Pharisees believed is no different than what Jesus the Christ taught.

Following this Francis subtly implies that Jesus learned the Golden Rule from the Pharisee Hillel.  Hillel was one of the founders of Rabbinic Judaism and as MauricePinay writes, “Hillel who overruled God's law on divorce and allowed divorce for any reason; who nullified God's 7 year release of debts and created loopholes for incest by defining it as "not sex" is absolutely, 100% certainly not from God.”  According to Talmud, Shabbat, Daf 31a, Hillel said, “What is hateful to you, do not do to your neighbor: that is the whole Torah while the rest is commentary; go and learn it.”  As explained, in the Talmud this is the concept of ‘Ahavas Yisrael’ or “love for one’s fellow Jews”. Nissan Dovid Dubov further explains, “the whole purpose of the Torah [Talmud] is as a means to reveal the essence of the Jew.”  One can plainly see that contrary to what Francis wants you to believe, there are no “affinities between Jesus and his Pharisee interlocutors” when it comes to the two great commandments, “Thou shalt love the Lord thy God with thy whole heart, and with thy whole soul, and with thy whole mind. This is the greatest and the first commandment. And the second is like to this: Thou shalt love thy neighbour as thyself. On these two commandments dependeth the whole law and the prophets.” (Matthew 22, 37-40).

If Francis were concerned with converting the Talmudic Jews, he would tell them that they worship false gods and follow the false teachings of their rabbis. He could start by showing how the rabbis pervert the two of greatest commandments of God and through their ‘holy books’ denigrate God’s words.  Instead, Francis the Hasid spends his time trying to convince pewsitters that Talmudic Jews are “one of the sacred roots” (Evangelii gaudium, #247) of Catholicism.  How satanic and sick. 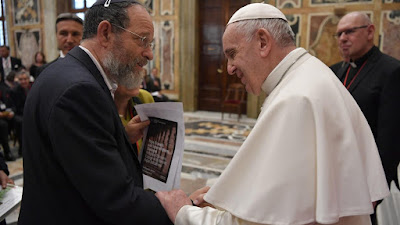 Posted by hereisjorgebergoglio at 4:07 PM