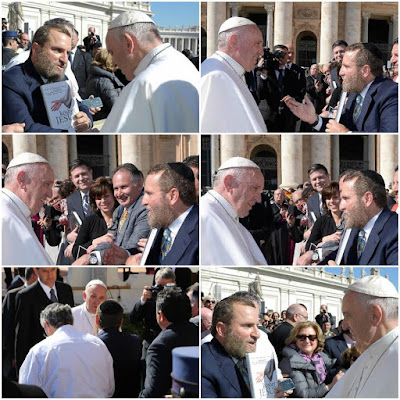 Thanks to the connections of Gary Krupp, the president of the Pave the Way Foundation, Chabad-Lubavitcher Rabbi Shmuley Boteach has met not one but two pontiffs after public general audiences.  Krupp is so influential in the Vatican that he was named a Knight Commander of the Order of St. Gregory the Great by John Paul II in September 2000 and also got special permission for rabbis and Talmudic scholars to access the Vatican Library among other things.


“thanked [Francis] for his courage in announcing last year that the Catholic Church would no longer be targeting Jews for conversation and acknowledged that Jews and people of other faiths can go to heaven.

He implored the Pope to take a further courageous step and protect not just the Jewish soul but the Jewish body.

“Your holiness,” he said, “the Jewish people are under threat around the world, with rising anti-Semitism especially here in Europe, and constant murderous attacks in Israel. As the foremost moral voice and spiritual personality in the world, your condemnation of anti-Semitism in unconditional terms and acknowledgement that there is no difference in hating Israel and hating the Jewish people, is vital. Israel is hated simply because it’s the Jewish state.”

Stating that clearly and unequivocally, Rabbi Shmuley continued, would provide a moral bulwark against the enemies of the Jewish people, especially as forces like BDS attempt to destroy Israel economically and demonize the Jewish nation.

“Iran, Hamas, and Hezbollah all profess genocidal intent against Jews and Israel,” Rabbi Shmuley said. He asked the Pope to condemn the incitement in the strongest terms.

The Pope responded to Rabbi Shmuley by asking him to pray for him. Rabbi Shmuley responded that the he and the Jewish people were always praying for the welfare of the Pope, wishing him God’s blessings in achieving this vital and noble aim.

“The Pope is a man of immense warmth and caring and he listened intently to my heartfelt plea to protect my people in an age where irrational hatred of Jews is growing. I will do as he asked and pray that this hatred subsides, with the Pope joining the chorus of those who condemn in absolute terms the vilification of Israel and Jewry.”” 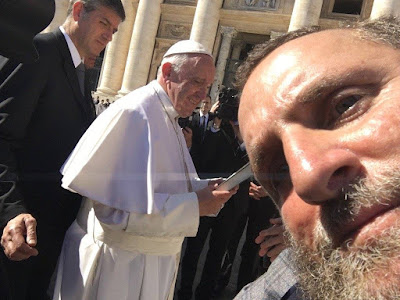 Francis with his copy of Kosher Jesus.

The other thing that Rabbi Shmuley Boteach did was give Francis another rabbinical book for his growing library of Judaica.  Boteach presented Francis with a copy of Kosher Jesus which is right up Francis’ alley.  Rabbi Boteach also told Francis his reason for writing this book was threefold,

“The first was to highlight the Jewishness of Jesus. The second, to educate about the Jewish origins of the Christian faith and how the only religion ever practiced by Jesus was Judaism. And the third was to create a theological bridge of understanding between Jews and Christians in an era where Christians have emerged as some of Israel’s greatest supporters and defenders.” 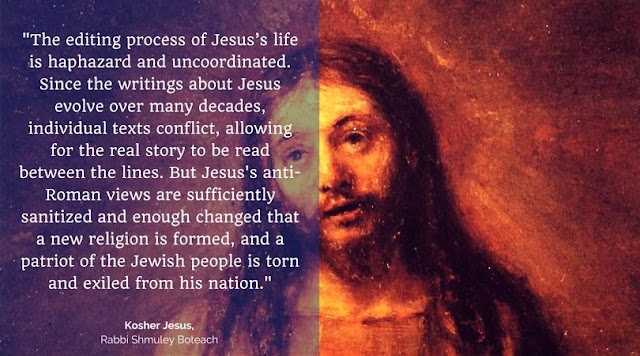 At a party for the book’s launch in 2012 Boteach said,

“"This book is telling the Jews to reclaim Jesus, the authentic Jesus, the historical Jesus, the Jewish Jesus" and to be inspired by his "beautiful" teachings, the U.S.-born author and TV show host told Anglo File this week in Jerusalem. "It's asking Christians to make an effort to enrich their Christianity through an understanding of the Jewishness of Jesus."

"Suddenly we have evangelical Christians emerging as the foremost supporters of the state of Israel," he said. "We have this political alliance. What is a lacking is a theological bridge."

"Christians don't know the Jewish Jesus," Boteach continued. "They know the Christ-divinity but not the Jewish man Jesus. There's a need to discover the humanity of Jesus."

"Kosher Jesus" amalgamates research (mostly by Hyam Maccoby ) which suggests that the gospels give the wrong impression of Jesus. "There was a lot of embellishment and editing," Boteach said. "We have to remember Paul [the apostle] never met Jesus. He cannot offer us a first-hand account of Jesus' life."

Christian scripture "doesn't add up" when it portray Jesus as a self-hating Jew, or when it lists sins that allegedly led Jews to condemn him, Boteach said. Jesus never declared himself God or meant to abolish Jewish law, he asserts.

And the fact that Jesus thought of himself as the messiah shouldn't bother Jews, he insists: "I could declare myself the messiah right now. There's nothing blasphemous about this," Boteach said. "I even encourage people to have a certain messianic tendency in their lives, a desire to redeem the world."

Boteach said he regrets that Jews allowed Jesus "to be ripped away from them without even a fight."

"We just accepted a Christian interpretation of his life and narrative," he said. "One of the most influential people of all time is seen as a Christian who loved the Romans and said about the Jews that they are all the children of the devil."

But "Christian ideas of Jesus as divine messiah emerged as a savvy adaptation following the destruction of the Second Temple," Boteach explained. Once Jews understand that, he writes that they "can take inspiration from Jesus' often beautiful ethical teachings and appreciate Jesus as a devoted Jewish son who became martyred while trying to lift the Roman yoke of oppression from his beloved people."


Getting Christians to believe that Jesus was a Jew and not the promised Messiah, the Son of God, is the first step of inculcating them into Noahidism.  So to wrap things up we have rabbi from a family of weapons dealers (here, here, here, here) with a strong connection to the Chabad mafia (here, here) meet with Francis.  This same rabbi commends Francis for fighting the enemies of Israel and condemning them as “anti-semites” and proceeds to give Francis a book that teaches Jesus was nothing more than a Talmudic Jew. 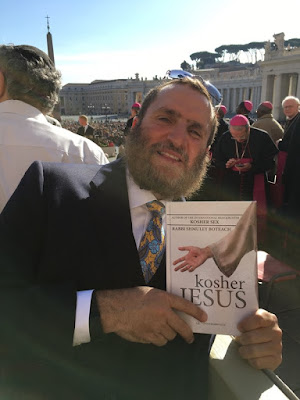 Posted by hereisjorgebergoglio at 10:42 PM