Francis’ rabbinical chums drop by the Vatican for a visit 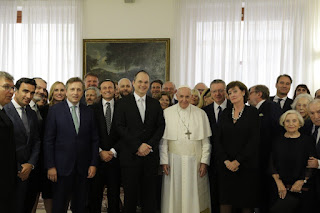 Rabbi Isaac Sacca and his fellow Talmudists stop by for some one-way dialogue.


TO CONTRIBUTE TO WORLD PEACE

I’m excited and very grateful to have been received again by Pope Francis, in a meeting in which we agree that dialogue, understanding and respect between cultures and religions is the way forward to achieve world peace. Focused on this great objective, Pope Francis received the Jewish Hispanic Foundation, whose works are guided by this spirit, headed by its president, David Hatchwell and other prominent members, such as Alberto Ruiz-Gallardon, who was Minister of Justice of Spain, Alicia Koplowitch, Nacho Cano and Juan Luis Cebrián.

During the meeting, the need to awaken man to act for the common good from the religious perspective of each of the creeds was agreed upon (as well as), accepting the differences and ideas of others. 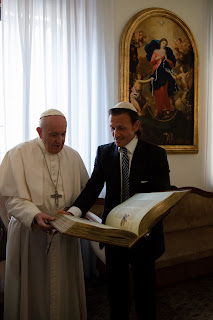 The president of the HispanoJudía Foundation, David Hatchwell giving Francis a facsimile of the Alba Bible.


...the Pope recalled fondly his childhood in Argentina where he had the opportunity to live with children of different religions in especially Jews with whom he shared vital experiences and values ​​that made him grow and become what he is today, a man of peace. David Hatchwell took advantage of his visit to give to the Pontiff a facsimile of the Alba Bible, dating from 1422, which was translated from Hebrew to Spanish by Rabbi Moises Arragel [of Guadalajara], commissioned by the great master of the Order of Calatrava, Don Luis de Guzmán . The goal at the time was to teach the clergy the Jewish heritage of Christianity and the construction of bridges between cultures. That is precisely the objective of the [HispanoJudía] Foundation, which was founded three years ago to build emotional bonds that allow us to rebuild a world of respect, empathy and values ​​where the sanctity of human life is respected.

“Rabbi Arragel took pains to make the Alba Bible a legacy of the Golden era of Sephardic scholarship, boldly avoiding concessions to Christian thinking. He included in his commentary extracts from rabbinical writings and the Quabbalic Zohar, and illustrations specifically depicting Jewish scriptural interpretations and religious objects.”


“The Alba Bible, with its 513 folios and 334 miniatures, is a powerful work of visual art. But still more significant is the vast commentary it contains. Rabbi Moses showed great independence and courage, and his translation and commentary make few concessions to Christian thinking, although he must have been aware of the dangers awaiting both him and the Jewish community. It is rich in extracts not only from rabbinical writings such as the Targumim, Midrashim and Talmud, but also from later works such as the Zohar - the source book of Jewish mysticism. Rabbi Moses may well have given the artists detailed instructions on the illustrations, furnishing them with specifically Jewish interpretations of biblical scenes. The resulting images are also very important as cultural records, since contemporary weapons, musical instruments, furniture and costumes are all depicted...no other extant manuscript contains so many rabbinically inspired miniatures. For instance, Cain kills Abel by biting his neck like a serpent, exactly as is described in the Zohar. Similarly, religious objects from the Temple are depicted just as in Hebrew Bibles of the same period.”

Historical Background, The Alba Bible: A superb example of manuscript illumination - the very first translation of the Hebrew Bible and glosses into Castilian, Facsimile Editions.


“The Alba Bible contains a series of comments on the writing of both Jewish and Christian theologians, including Abraham ibn Ezra, Maimonides, Nahmanides, R. Joseph Kimhi, R. Asher ben Jehiel, Shlomo ben Aderet, R. Ya'acob and Nissim of Gerona. There is also commentary taken from rabbinic literary sources such as the Talmud and the Midrash.” 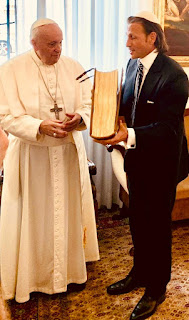 “I was given the opportunity to meet the Pope—not on or in a line, not in a large group, not in a delegation, but in an intimate setting: his private residence at the Vatican.

Along with me were:

Rabbi Isaac Sacca, the Chief Rabbi of the Sephardic Community in Argentina. As such, he is a friend and colleague of Padre Jorge Mario Bergoglio—Bishop, then Cardinal, and now, Pope Francis. They have remained close as Jorge Mario Bergoglio ascended the Papal ladder (eventually becoming the 266th pontiff of the Roman Catholic Church), and they maintain their friendship and discussions from Buenos Aries to the Vatican, where Rabbi Sacca is a regular visitor.

My good friend, Mitchell Presser, a Partner at Freshfields, one of the largest and most prestigious multinational law firms. He is a close friend of Rabbi Sacca’s and has accompanied him to the Vatican before. With him, his son DJ, a computer science student at Columbia.

Rabbi Meir Soloveichik is the Chief Minister of Shearith Israel, the oldest Jewish congregation in the United States also known as the Spanish Portuguese Synagogue. He is a world-renowned writer and speaker and friend and Rabbi to both Mitchell and myself.

And then there was me. Together, our Fellowship to the Pope was complete. Two Rabbis, a lawyer, his son and an Ad guy.

I have long admired this Pope, and truthfully, meeting him was on my “secret, sure it would never happen, bucket list.” Yet there I was, in a small room in the Pope’s residence, sitting across from one of the most holy, and certainly most humble, people on this earth.

Pope Francis never lost touch with Rabbi Sacca and they continue to e-mail with one another directly—no intermediaries. Extraordinary. And, as you can see, he encourages his friend to bring more friends and expand the circle…how else can you be on top of what is real and not?” 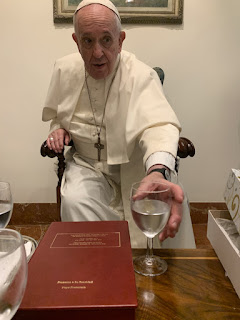 Francis only uses glass as he “has an eco-aversion to plastic.”


In an act of brotherhood, the Pope and the Great Rabbi Isaac Sacca delivered, in Hebrew and in Spanish, the Aaronic prayer [Birkat Kohanim] to all the participants.

If and when  Rabbi Isaac Sacca writes more about this encounter, we will update this post.

More on Francis and the Birkat Kohanim: 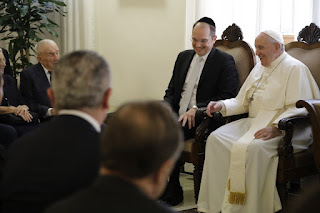 Francis smiling with his revolutionary crony.
Posted by hereisjorgebergoglio at 9:34 PM