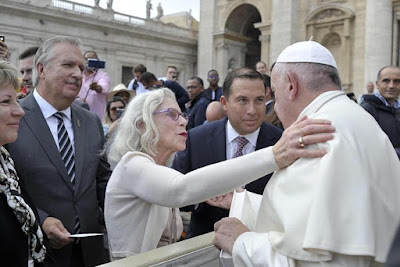 HISTORY IS MADE TODAY! ✨

This is Sandra Gering, a dear community member and student who seven years ago gave @davidghiyam, her Kabbalah teacher, a donation to translate the Tikunei haZohar into English. She said that her dream was that when it was finished she would donate the Tikunei haZohar to all major museums in the world and hand deliver it to the Pope, himself. The first volume of Tikunei haZohar set was published this past month.

Today, on the New Moon it Scorpio, which according to the Zohar is the most powerful day of the year, Sandra personally gifted the Pope the first English translation of the Tikunei Zohar published by The Kabbalah Centre! ♥️✨ 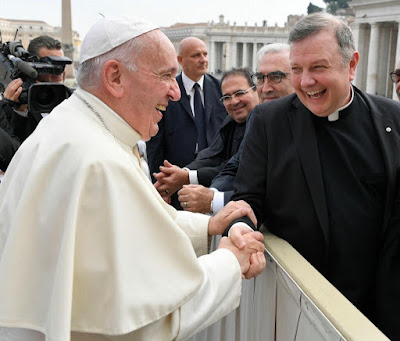 Monsignor Kiernan Harrington, Vicar of Communications for the Diocese of Brooklyn, introduces Francis to External Affairs Director, Vincent LeVien, and Sandra Gering, who gave Francis a copy of the first English translation of Tikkunei Zohar. 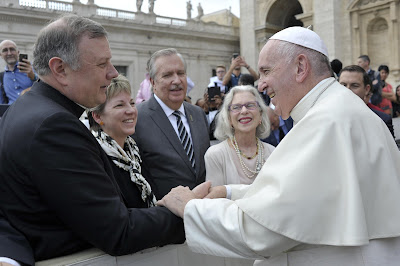 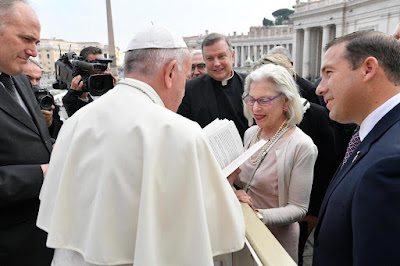 The Tikkunei Zohar is the type of book Francis loves to read.

Instagram, Zohar Project, 30 October 2019The Zohar in the hands of Pope Francis from earlier today.

This is Sandra, a dedicated student of the Kabbalah Centre, who sponsored the translation and printing of the Tikkunei Zohar in English for the first time in history! (Available soon in our bookstores)

Thank you @sandrageringinc for your tireless efforts and desire to be a beacon of Light. Your support of bringing the Tikkunei Zohar to the world - and to the Vatican - is nothing short of a miracle✨✨✨ 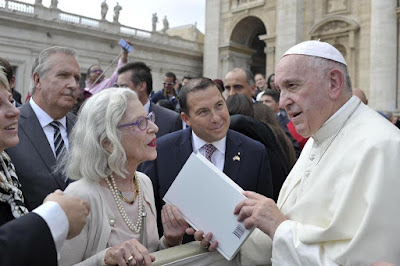 Francis likely read the entire book in under a week. 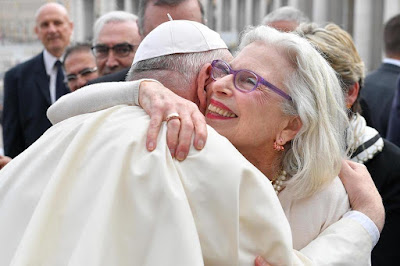 Francis gives a huge spiritual hug for such a fantastic rabbinical gift.


‘The Repair of the Zohar’

The Pave the Way Foundation has presented a replica of the Tikkunei Zohar to the Vatican Library. On hand for the special ceremony on November 4, 2019, were Gary L. Krupp, the organization’s founder and president, and board member Vincent D. LeVien, as well as the replica’s creator, artist Sandra Gering. The Tikkunei Zohar was written in Aramaic and loosely translates as “the repair of the Zohar,” with the Zohar itself translating as “splendor” or “radiance.” concerning the mystical aspects of the Torah and provides the basis for the study of the Kabbalah. Ms. Gering describes the text as “70 corrections to soul must journey through life to reach the highest level of love and unity with all mankind.” Her replica prints the words of the Tikkunei Zohar on silver paper bound into a book, which she considers to be a manifestation of the sacred text. Bringing such an object to the Vatican, where it will remain close to the gap between religions and conflicts through cultural, technological and intellectual exchanges. 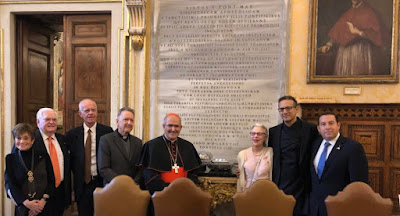 The Pave the Way Foundation presents Vatican with special Replica of Tikkunei Zohar. 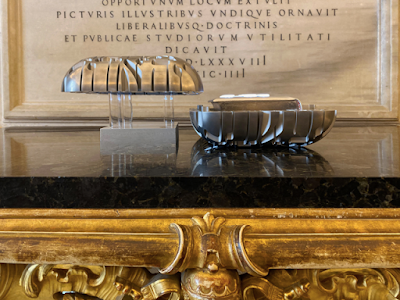 Soon to be added to the Vatican Library.

Last summer, after more than 25 years in operation, the venerable gallerist closed her brick-and-mortar space. But unlike other gallery closings, the decision wasn’t motivated by finances (the gallery was doing as well as it ever had) or real estate, nor was Gering retiring per se (she still works, though not as much as she once did). Instead, she wanted to refocus her time on other, more spiritual aspects of her life.

Today, at age 75, she is as active as ever. A practitioner of yoga for more than 50 years, she stands on her head “every single morning, no matter what.” In 2013, she appeared in Jay-Z’s “Picasso Baby” music video, dancing with the energy of a young child while an impressive mishmash of art world cognoscenti looked on.

And now she’s in the throes of what, for her, is her most important undertaking yet: a special edition of the Tikunei haZohar—a 4,000-year-old kabbalist text, written in Aramaic, about the 70 corrections that a soul must make before they reach nirvana.

What’s more, she tapped some of her closest artist friends to help out. The manuscript will be encased by two interlocking tablets created by artist and designer Ghiora Aharoni. Underneath the text will be a drawing done by Ryan McGinness. And Leo Villareal, one of the many major artists Gering helped lift to fame, created the cover, a tree of light illuminated by 70 small LEDs—one for each correction.

The book, set to be produced within the next year, will be an edition of four and is dedicated to women around the world. One has already been accepted into the collection at the Morgan Library and Museum in Manhattan. Gering hopes to place the other three with the Louvre Abu Dhabi, the Ethnological Museum at the Vatican, and the Israel Museum in Jerusalem.

“I want it to be about plurality of religion,” she explains. “And that we’re all the same soul and that we all need to reach this particular point, and do the work that we are supposed to do on this earth.”

Gering, who was raised Jewish but never identified with the ritualistic side of the religion, has long identified as a spiritual person. She realized it at an early age.

“When I was three, I had a dream that I had to bring all peoples together,” she says. “I was on a beach alone, and from that time on, I was I felt that I was connected to some universal force. Throughout my life, I’ve always listened and done what my heart tells me to do.”

That’s what makes the Tikunei haZohar project—a first-class artist’s book, essentially—so special. It perfectly symbolizes Gering’s achievements in the two most important facets of her life: art and spiritualism...”

Why Sandra Gering Closed Her Gallery to Take On an Even More Ambitious Project: Reaching Nirvana, ArtNet News, 18 July 2018 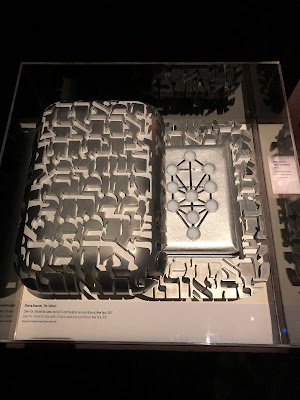 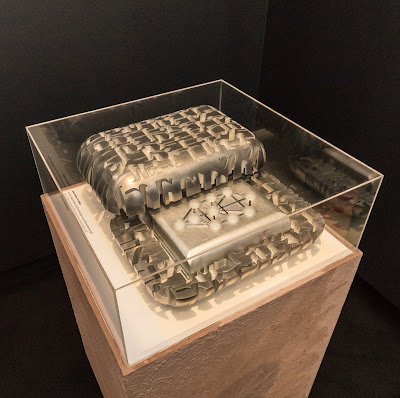 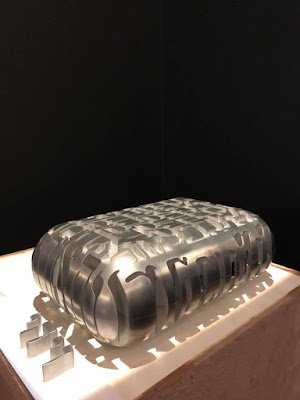 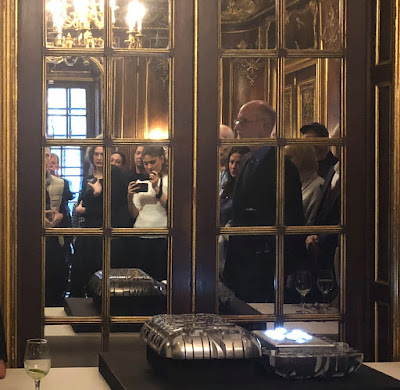 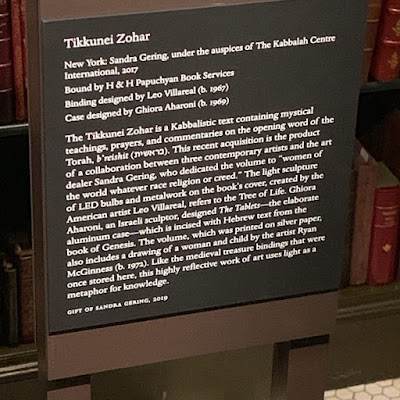 The Tablets reconceives the traditional idea of the reliquary as contemporary sculpture, a commission to house a hard-bound edition of the Tikkunei Zohar (an appendix to the Zohar, the writings central to the Kabblah). The sculpture’s form draws from the intricate, allegorical essence of the ancient, sacred book of spiritual corrections within, and employs one of Aharoni’s signature constructs—the use of text as a medium—to translate the spiritual import of book’s writings into the visual narrative of an artwork.

The form of The Tablets evokes ancient Cuneiform tablets or the original tablets brought down from Mount Sinai by Moses, and its letters—sculpted aluminum extending from the front through to the back and curving with its rounded form—manifest a fluid, transcendent energy that collapses the distance between the ancient and the contemporary into an intersection of spirituality and artistic expression.

The exterior structure of the work is formed from Hebrew text taken from the beginning of the Book of Genesis. The raised letter, which seem to be separated by voids, might be read as an allegory of humanity’s topography of corrections. However, the sculpture’s typography of conjoined letters creates an interconnected entity of text circumscribed by one continuous, flowing space—creating a parallel contemplation between what exists and what is absent in both the metaphysical and the material.

The Tablets begins with the Hebrew word “b’reishit”—both the first word of Genesis and the subject of the 70 commentaries within the Tikkunei Zohar. B’reishit also begins with the Hebrew letter “bet,” which has a numerical value of two—an allusion of a state of dualities, be it the twin forms of The Tablets that are perceived as one, or a parallel realm where dichotomies have the potential to be unified. 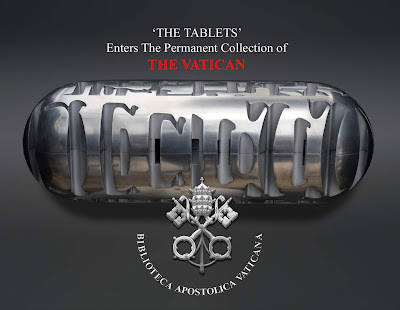 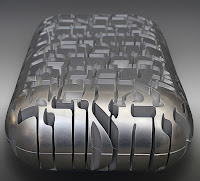 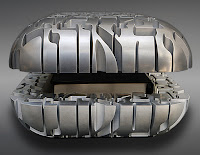 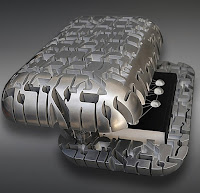 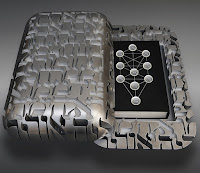 What is the Tikkunei haZohar?

The Tikkunei haZohar is an appendix to the Zohar that originally planned to have 70 sections emulating the 70 aspects of Torah by expounding on the ‘Bereshit’ of Genesis. This work digresses all over the place and gets into many topics not in the Zohar.  On top of that, it is poorly written but one thing it is, is vast. The overall theme of the Tikunei haZohar is to fix and give aid to the ‘Shekhinah’.  Tikkunei haZohar explains that ‘the redemption’ will only occur through study of Torah (Talmud) and study of the Kabbalah.  The Tikkunei haZohar sees the Kol Nidrei as fundamental to the survival of Talmudic Jews because Talmudic Jews are seeking to annul the vows that God made in his anger to destroy the Talmudists for their failures. In annulling human vows, the Talmudists hope that God’s divine vows will also be annulled. As below, so above.  The book laughably purports in its text to have been written by Rabbi Shimon bar Yochai and his son Rabbi Elazar in the 2nd century but was likely written in Italy in the 16th century. Its wikipedia entry reads, “Rabbi Nachman of Breslov was involved with Tikunei haZohar more than with any other book, and he stated that Tikunei haZohar is of such different holiness and wisdom that it is beyond compare to the rest of the holy Zohar.[3] He also said that, "Concerning the book Tikunei haZohar, one thousand books would not suffice to explain the secrets that are to be found there."[4]”  To call it insane, is to be too kind. 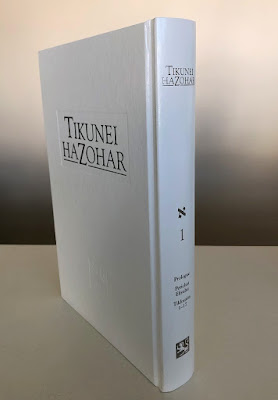 The Tikkunei Zohar which Sandra Gering presented to Francis during his weekly general audience.

During his lifetime, Rav Brandwein continued to write the commentary on the Zohar after the death of his teacher, Rav Yehuda Ashlag, and also began to write a commentary on the Tikunei haZohar entitled Ma’alot haSulam (“Ascents [rungs] of the Ladder”).

For the first time, Kabbalah Centre Publishing has the merit to publish an English translation of Rav Brandwein’s translation and commentary on the Tikunei haZohar for those whose hearts yearn to taste of the Tree of Life of Rav Shimon bar Yochai. Tikunei haZohar Volume 1 is the first in this series of commentaries.

Tikunei haZohar contains seventy different interpretations (tikkunim) by Rav Shimon bar Yochai of the Hebrew word beresheet, the first word of the Torah. Rav Shimon had fled the government that had issued an edict to kill him. While he and his son Rav Elazar hid in a cave in Peki’in for thirteen years, they were taught the entire Tikunei haZohar from Elijah the Prophet and Moses. There were no other disciples present, except these two, which is why there are no conversations among the disciples in the Tikunei haZohar like there are in the Book of Zohar and in Zohar Chadash. It is known that the Tikunei haZohar will help to hasten the coming of the Messiah and is related to, and was put aside, until the Messianic era.


This is another rabbinical book which Francis was more than happy to receive because its main theme is one he is in total agreement with. The Tikkunei haZohar is about fixing God’s mistakes in the world in order to hasten the coming of the ‘moshiach’ by nullifying God’s word.  Francis and his reign has been all about correcting God’s mistakes in his Church and the world while invalidating the word of God. It’s a match made in hell.

Posted by hereisjorgebergoglio at 2:20 PM