Who was Evo Morales’ partner in crime as he sold out the people of Bolivia to the Chinese Communist Party?

China and Morales destroyed Bolivia. It’s not a coup when people #resist

China and Bolivia. In the beginning…

In 2006, Prior to assuming the Bolivian presidency, Evo Morales traveled to the Peoples Republic of China where he publicly declared himself to be a great admirer of Chinese revolutionary leader Mao Zedong.

In the early years of Morales’s presidency, China made loans to the Bolivian state for the direct purchase of strategic products like military aircraft and weapons.

Some purchases were notorious, such as a set of drilling rigs sold by CAMC Engineering to YPFB (a Bolivian State owned energy company) that proved to be defective, and barges commissioned from a Chinese shipbuilder that have yet to be delivered.

In 2014, China overtook Brazil as Bolivia’s principal source of imports, supplying half the country’s clothing imports as well as cars, motorcycles, cell phones, computers, and other domestic electronics that feed the growing consumerism of Bolivia’s burgeoning middle class. The cost of these value-added Chinese products significantly exceeds what China pays Bolivia for Bolivia’s commodity exports, resulting in a 2016 bilateral trade deficit of $4 billion for Bolivia.

By 2017, the Bolivian government owed more than $700 million to Chinese banks (Export-Import Bank of China and Chinese Development Bank), constituting 9.2% of the country’s total foreign debt.

China has pledged a new $10 billion line of credit for strategic government projects.

This doubles Bolivia’s foreign debt and China will be Bolivia’s largest creditor.

All projects financed by Chinese loans must be awarded to Chinese companies, which come with their own materials, equipment, and technology, and often their own labor.

It is asymmetrical, The logic is not to develop Bolivia’s productive capacity, but to provide outlets for expansion of Chinese capital, generating profits for Chinese companies through energy and infrastructure development as a pathway to more lucrative extractive ventures and a permanent Chinese foothold in the region.

These megafirms have become the largest government contractors in Bolivia, winning awards for major public investment projects on a “sole source” basis, or through invitation-only solicitations to a limited number Chinese firms.

In transportation and energy, Chinese companies like Sinohydro, CAMC Engineering, Sinopec, and China Railway are engaged in the construction of multiple government projects, many of which have been plagued by labor, environmental, and feasibility problems. After repeated protests by workers over exploitative conditions, retaliatory treatment, and disproportionate hiring of Chinese nationals, the Chinese Foreign Minister Wang Yi pledged that China would comply with Bolivia’s labor norms. Morales government has inadequately enforced this commitment.

In the manufacturing sector, Chinese companies have built industrial facilities for the state that, to date, have made limited contributions to the national economy. A paper mill inaugurated three years ago by Shenzhen Vicstar has yet to turn a profit. A sugar refinery is barely operational due to faulty planning around sugar harvests and infrastructure.

In mining, Chinese companies began by building zinc refineries and a tin processing facility for Morales, but are now positioned to play a more significant role. Sinosteel was recently awarded a $450 million contract to develop the El Mutún steel processing plant. This is the first phase of a multi-stage undertaking aimed at catapulting Bolivia into the global steel market, which could provide significant investment opportunities for China.

Lithium reserves. Chinese companies, under contract to the state, have developed a small lithium extraction facility, a pilot lithium battery plant, and a potassium salt refinery in the Uyuni salt flats, all with Bolivian funds. In September 2016, China received Bolivia’s first lithium export: 15 tons of lithium carbonate, delivered at a substantially below-market price. Elsewhere, projects like Mutún and lithium extraction in Uyuni pose major ecological challenges—which Chinese firms, with their global track record of environmental abuse, and the Morales government, with its criminally lax enforcement will not resolve.

Meanwhile, the transnational China Natural Resources is moving forward with plans to develop and operate its own copper smelting plant in Uyuni. which has also acquired mining interests in Madidi National Park, gateway to the Bolivian Amazon, where it has been carrying out operations without an environmental license.

Bolivia’s hydrocarbons sector has been almost entirely handed its projects and management to Sinopec, already well-established in Bolivia through its road construction projects, and BGP, a subsidiary of China National Petroleum Company, to undertake exploratory activities in the Bolivian Amazon, on protected national reserves which are also indigenous territories.

Also hard hit are domestic construction companies, which can’t compete with Chinese megafirms and are precluded from bidding on Chinese-financed projects in any case. Many Chinese companies end up subcontracting with local operators, such as truckers, through exploitative arrangements that lead to community conflicts.

Indigenous small and medium sized domestic producers are being squeezed out by cheap Chinese imports.

Over the past 5 years, Bolivian imports of Chinese furniture have cut domestic production in half, adversely affecting some 50,000 Bolivian carpenters. Six textile firms have recently shut down, along with Enatex, the state textile company.

Even the fabric to make the ruling MAS (Movement Towards Socialism) party’s banners and whipalas, the indigenous flag, is imported from China.

Chinese-built and financed megaworks, with their attendant deforestation, soil degradation, and ecological disruption, are imposing significant environmental costs on communities and regions already suffering the effects of climate change. Hardest hit are indigenous peoples, whose homes and livelihoods are directly threatened, especially in the Amazon region where so many infrastructure projects are located. .

China’s $10 billion credit pledge increases Bolivia’s foreign debt to more than 50% of GDP a likely insurmountable hurdle at a time when commodity prices and export revenues are falling. Bolivia is mortgaging its long-term future for domestic infrastructure, not for production which contributes to economic expansion.

China’s presence in Bolivia has helped to foreclose opportunities for alternative development grounded in local and regionally-based sustainable production that could point towards resolution of the country’s deep-seated economic, social, and political conflicts.

And, that’s why the protests. #NotACoup

What was the straw which broke the proverbial camel’s back and united both the far-right and extreme-left against Morales in Bolivia? Simply, it was Morales burning down 5.2 million acres of the Amazonian rainforest in his bid to make more land for cattle to graze in order to meet the insatiable demand China has for beef. 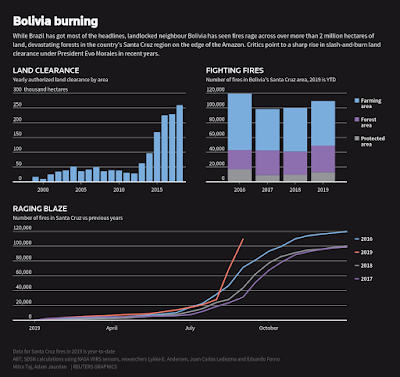 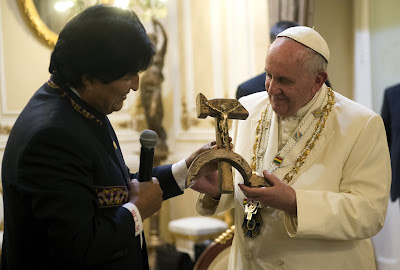 If Christians do not understand by now that Francis has the worst intentions in mind spiritually and physically for them, then only God can help them.
Posted by hereisjorgebergoglio at 8:50 PM