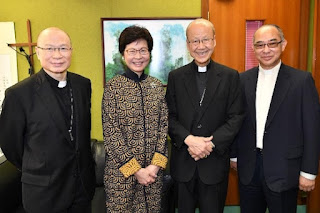 Carrie Lam is a product of the Second Vatican Council.

“From day one, I have said this opportunity is given by God. Because if you analyse it rationally, you may not want to do this job – there are a lot of difficulties, sacrifices that may need to be made. But as God called upon me – to say that I am needed to continue serving Hong Kong society at this moment – I made my response.”

“I’ve said in public that regardless of their political affiliations, as long as that individual has the ability and is willing to serve, and his philosophy is aligned with mine, then I would be more than happy to invite him or her to join the politically appointed team.” 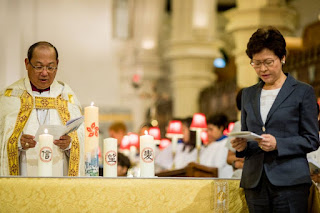 The CCP appointed the Novus Ordite, Carrie Lam, as the Chief Executive of Hong Kong.

“Working in the SAR government [Hong Kong Special Administrative Region of the People's Republic of China], when you insist on doing the work of righteousness, you’ll often be given a hard time.”


“Some said that the eighth blessing applies very well to me – it says, ‘blessed are those who are persecuted for righteousness sake: for theirs is the kingdom of heaven’ – there is already a place reserved for me in heaven.”


Chief Sec. Carrie Lam says there is a place reserved for her in heaven, Hong Kong Free Press, 2 November 2015 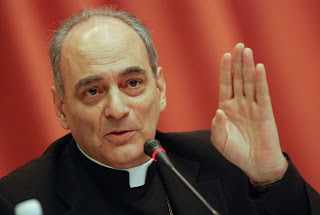 How does one become a bishop when he espouses something which is anti-Catholic?

“Right now, those who are best implementing the social doctrine of the Church are the Chinese,” a senior Vatican official has said.


Bishop Marcelo Sánchez Sorondo, chancellor of the Pontifical Academy of Social Sciences, praised the Communist state as “extraordinary”, saying: “You do not have shantytowns, you do not have drugs, young people do not take drugs”. Instead, there is a “positive national conscience”.


The bishop told the Spanish-language edition of Vatican Insider that in China “the economy does not dominate politics, as happens in the United States, something Americans themselves would say.”


Bishop Sánchez Sorondo said that China was implementing Pope Francis’s encyclical Laudato Si’ better than many other countries and praised it for defending Paris Climate Accord. “In that, it is assuming a moral leadership that others have abandoned”, he added.


As part of the diplomacy efforts, Bishop Sánchez Sorondo visited the country. “What I found was an extraordinary China,” he said. “What people don’t realise is that the central value in China is work, work, work. There’s no other way, fundamentally it is like St Paul said: he who doesn’t work, doesn’t eat.” 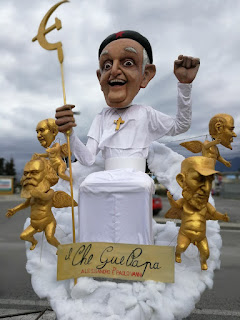 Francis, “The Marxist ideology is wrong. But I have met many Marxists in my life who are good people, so I don’t feel offended.”  Is Francis then a Maoist?

“I would like to go to Beijing, I love China.”

The fruits of the Vatican’s pro-communist China stance.

Posted by hereisjorgebergoglio at 2:40 PM