Season’s Greetings from the Talmudic Tribe

Christ hate and hatred of Christians shines forth bright


or click here to watch the film, ‘Dreaming of a Jewish Christmas’

"Song is the most powerful weapon there is"

Speaking before an audience at the 92nd St. Young Men's and Young Women's Hebrew Association in NYC, lyricist of the song "Somewhere Over the Rainbow," "Yip" Harburg spoke of musical weaponry:

"...song is the most powerful weapon there is ... Songs have been the not-so-secret weapon behind every fight for freedom, every struggle against injustice and bigotry. Give me the makers of the songs of a nation and I care not who makes its laws ... A song can degrade your culture; debase your language ..."

"Yip" Harburg speaking of the tribe he waged musical warfare with:


Our tribe of songsmiths always wrote for our peers. We were very much ashamed of ourselves if we wrote something clichéd, if we took an idea from another person. By “our tribe,” I’m talking about Cole Porter, Ira Gershwin, Hart, Dietz, all those people who got together every week, usually at George Gershwin’s house, and we could more or less compare the things we were working on.

Philip Roth “said that he called [Irving] Berlin a genius, having de-Christed the major Christian holidays, Christmas and Easter, with his two songs ‘White Christmas’ and ‘Easter Parade.’ They had nothing about Jesus… Roth also called ‘White Christmas’ ‘schlockified Christianity.’” 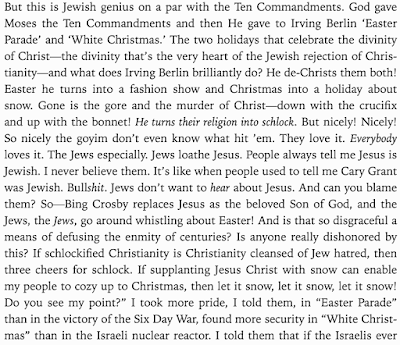 Thank you to 737MAX who sent us this information.

Posted by hereisjorgebergoglio at 9:45 AM