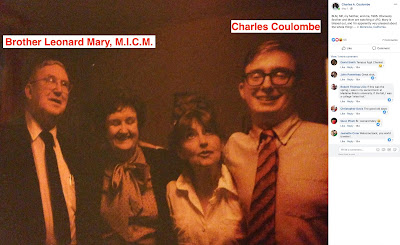 Few know that Roy-Charles Coulombe is an unabashed Feeneyite, and even fewer know that he is in fact a Feeneyite brother, and almost no ones seems to know or even care that a theosophist gnostic freemasonic bishop signed the incorporation papers (and still serves as an executive) of the branch of Feeneyism on the West Coast which Charles Coulombe co-founded!
The names “Br. Charles Columban”, “Charles Columban”, and “Brother Roy” show up over the years. Below are items which can easily be found by using simple search engines on the internet.
A few photos Coulombe posted of J. Fred Farrell on facebook, two of which have himself in them. Note that Fred J. Farrell wears a coat and tie even though he is a Feeneyite brother... remind you of someone? In two years from the date these photos were taken, Fred J. Farrell, Roy-Charles A. Coulombe, and Stephan A. Hoeller will sign founding documents of the Saint Benedict Center - West.
Defenders of Charles Coulombe laughably claim that this was done as a favor because J. Fred Farrell didn’t know anyone who could help him form a nonprofit company. Did J. Fred Farrell (aka Br. Leonard Mary) not know how to look up a lawyer in the Yellow Pages phone book and dial a phone? Did J. Fred Farrell not meet any Catholics after living in California for eight years who could help him form a nonprofit? Did Charles Coulombe (aka Br. Charles Columban) think it a good idea to have a gnostic bishop sign the incorporation papers of a ‘catholic’ non-profit? And why is this same gnostic bishop still serving as secretary (a very important position) of the same non-profit as we type? 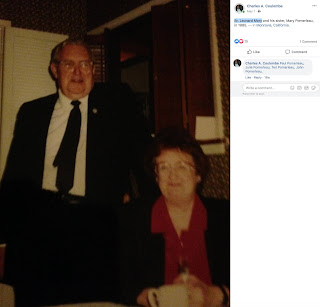 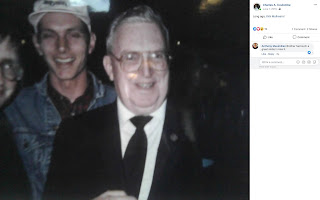 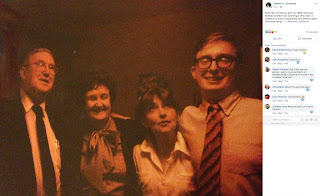 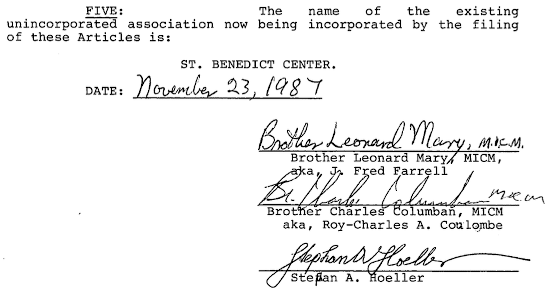 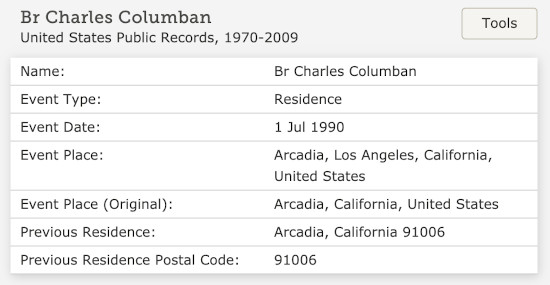 “The case of Charles Coulombe represents a good example of this younger, pro-Feeney crowd. Coulombe, a movie critic and columnist for the National Catholic Register, is a Generation-Xer who also runs the "Charlemagne Press" out of Arcadia, California. According to both Br. Bartholomew of the St. Benedict Abbey in Still River, Massachusetts and Br. Andre of the St. Benedict Center in Richmond, New Hampshire, Coulombe's involvement with Feeneyism is extensive. According to Br. Andre, Coulombe is one of three religious brothers of "St. Benedict Center West," (also known as the "St. Joseph House of Studies") the first outpost of Feeneyism on the West Coast. The superior of the community, Br. Leonard Mary, (aka J. Fred Farrell, Jr.), is the publisher and author of the foreword to Desire and Deception, the same pro-Feeney book Gerry Matatics was circulating on his lecture tour. The links here are not coincidental. Both Br. Bartholomew and Br. Andre independently asserted that Coulombe himself is the author of Desire and Deception, and that "Thomas A. Hutchinson" is merely a pen name.”

A pro-Feeney tract written by Coulombe using a pseudonym. Charles Coulombe would deny for fifteen years that he was Thomas Hutchinson until the second edition of the book was published. This is interesting because Coulombe attacks people for hiding behind pseudonyms. 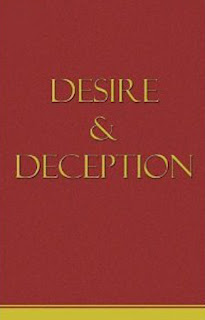 Desire and Deception: Is the Church Necessary? by Thomas A. Hutchinson (1994)

“My debt of gratitude goes back to the Feeneyites...Br. Charles Coulombe in Monrovia, CA (never came under censure, but his superior Br. Leonard Mary was reconciled with Fr. Feeney)” 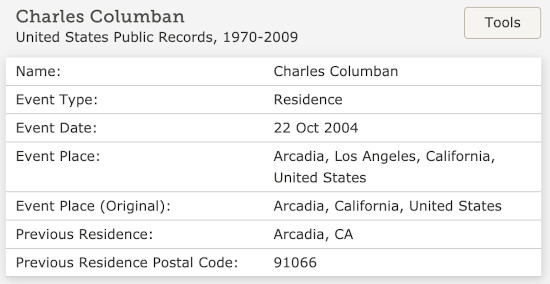 “I can never repay the debt I owe to the various Slaves of the Immaculate Heart of Mary – especially...to Brother Charles Coulombe and company from “St. Benedict Center West” in California.”

Banned Near Boston: Why You Won't Be Seeing Me at the St. Benedict Center Conference - Gerry Matatics, Biblical Foudations International, 26 July 2006. (bold is ours)

Criswell the Psychic is best know for his work in Ed Wood's Plan Nine from Outer Space and his very own predictions to the general public was not quite absent at his 100 year celebration at the Piano Bar in Hollywood. He used to say," The future is where we will spend the rest of our lives!"
It was a formal affair, very gay but not in a sexual way, but in the 1930's terms. Brother Charles Coulumbe, writer, and creator of this festival of future events coined the phrase that we are forever more known as the Criswelians.
Reverence for a man's motto 'we don't think we know". Happy Birthday to Scot from Dearly Beloved toured, heck out his site at www.findadeath.com attended with friends Alex and Sue, Dr Stephen Holler the Bishop of the Gnostic church, Ed Canfield, Audio Visual expert and his crew, We had Eddie Canter music loads special guests, and Good Booze I mean we emptied the top shelf and they were out of beer the next day. I was in charge of securing the location and asking Alex to make the yummy Swedish meatball appetizers and vegetable dips. That night, 30 of us in gowns and tuxes wet down the street singing on a pilgrimage to Criswell's old home known as Disgrace land by my peers. There, Brother Roy and his evil twin told real life ghost stories, only they were true! Brother Roy lived there with his family in the 60's! 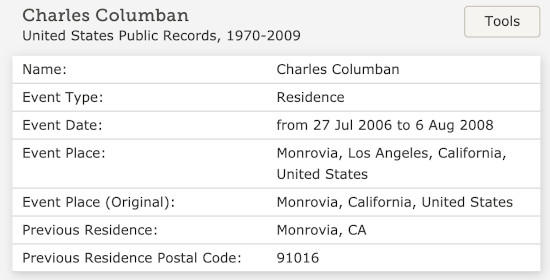 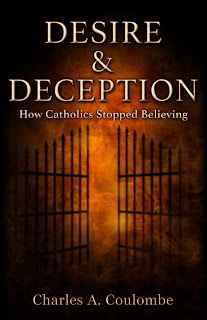 Desire & Deception: How Catholics Stopped Believing by Charles A. Coulombe (2009)

Mary F. Craft, The Boston Globe, published from from Apr. 22 to Apr. 23, 2015.
Charles Coulombe was still referring to himself as “Br. Charles Columban” on 20 October 2019 in this entry at an online guestbook for Gary Neal Crouch. Notice he posted his location as “Trumau, Austria”. According to the amazon blurb for recently published book by Charles, he “is currently studying Theology at the International Theological Institute in Trumau, Austria.” 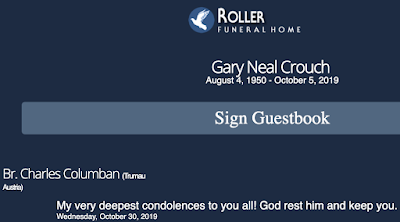 Snapshot from a defunct twitter account, mentions a Br. Thomas living with Coulombe. According to the Br. Andre, “Coulombe is one of three religious brothers of "St. Benedict Center West," (also known as the "St. Joseph House of Studies") the first outpost of Feeneyism on the West Coast.” If we were to count the late Br. Leonard Mary, that would make three. 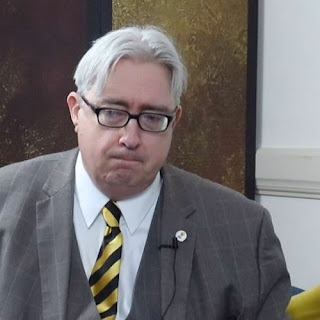 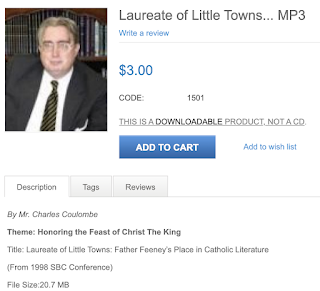 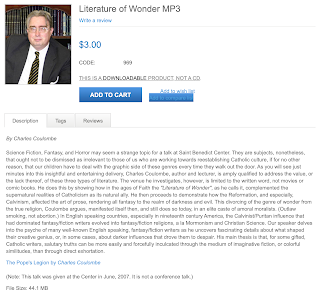 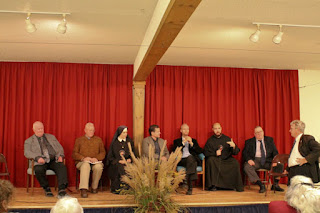 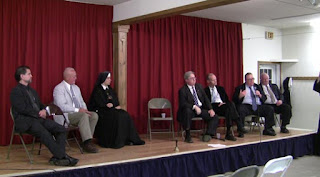 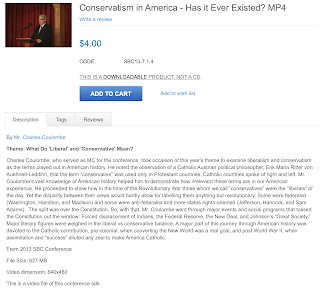 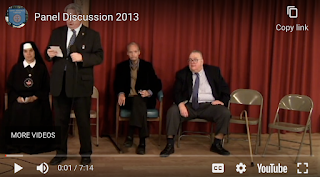 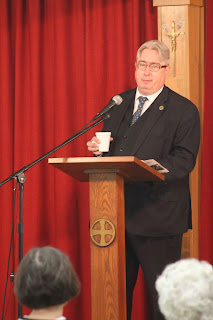 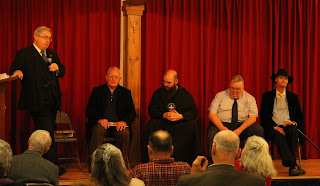 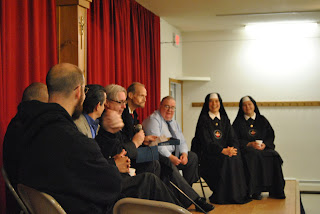 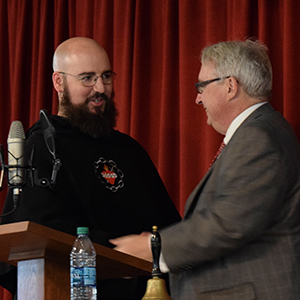 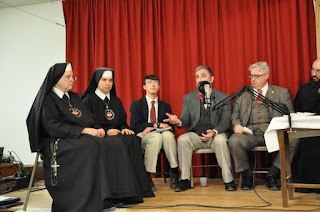 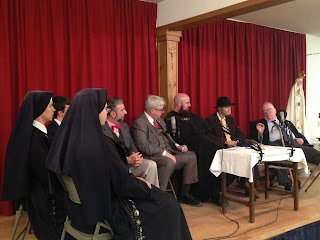 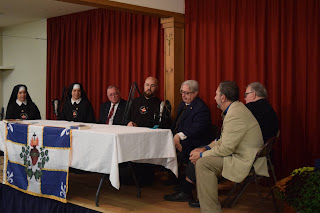 Posted by hereisjorgebergoglio at 7:28 PM