Francis believes that scandalous perversion (sin that cries to Heaven for vengeance) has the right to a ‘family’ which will then pass on their deprived sexual mores and values.


It’s not like this a surprise to anyone with half a brain who paid attention to him. 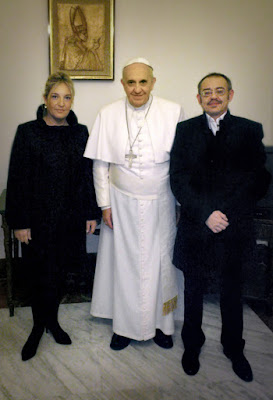 Two women with Francis at the Vatican on 24 January 2015.  The one with a mustache is named Neria Lejárraga but refers to herself as ‘Diego’ after undergoing surgery and male hormone treatments. The two women were engaged to each other when meeting with Francis and have since been married in a civil union.

Posted by hereisjorgebergoglio at 5:09 PM