Considering that Charles Coulombe: practices tarot card divinization at a theosophical lodge; attends Halloween parties sponsored by the Gnostic Society; likes The Gnostic Society of Los Angeles on social media; enjoys occult movies; channels the Amazing Criswell who he is also obsessed with; rubs shoulders with gnostics socially and gives them lectures on everything but Catholicism; all the while he is a Feeneyite religious brother who has a gnostic bishop serve on the board of the nonprofit corporation he co-founded for his religious order, we should look at Coulombe’s every move with suspicion.

Charles Coulombe wrote a book, Haunted Places in America: A Guide to Spooked and Spooky Public Places in the United States. There are several peculiar items in it such as: the first quote in the book is from a Catholic occultist and the second from an Anglican priest; Coulombe feels “privileged” to go on a “ghost hunt” with psychics and parapsychologists where he uses “divining rods” and to boot he brings along his nephew — Guy; that those who go to haunted places and come away encountering something strange are one of the “lucky” ones; and Coulombe believes that hauntings are caused by souls, demons, or another race of beings. What really sticks out is the dates on which Coulombe wrote the Introduction and the Afterword and how he chose to write them. 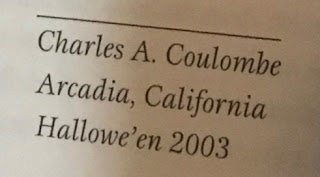 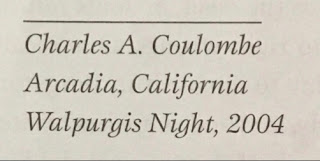 In The Satanic Bible by Anton Szandor LaVey (born Howard Stanton Levey) in the section Religious Holidays writes, “After one’s own birthday, the two major Satanic holidays are Walpurgisnacht and Halloween (or All Hallows’ Eve).”

Considering that the Introduction and the Afterword are dated on two of the three major Satanic holidays and the only photo Charles Coulombe has posted of himself celebrating his birthday just happens to be at the [Annie] Besant Lodge, plus his history with the occult and gnostics, we have to conclude that something isn’t right with Coulombe spiritually or morally.  How much longer can Coulombe use excuses such as: it was only a coincidence; I was taken out of context; they are haters; or equivocate it away before Catholics wake up?

Birthday in the Lodge 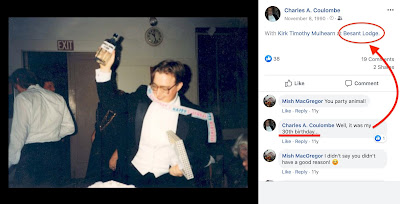 Posted by hereisjorgebergoglio at 1:30 PM