One photo of Francis says it all 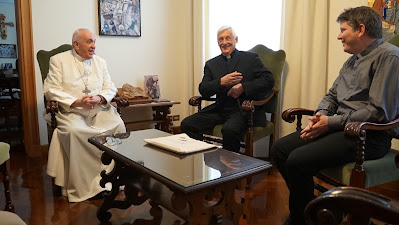 Three Jesuits: Francis, and Arturo Sosa (the Superior General of the Jesuits), and Pascal Calu (a Belgian Jesuit at the General Curia in Rome) tell jokes on 3 May 2021.
A photo of Francis in meeting room on the floor he uses as his apartment in Casa Santa Marta hotel says all you need to know about him. See his favorite blasphemous painting behind him which reads, “May his name and memory be blotted out” on the placard above the crucified Jesus.
In the book, El Jesuita: Conversaciones con el cardinal Jorge Bergoglio, Francis states, “The White Crucifixion, Chagall, who was a Jewish believer, is not cruel (but) it is hopeful. Pain is shown there calmly. I believe that it is one of the most beautiful things he painted.”  Blasphemy in Francis’ eyes is beauty and ‘blotting out the name and memory’ of Jesus the Christ gives him hope. This should come as no surprise as Francis is a traditionalist, albeit a rabbinical one. 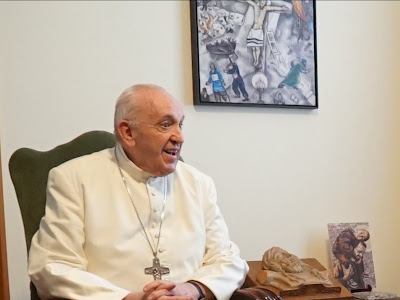 Close up view of Francis and Chagall’s blasphemous painting.

The Talmudic acronym YESHU for Jesus Christ which means “may his name and his memory be blotted out.” 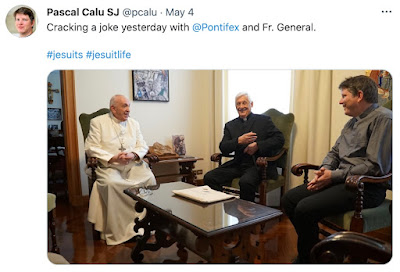 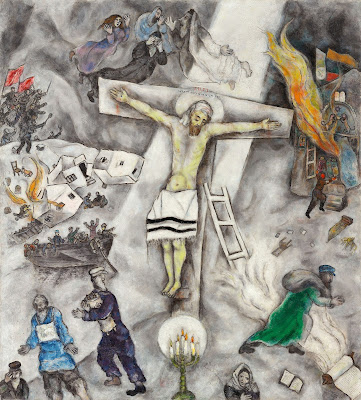 Posted by hereisjorgebergoglio at 2:05 PM