Yes, he really wrote that.

It’s not something so important that it invalidates, Infiltration: The Plot to Destroy the Church from Within, but it demonstrates once again, the sloppiness and the lack of research in Marshall’s own words of, “The greatest literary accomplishment of my life”.

So where does this tall tale originate from? None other than the flim-flam philanderer, Malachi Martin. It comes from his book, The Keys of This Blood: The Struggle for World Domination Between Pope John Paul II, Mikhail Gorbachev & The Capitalist West, published in 1990.  On pages 535 & 536 one reads this lie along with a slew of others.

This should come as no surprise as Martin was known for his gift of blarney and tailored his lies to his audience claiming: John XXIII wrote the Christians’ blood-libel & Jews are God prayer; Roman soldiers sodomized Our Lord before crucifying Him; God acts through Kabbalists; that he served as John XXIII’s emissary to Mao Tse-Tung; that a “superforce” surrounded John Paul II and tied his hands; that he was the confessor for John XXIII; God could have incardinated as a cow; Gematria is good when used properly by the rabbis; that two of the Catholic Church’s deficiencies are lack of women and a theology of love; that he was consecrated by Pius XII as a secret bishop; that an integral part of Catholicism is antisemitism; etc... Martin was a master at sowing confusion and misdirection with his juicy tales.

This legend was popularized and spread around the world so much by Martin’s readers, that in 2013 a meeting took place in Opole, Poland on the occasion of the 110th anniversary of Sarto's election as pope and the centenary of his death, which “wanted to prove that there were two popes of Polish origin in history”. This meeting concluded however, “without a shadow of a doubt... Pius X's family came from Italy” and  “the hypotheses about Pius X’s Silesian origin should finally be rejected.”

Returning to Taylor Marshall and his copy-and-paste book, Infiltration, imagine if he had used a search engine and asked a simple question. He would have come up with something like the following: 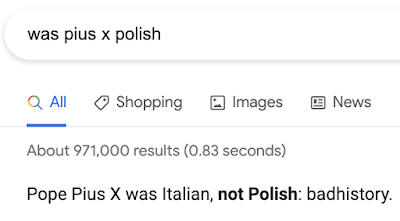 Or he would have found this excellent website on Pope St. Pius X which contains the genealogy of the Sarto family all the way back to the 15th century and his parents’ marriage certificate, both of which show what Malachi Martin and Taylor Marshall wrote to be false.

Considering his history, the fact that anyone listens to, reads, or donates money to Taylor Marshall is sad. Their time would be better spent reading the writings of saints, praying the Rosary, or attending Holy Mass.
Related Taylor Marshall:
Posted by hereisjorgebergoglio at 9:43 AM