Mr. Harry F. Guggenheim
The Harry Frank Guggenheim Foundation
120 Broadway
New York, N.Y.
November 20, 1968
Dear Mr. Guggenheim:
I am hoping that you will remember me from the two or three happy occasions on which I has the pleasure and honor of meeting you. Due to your generosity and interest, also, I have been enabled to conduct and finish successfully some worthwhile studies of dominance and aggression in religious history and development. As you probably know, I have already handed in my study of this question to Farrar, Straus, and Giroux; they have accepted my manuscript under contract, to be published in 1969.
The chief purpose of this letter is, firstly, to thank you very wholeheartedly for this assistance. Secondly, I wish to tell how of my continued and sustained interest and preoccupation with the larger issues involved in the problem of dominance both in the religious field other sectors of human activity. Particularly today, in America, it would seem essential that the causes and irritants of oppressive dominance and aggression receive not merely academic study and examination -- always necessary, of course, -- but also practical action in the socio-political theater. I am, of you will permit the remark, "hooked" on the subject as a a key concept to full understanding of the human condition today. I would be interested to take up further study of this subject, if the Foundation ever sees fit to decide of its feasibility.
With renewed thanks,
Sincerely your,
Malachi Fitzmaurice-Martin 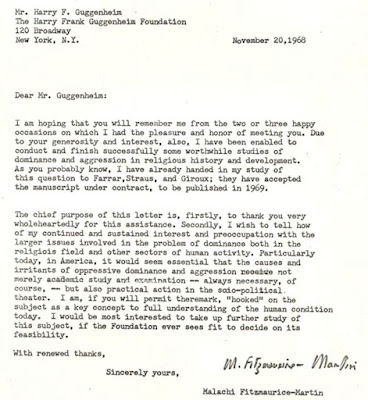 “SCHNORRER — Judæo-German term of reproach for a Jewish beggar having some pretensions to respectability. In contrast to the ordinary house-to-house beggar, whose business is known and easily recognized, the schnorrer assumes a gentlemanly appearance, disguises his purpose, gives evasive reasons for asking assistance, and is not satisfied with small favors, being indeed quite indignant when such are offered. He usually travels from city to city and even into foreign countries; but he must not be confounded with the tramp, whose counterpart is not to be found in Jewish beggary...The author who considers that the world owes him a living for his "great work" for "enlightening mankind" and who presses the acceptance of his book on the unappreciative rich in consideration of whatever sums they may be willing to contribute, is characterized as a literary schnorrer.” (Bold is ours for emphasis.)

p. 106, entry — Schnorrer, Jewish Encyclopedia, Volume 11, (1905).
Thanks to MauricePinay who pointed this out.
Never have we come across a more apt description for this snake oil peddling flim-flam man.

Posted by hereisjorgebergoglio at 2:45 PM