Jorge and the Swiss Guard 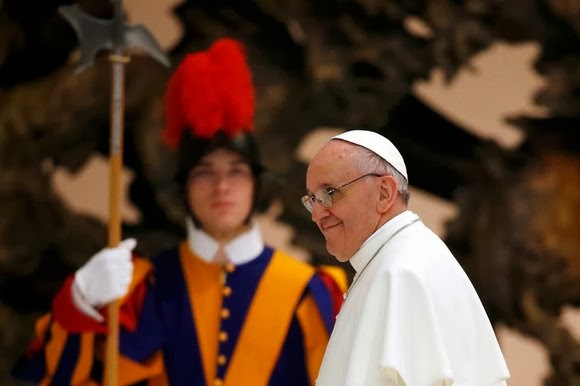 The Pontifical Swiss Guard goes back to the 15th century and Sixtus IV.  They are responsible for the safety of the Pope and the security of the Apostolic Palace.  The Swiss Guard is the de facto military of the Vatican City State.  Since Jorge has declined to live in the Papal Apartments and has chosen to live in the Domus Sanctæ Marthæ (Vatican’s hotel) they are to protect him there.  Sometime in late April 2013, Jorge left his room in the hotel and was surprised to see a Swiss Guardsman standing watch at his door.  The conversation was as follows*:


Jorge: Have you been up all night?
Guard: Yes.
Jorge: Standing? Aren’t you tired?
Guard: It is my duty, your Holiness, for your safety.

Jorge paused went back into his room and returned with a chair.


Jorge: At least sit down and rest.
Guard: No, the rules do not allow it.
Jorge: The rules?
Guard: My Captain, your Holiness.
Jorge: Well I’m the Pope, and I’m asking you to sit.

Jorge leaves but returns later with some ham and bread which he gave to the bewildered guard.

Jorge then turned and left.


Is Jorge trying to stop this Swiss guardsman from doing his duty or is he simply showing compassion for a fellow human being?  A further look at the behaviors of Francis should tip one off as to which is the case.

Posted by hereisjorgebergoglio at 11:33 AM