Suor Cristina has her Sister Act down

"Remember the devil never sleeps but seeks our
ruin in a thousand different ways."
- Saint Angela Merici -
We were going to post another entry today but this Suor Cristina story seems to have taken on a life of its own.  Some more information Call Me Jorge... has uncovered about this sister.

Cristina Scuccia was born in Comiso in the province of Ragusa.  She has dreamt of being a professional singer for a very long time.  Since she was 14 years old she cannot imagine a life without song, singing every opportunity she got.  When she was 18 years old she was cast for an Italian television show Amici and failed to make it.  Undeterred she practiced for entry on the X Factor.  In 2008 she happened upon a tryout for a musical, The Courage to Love, the Ursuline Sisters of the Holy Family were putting on dedicated to their foundress, St. Angela Merici.  The nuns offered her the role of the protagonist which she didn't want.  Her mother however insisted she take the role.

"It all started as a joke but then, playing the character, every night I realized that my life was changing. I asked questions of myself that before would have never even crossed my mind."


Leaving her job in a call center in 2009 she started down the path of a religious vocation.  First by becoming a postulate, then for two years she was a novitiate in Brazil where she worked with children.  Finally in 2012 she made her first profession.  It was at this point she enrolled at the Star Rose Academy in Rome to study singing and dancing. Interestingly. the Star Rose Academy was founded and is run by none other than the Ursuline Sisters of the Holy Family, Cristina's order.  This led to her appearance on the Good News Festival.  Along the way she was guest on an Italian talk show on the channel Rai Uno where they gave her the moniker "The Singing Nun".  Suor Cristina is by no means a stranger to television and has had much practice rehearsing her Sister Act.  Another oddity, which we only point out because she is a nun, is she auditioned for The Voice of Italy in street clothes and not her religious habit.

"I realized that mine is a beautiful message to send. Pope Francis speaks of the church as a mother. I'd like people to think that the church is everywhere, it can be with everyone. Just because we're sisters we can't perform?  Who said that?  It is a strong message about a young woman who dedicated her life to God and continues to do things like any person of my age. Mine is a message of loyalty and love that I send through my voice.  I have to share my voice with everyone."

"(My) Parents have always supported (me) in everything, singing and even in the choice of becoming a nun."

"They believe in this great project that God has for me."


Well part of her great project includes a twitter account (@SuorCristinaS) as she signed up for one just the other day. Suor Cristina has wasted no time in tweeting one of her biggest fans Cardinal Gianfranco Ravasi. 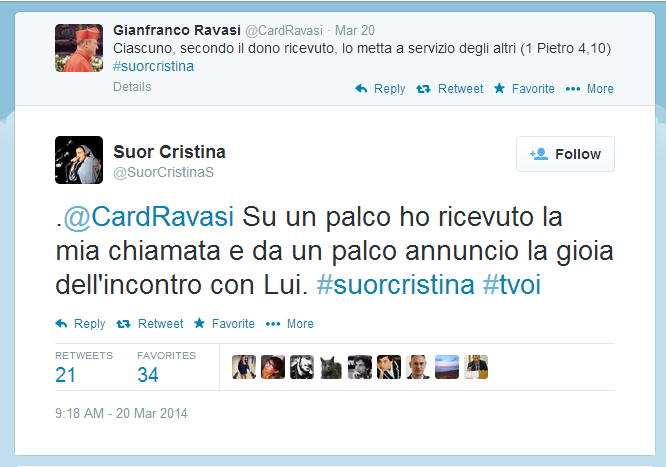 Ravasi is infamous in Novus Ordo circles for liking rock 'n roll artists such as Lou Reed and Amy Winehouse.  Another religious fan of Cristina's is Deacon Greg Kandra who wrote, "this nun is on fire."
Let us pray for Cristina Scuccia with the intention she finds the Faith and saves her soul for all eternity.


“In the fulfillment of your duties, let your
intentions be so pure that you reject
from your actions any other motive
than the glory of God and
the salvation of souls.”
- 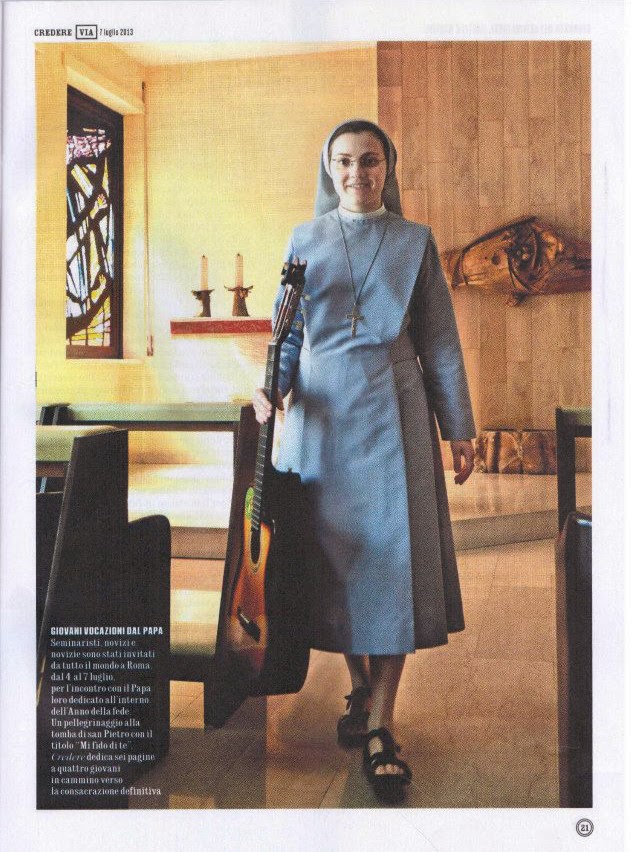 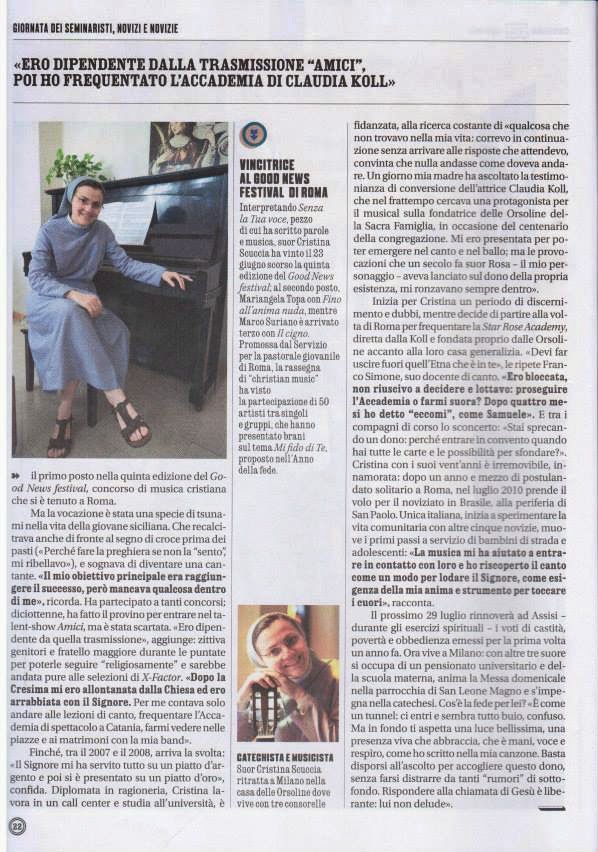 Posted by hereisjorgebergoglio at 12:39 AM