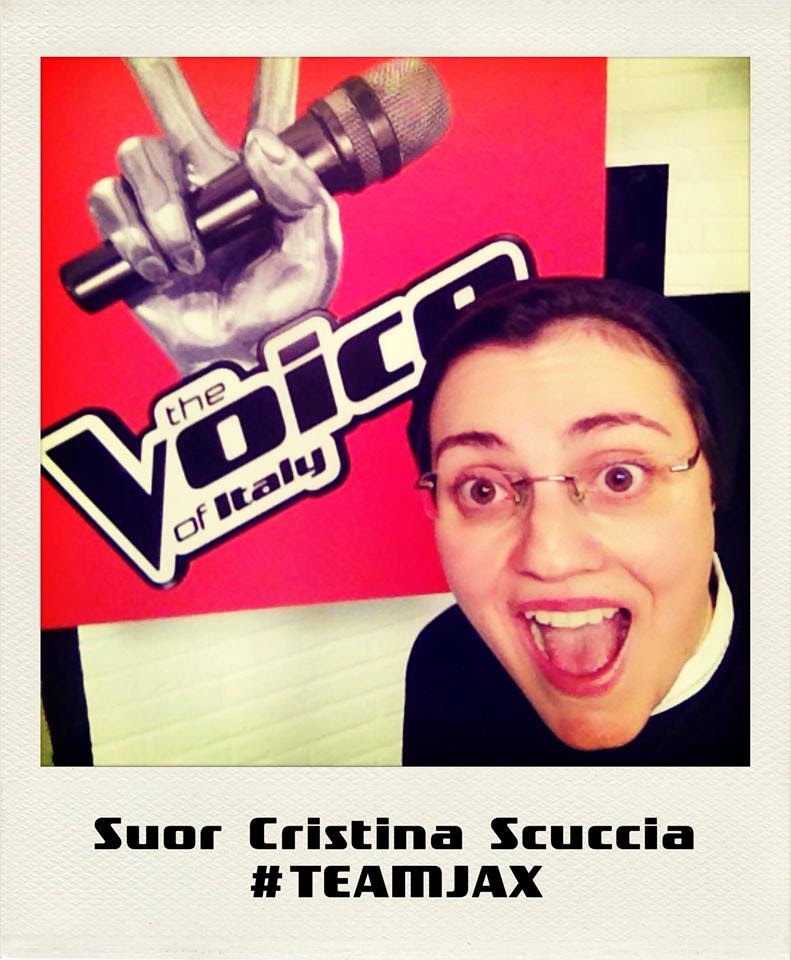 With the Novus Ordo church everything is surreal.  When you have changed all the sacraments and the highlight is a man-centered Novus Ordo Missae what else is expected?  Last night on an Italian television program named The Voice of Italy there appeared a singing nun.  Suor Cristina or Sister Cristina formerly Cristina Scuccia is Sicilian and twenty-five years old.  She currently lives in Milan where she is a Ursuline nun of the Holy Family.  Suor Cristina has dreamed since childhood of becoming a professional singer.  It was music that originally attracted her to the convent.  In 2008 the Ursuline nuns were having tryouts for a musical which Cristina happened to chance upon.  At the time she was in rebellion against the Novus Ordo church but she was cast in the part of a sister and she fell in love with being a nun.  This isn't the first time she has appeared on television.  Franco Simone, Cristina's music teacher, had a television program, Star Rose Academy, in which he invited her to compete on.  From that previous experience she went on to the Good News Festival 2013 which she won. Finally Suor Cristina appears on The Voice of Italy which we will briefly discuss.

The following quotes have been translated from the Italian to English and are not perfect as we didn't have a transcript to work from nor the time to transcribe everything said but it does give the reader an idea of how the Italian judges and Suor Cristina view the Novus Ordo church.

After finishing singing with the crowd standing and chanting, "sister, sister, sister..." the judges said what they thought of Suor Cristina in hopes of getting her to choose to be on one of their singing teams...


"You're the sister I'm the uncle, if you sing in church on Sundays with the donations they can
avoid paying the taxes, if I found you as a child when I went to church, I would be Pope!
You and I are unbeatable, we are the devil and holy water, you have to come with me."
- J-Ax -

"Good evening sister, but are you really a nun? How did it enter your mind to come on
The Voice ...? I do not understand anything, your welcome to choose."
- Raffaella Carra -

"When I turned around I thought I had a vision problem, I also like the choice of
the modern song, I am holy water like you, we are an
impeccable duo, do not choose the devils."
- Noemi -

"I still have not woken up from when I turned around, I'm pinching myself, you're
amazing, can you imagine what it would be if we are in the same team
together, let's make holes in the ground, call it what
you would like my mother, go in peace."
- Piero Pelu -

Who do you think Suor Cristina chose?

She picked J-Ax who flashed the 'corna' or 'devil horns' before he hugged her.  As she relates, "I had promised myself that I would chose the first (judge) to turn around."


When asked why she was on The Voice of Italy she replied of her fellow nuns who were behind the stage "they have been pushing me to participate."


"I'm a nun very true, I came to The Voice because
I have a gift I give you."

"Because he (Francis) invites us to go out, to evangelize,
to say that God does not detract, in fact
gives us even more. I'm here for this."

Raffaella Carra asked, "What do you believe the Vatican thinks of you?"

Can you believe this is what passes for a religious in the Novus Ordo church?  Nuns used to go to Mass,  pray, teach in catholic schools, perform corporal acts of mercy like feeding the poor, and helping the sick.  Suor Cristina is a reflection of the several past leaders of the Novus Ordo church but none more than Francis.  She really thinks she is doing God's work on this earth by going on television and singing rock 'n roll pop tunes!  This is where the S.S. Novus Ordo takes you along its voyage towards its final destination, Apostasy!  Let us pray for Cristina Scuccia with the intention she finds the Faith and saves her soul for all eternity.