An apostate says what

"The majority of us know how to coexist, it's easier for us,
and that's a clear message. It's a message that we have
the same Father, up in Heaven, and the same
Father down on earth, we adore him.”
- Francis -

"What you have done, visiting these towns, the synagogues,
mosques and Christian churches, is an act of brotherhood
and a seed. A seed to build that culture of encounter
that we all have to carry forward.”
- Francis -

(Video with the above quotes of Francis to traveling delegation.)

Francis said those statements just 85 days ago on Friday 28 February 2014 when he met with the 15 Muslims, 15 Jews, and 15 Christians in the Vatican returning from their recent trip to Israel.  Is Francis telling the truth?  We think he is.  The Modernists who follow the Novus Ordo church & the ambiguous teachings of  Vatican II do follow and pray to the same being as the perfidious Jews and the heretical Muslims do.

Do Muslims and Jews acknowledge Jesus the Christ as the Messiah?  Of course they do not for if they did they would be Catholics instead.

"And every spirit that dissolveth Jesus, is not of God: and this is Antichrist, of whom you have heard that he cometh, and he is now already in the world."
- 1st Epistle Of Saint John 4:3 -

Jesus saith to him: Have I been so long a time with you; and have you not known me? Philip, he that seeth me seeth the Father also. How sayest thou, shew us the Father?  Do you not believe, that I am in the Father, and the Father in me?  The words that I speak to you, I speak not of myself. But the Father who abideth in me, he doth the works. Believe you not that I am in the Father, and the Father in me? Otherwise believe for the very works' sake. Amen, amen I say to you, he that believeth in me, the works that I do, he also shall do; and greater than these shall he do.  Because I go to the Father: and whatsoever you shall ask the Father in my name, that will I do: that the Father may be glorified in the Son. If you shall ask me any thing in my name, that I will do.
- Gospel According to Saint John 14:9-15 -

You are of your father the devil, and the desires of your father you will do. He was a murderer from the beginning, and he stood not in the truth; because truth is not in him. When he speaketh a lie, he speaketh of his own: for he is a liar, and the father thereof.
- Gospel According to Saint John 8:44 -


"You Mohammedans are in a state of everlasting damnation. Your Koran is not God's law nor is it revealed by Him. Far from being a good thing, your law is utterly evil. It is founded neither in the Old Testament nor in the New. In it are lies, foolish things, buffooneries, contradictions, and much that leads not to virtue and goodness but to evil and to all manner of vice."
- Blessed Nicholas Tavilich -

"But the holy monk having declared that Mahomet was a disciple of the devil, and that his followers were in a state of perdition, he also was condemned (to martyrdom) with his companions."
- St. Alphonsus de Liguori on the Holy Monk St. Goerge of San Saba - 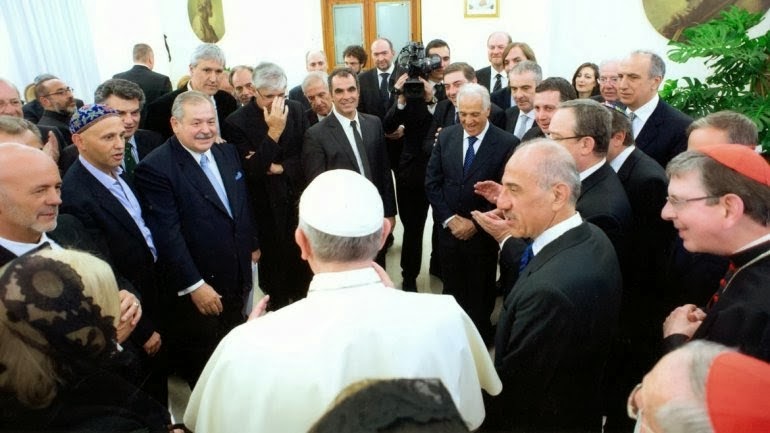 
"There can be nothing more dangerous than those heretics who admit nearly the whole cycle of doctrine, and yet by one word, as with a drop of poison, infect the real and simple faith taught by our Lord and handed down by Apostolic tradition"
- Pope Leo XIII's encyclical Satis Cognitum  -

15. Every man is free to embrace and profess that religion which, guided by the light of reason, he shall consider true. -- Allocution "Maxima quidem," June 9, 1862; Damnatio "Multiplices inter," June 10, 1851.


"Who is to be called a Christian? He who confesses the doctrine of Christ and His Church. Hence, he is truly a Christian thoroughly condemns and detests, the Jewish, Mohammedan, and the heretical cults and sects."
- St. Peter Canisius -

"Jesus saith to him: I am the way, and the truth, and the life. No man cometh to the Father, but by me. If you had known me, you would without doubt have known my Father also: and from henceforth you shall know him, and you have seen him."
- Gospel According to Saint John 14:6-7 -
Posted by hereisjorgebergoglio at 2:40 PM