Karaoke (Suor) Cristina is going to the finals!!!

The wannabe rock 'n roll pop star who moonlights as a nun, Suor Cristina, has been victorious in the semi-finals and will be competing in the June 5th finals to be the next Voice of Italy!  Will she get her wish and meet Francis?  After all she believes, as do her fans, that she is evangelizing the world by sharing her love of music.  Tonight, Suor Cristina karaoke(d) her way through three songs: Le copa de la vida, The Time of My Life, and Sally.

The Time of My Life

A cleaner version of the hit song
from the movie Dirty Dancing.

translation of Sally from Italian to English below

but, Sally, perhaps this is the meaning of your roaming
perhaps you have to feel a little bad in the end
perhaps in the end of this sad story
someone will find the courage
to deal with feelings of guilt
and delete them from this journey
to really live each moment
along with its excitement
and as it was the last one

Sally walks down the street and she's thoughtless
it's about evening
the lights of street lamps light up
all people runs at home in front of the televisions
and a thought goes through her head
perhaps life wasn't all lost
perhaps something was saved
perhaps it wasn't really all wrong
perhaps it was right just so
perhaps... perhaps... yes, it was

so, what can I say?
hear, what a gentle sound


Let's get started in recapping tonight.  Nothing says you're a nun like singing a song with an open sodomite, Ricky Martin.  On his website Ricky wrote, "I am proud to say that I am a fortunate homosexual man. I am very blessed to be who I am" and he further states happiness comes from sodomy!  Next Suor Cristina sings The Time of My Life the melody associated with the movie Dirty Dancing.  In the movie the anti-heroine played by Jennifer Grey borrows money from her father to finance an abortion and also learns to dirty dance so this same woman can go get her abortion!  Singing this song is definitely not Mary-like behavior.  To finish the night, Suor Cristina warbles her way through Vasco Rossi's song Sally.  As the translated lyrics above attest, it is not exactly an uplifting song nor one about God.  So it fits the bill for Novus Ordo Cristina!  We almost forgot to mention Suor Cristina brought her coach, J-ax, to tears once again.  Oh see, she has to be of God if she is making him cry.  Remember with modernists it is all about a personal 'faith' experience!

Could someone please put a fork in this woman? 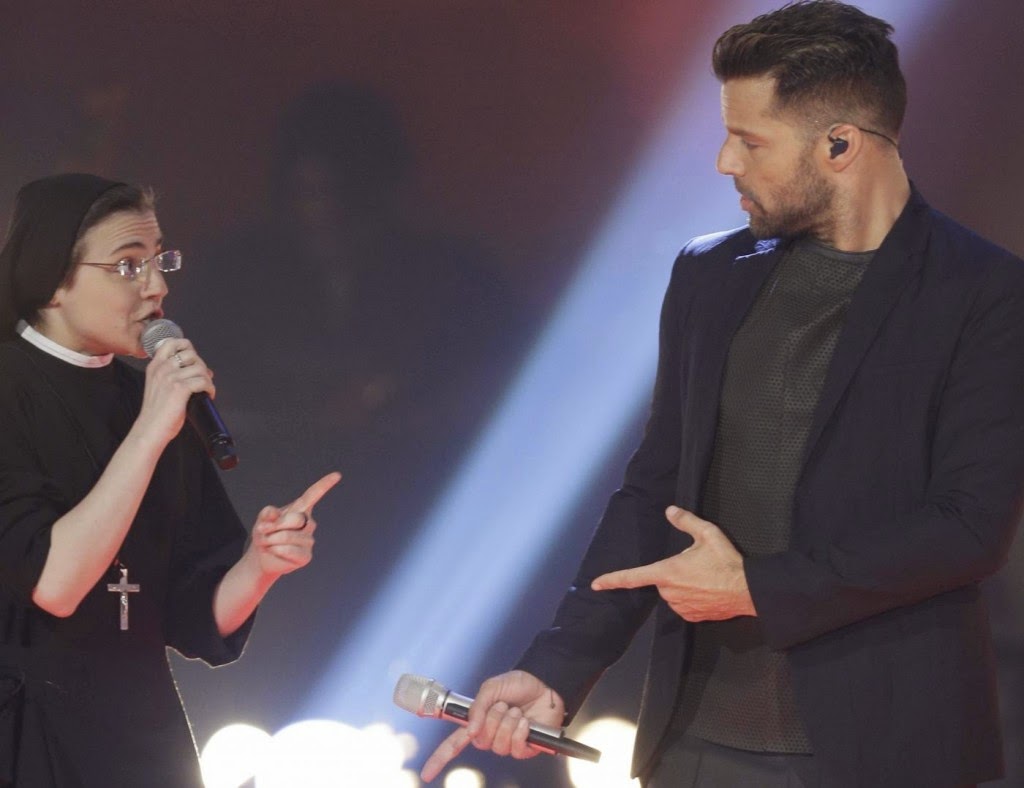 Sodomy, abortion, and sacrilegious behavior,
it's all good in Francis' Novus Ordo church!

Posted by hereisjorgebergoglio at 11:26 PM