the true face of Talmudism shows itself


Maurice Pinay's Blog has done it again with another excellent post about the 'welcoming party' of youths who follow the teachings of the orthodox rabbis & the Talmud.  Below is a scan of a pamphlet these youths were passing out.  In recent days they have also hung anti-Catholic banners, sprayed 'price-tag' graffiti on Churches, and damaged Christian properties.  We expect Francis to remain silent on these matters and instead mouth a pithy platitude similar to the late Rodney King's, "Can we all get along" while he holds hands with the perfidious Rabbi Skorka and the heretical Iman Abboud.  Interestingly, in a state filled with terrorism which detains Moslems and Christians without formally charging them, these Judaic youths are let off.  Arutz Sheva 7 has an article, Court Rejects Police 'Restraining Order' to Stop Pope Protests, explaining all this.  We guess some people in Israel are more equal than others.  One other thing to point out is the name which the pamphlet uses to refer to Jesus the Christ.  It is the same rabbinical acronym we wrote of earlier in, update on the White Crucifixion, which is simply "YESHU = May his name and his memory be wiped out."  Remember Francis believes everyone prays to the same God regardless of their religion & these Judaic criminals are God's chosen people who have a covenant with God which is still valid.  Please take the time to read Maurice Pinay's most important post.

Read the pamphlet the Judaic youths were passing out to see the real face of the Talmudic religion and not the censored false 'we are the eternal victims' version shoved down the world's throats by the media! 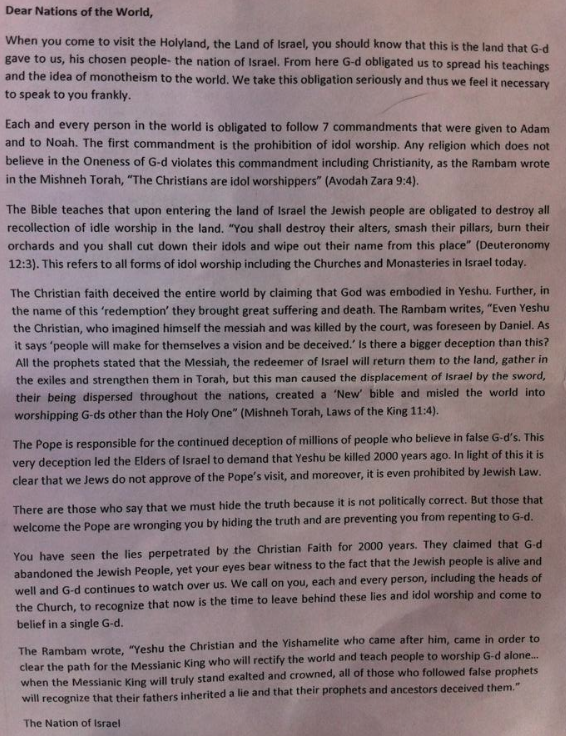 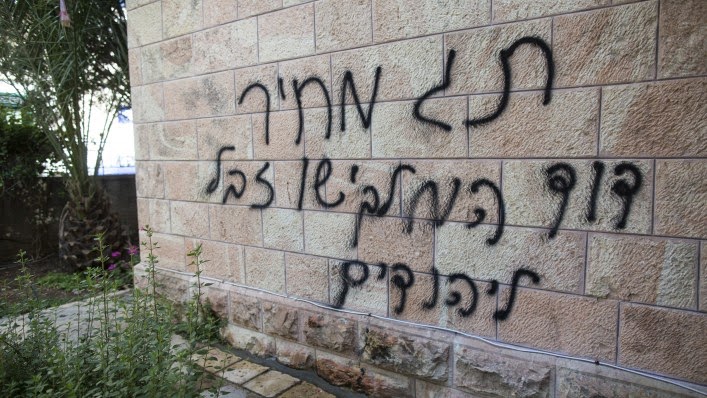 Anti-Christian graffiti reads, “Price tag, David (is) the king, Jesus (is) Junk for the Jews”
It was spray painted recently on the Romanian Church in Jerusalem.
Posted by hereisjorgebergoglio at 12:20 AM