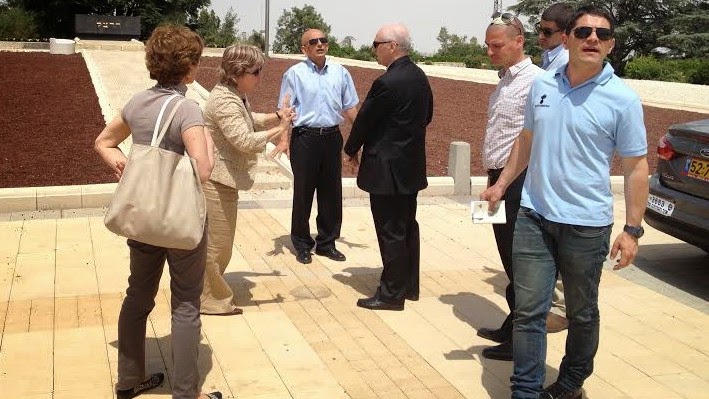 An update to our post, Francis' upcoming Monday in Jerusalem.  The cat is out of the bag now, with the Jewish press talking about the upcoming wreath-laying by Francis at the tomb of Theodor Herzl.  Francis' best rabbinical friend forever, Rabbi Abraham Skorka opines as to why Francis is doing this act in an article published by The Times of Israel entitled, Pope’s rabbi friend hails significance of wreath-laying at Herzl’s grave.  Below, immediately following that article is an excerpt from The Diaries of Theodore Herzl, edited and translated by Marvin Lowenthal.  Thanks to Dr. Droleskey of Christ or Chaos for bringing this important document to our attention.  This excerpt demonstrates that there was a day not long ago in which Pontiffs rejected the pharisaical rabbinic religion and the counterfeit Jewish people.  Pius X refused to embrace them until they accepted Jesus Christ as their Messiah.  How unlike Francis who worships in their synagogues, honors their rabbis, and consults rabbinical writings on what the Bible really says.

Pope Francis will adhere to a policy of “total balance” regarding the Israeli-Palestinian conflict, his close friend Rabbi Abraham Skorka said Wednesday in Jerusalem, though he noted that Francis’s scheduled laying of a wreath at the grave of Theodor Herzl would be “a meaningful act.”

Four days before the pontiff’s scheduled arrival in the region, Skorka dismissed reports that the pope would use his speeches in Israel, Jordan and the Palestinian territories to recognize the “State of Palestine” and call for an end of the “occupation” of the West Bank.

Pope Francis himself on Wednesday described his upcoming trip as “strictly religious” and aimed at praying for peace in the region.

“He will try to be balanced,” said Skorka, the rector of the Seminario Rabinico Latinoamericano in Buenos Aires, who became friends with the pope years ago when he was still Cardinal Jorge Bergoglio.

Archbishop Guiseppe Lazzarotto, the Holy See’s chief diplomatic envoy to Israel, likewise rejected the notion that the pope might make controversial policy statements during his two days in Israel and the Palestinian areas. “The visit is absolutely not political,” the apostolic nuncio told The Times of Israel during a visit to Mount Herzl, where together with Foreign Ministry staff he inspected the site ahead of the pope’s scheduled stop there on Monday. Francis will lay a wreath at the grave of Zionist visionary Herzl.

The Vatican’s official website for the visit to the Holy Land lists a “courtesy visit to the President of the State of Palestine” for Sunday, and AP reported that West Bank artisans “are fashioning a cross with cement pieces of Israel’s [security] barrier for the Palestinian president to give the pope.” One Israeli website has been quoting sources saying that the pope considers himself the “Che Guevara of the Palestinians” and that he will be seeking to support their “struggle and rights” during his visit. “He is taking a helicopter directly from Jordan to Palestine — to Bethlehem. It’s a kind of sign of recognizing Palestine,” Father Jamal Khader of the Latin patriarchate in Jerusalem was quoted as saying.

Skorka has been invited, together with Imam Omar Abboud, a leader of Argentina’s Muslim community, to join the pope during the trip. “This will be the first time that non-Christians are traveling on the pope’s plane,” Skorka said in Spanish, speaking through an interpreter.

Speaking at an event organized by the Jerusalem Press Club and Fuente Latina, Skorka noted that Francis’s visit to Mount Herzl and Herzl’s grave could be understood as a nod to Zionism. “That is a meaningful act,” Skorka said. “He understands the importance of the land of Israel and the state of Israel to the Jewish people.” The two last popes who visited Israel — John Paul II in 2000 and Benedict XVI in 2009 — did not visit Herzl’s grave. (The first pope to visit, Paul VI in 1964, steadfastly refused to acknowledge that he was even in Israel.)

The pope is coming to send a message of peace and interfaith understanding, Skorka said, adding that the fact that he asked a rabbi and an imam to join him underlined his conviction that unity and peace can be achieved. The pope will be joined by the two clergymen for a joint prayer at the Western Wall on Monday, the rabbi noted.

Francis’s close ties to the Jews of Argentina are fairly well known. He and Skorka have been close friends since the days when Francis was known as cardinal Jorge Bergoglio, archbishop of Buenos Aires. In September 2013, Skorka spent a week at St. Martha’s House, the papal residence at the Vatican. The two also coauthored a book, “On Heaven and Earth,” and have prayed from each other’s pulpits.

Skorka said he didn’t remember exactly how his conversations with Bergoglio began, but the two had come to know each other through the city’s religious events. Skorka wrote articles on interfaith issues for a newspaper the cardinal read. In person, they would needle each other about whose soccer team was winning. But more than that, Skorka said they were united in trying to reach people who had fallen away from their own religions and instead worshiped what the rabbi calls the “idols” of money, power and sex. Growing secularism has hit both the Catholic Church and Jewish communities in Latin America. The church has also lost many parishioners to popular Pentecostal movements.

In an interview in November, Skorka had said he hoped to pray with the pope both at the Western Wall, the holiest place where Jews can pray, and in Bethlehem, “to show the world it is possible.” 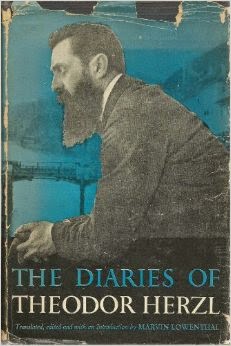 Pius X met with Theodor Herzl on January 25, 1904 and they exchanged thoughts about Zionism.

POPE: We are unable to favor this movement [of Zionism]. We cannot prevent the Jews from going to Jerusalem—but we could never sanction it. The ground of Jerusalem, if it were not always sacred, has been sanctified by the life of Jesus Christ. As the head of the Church I cannot answer you otherwise. The Jews have not recognized our Lord, therefore we cannot recognize the Jewish people.

HERZL: [The conflict between Rome and Jerusalem, represented by the one and the other of us, was once again under way. At the outset I tried to be conciliatory. I said my little piece. . . . It didn’t greatly impress him. Jerusalem was not to be placed in Jewish hands.] And its present status, Holy Father?

POPE: I know, it is disagreeable to see the Turks in possession of our Holy Places. We simply have to put up with it. But to sanction the Jewish wish to occupy these sites, that we cannot do.

HERZL: [I said that we based our movement solely on the sufferings of the Jews, and wished to put aside all religious issues].

POPE: Yes, but we, but I as the head of the Catholic Church, cannot do this. One of two things will likely happen. Either the Jews will retain their ancient faith and continue to await the Messiah whom we believe has already appeared—in which case they are denying the divinity of Jesus and we cannot assist them. Or else they will go there with no religion whatever, and then we can have nothing at all to do with them. The Jewish faith was the foundation of our own, but it has been superceded by the teachings of Christ, and we cannot admit that it still enjoys any validity. The Jews who should have been the first to acknowledge Jesus Christ have not done so to this day.

HERZL: [It was on the tip of my tongue to remark, “It happens in every family: no one believes in his own relative.” But, instead, I said:] Terror and persecution were not precisely the best means for converting the Jews. [His reply had an element of grandeur in its simplicity:]

POPE: Our Lord came without power. He came in peace. He persecuted no one. He was abandoned even by his apostles. It was only later that he attained stature. It took three centuries for the Church to evolve. The Jews therefore had plenty of time in which to accept his divinity without duress or pressure. But they chose not to do so, and they have not done it yet.

HERZL: But, Holy Father, the Jews are in a terrible plight. I do not know if Your Holiness is aware of the full extent of their tragedy. We need a land for these harried people.

POPE: Must it be Jerusalem?

HERZL: We are not asking for Jerusalem, but for Palestine—for only the secular land.

POPE: We cannot be in favor of it.

[Editor Lowenthal interjects here] Here unrelenting replacement theology is plainly upheld as the norm of the Roman Catholic Church. Further, this confession, along with the whole tone of the Pope in his meeting with Herzl, indicates the perpetuation of a doctrinal emphasis that has resulted in centuries of degrading behavior toward the Jews. However, this response has the “grandeur” of total avoidance of that which Herzl had intimated, namely that the abusive reputation of Roman Catholicism toward the Jews was unlikely to foster conversion. Further, if, “It took three centuries for the Church to evolve,” it was that very same period of time that it took for the Church to consolidate and launch its thrust of anti-Semitism through the following centuries.

HERZL: Does Your Holiness know the situation of the Jews?

POPE: Yes, from my days in Mantua, where there are Jews. I have always been in friendly relations with Jews. Only the other evening two Jews were here to see me. There are other bonds than those of religion: social intercourse, for example, and philanthropy. Such bonds we do not refuse to maintain with the Jews. Indeed we also pray for them, that their spirit see the light. This very day the Church is celebrating the feast of an unbeliever who became converted in a miraculous manner—on the road to Damascus. And so if you come to Palestine and settle your people there, we will be ready with churches and priests to baptize all of you.

Posted by hereisjorgebergoglio at 3:14 PM