addendum to the White Crucifixion

We are indebted to an intrepid reader of Call Me Jorge... who sent us this paper but wishes to remain anonymous.  The paper, The Holocaust is a Christian Issue by Richard A. Cohen, can be read (and should) in its entirety by (clicking here).  It gives the reader a peak into the psyche of an alchemist who is in the process of transforming his most hated enemy's religion into a golem to serve Talmudic Judaism.  Below is an excerpt from this paper on the artist Marc Chagall and his work the White Crucifixion.  Underlines are ours for emphasis.


The Holocaust is a Christian Issue
by Richard Cohen,
Lecture presented in Jerusalem June 20, 2001

Let me say, in an autobiographical note, that my thesis was inspired by crucifixion and resurrection paintings of Marc Chagall, the most famous of which is probably the "White Crucifixion" of 1938. In these painting, made from 1938 to 1948, Chagall depicts the crucifixion. But the man crucified, clearly Jesus, wears a loincloth that is a Jewish prayer shawl, a tallit. Thus he is unmistakably a Jewish Jesus. And he is set among figures of contemporary oppression: Nazis, Stalinists, and angry mobs. Art historian Monica Bohm-Duchen, in her excellent 1998 book on Chagall, is no doubt right in seeing in these paintings, and the White Crucifixion, in particular, ä direct response to specific historical events: in the case of this work, the German Aktion of 15 June 1938 in which 1,500 Jews were dispatched to concentration camps; the destruction of the Munich and Nuremberg synagogues on 9 June and 10 August respectively; the deportation of Polish Jews at the end of October; and the outbreak of vicious pogroms, including the infamous Kristallnacht, known as the Night of Broken Glass, of 9 November 1938."[x] These paintings graphically depict the concrete anguish of the Jews by means of the central symbol of Christianity.

When I first saw Chagall's resurrection and crucifixion paintings I was repulsed and perplexed by them. I wondered why a Jew would work on such themes, when for Jews the cross and crucifixion have always been, in both their Roman and their Christian manifestations, dark symbols of murder, violence, and destruction, symbols of Jew hatred. But then I realized that Chagall did not paint these pictures for Jews. Rather, they are for Christians. Already, in 1938, and then throughout the Nazi mass murder of the Jews, Chagall was saying to the Christians of Europe: "Don't you see? Don't you understand? When the Nazis kill Jews they are killing Christ." Thus I came to see that these paintings were no less political, no less spiritual, and no less powerful than Picasso's "Guernica," which graphically depicts the horrors of modern aerial warfare in order to make a visceral and powerful statement against it. I wondered, then, what might have been if Chagall's paintings had been displayed - and understood - throughout Europe. It is the same hopeful wondering that I have had with regard to Charlie Chaplin's brilliant 1940 motion picture "The Great Dictator," which mocked Hitler, and made him a laughingstock. Had these paintings, or had that movie, been shown throughout Europe, and been understood, could the Holocaust have happened? Could Christians have allowed their own Christ to be crucified again, six million times again? Well, it is an experiment that cannot be undertaken; the paintings were not shown, and hence they were not understood, and more profoundly, history, alas, cannot be undone.

If the Jews killed Christ then they are forever like Cain, a marked people, a people of evil, deserving of contempt. If the Romans killed Christ, then one can still flee from their tyranny into a safe haven of sentimental spiritual salvation, as the Jews fled to the desert leaving Pharaoh's Egypt behind and intact. In both cases, someone else is responsible, not me but him, not us but them. They are damned but we are saved. But if, to the contrary, the Christians killed Christ - like the ancient Israelites who after receiving God's revelation at Mount Sinai nonetheless, in less than two months, erected and worshipped a Golden Calf, thereby committing, they themselves, their greatest sin, for which they themselves have forever thereafter taken responsibility - then Christians, too, can begin to accept culpability and take responsibility for their greatest sin. The true image of the Christian, then, is not the opposite of perfidious Jews or the cruel Romans, of Pilate the Roman or Judas the Jew. Rather, and precisely, like all the disciples of Jesus, it is the image of Judas the Christian.

Jews and Romans killed Jesus; such is the unalterable narrative of the Gospels. When did the Christians kill Christ? When do they kill Christ? When they are irresponsible, when they blame others for the sins of the world. First, when they demonized the Jews, which led to countless humiliations and slaughters, and finally to the Holocaust. Second, when, in response to Rome, they rendered unto Caesar what was his, which led to political apathy, abdication, escapism, and abandonment of the redemptive struggle for human liberation. Third, and finally, when they narrowed Christ's love into hatred - however sweet - of all other spiritual paths not Christian. Christian exclusivity, of which hatred of the Jews, however gentle, is but one subset, even if a very special subset, remains today as the great unresolved sin of Christianity against Christ.

This, it seems to me, is the burden and the task that Christian theology must take upon itself and comes to grips with in the new millennium. If Christ is to be the "Prince of Peace," as Christianity claims, then it must come to understand that true peace is found in the harmonization of differences, not in their elimination. 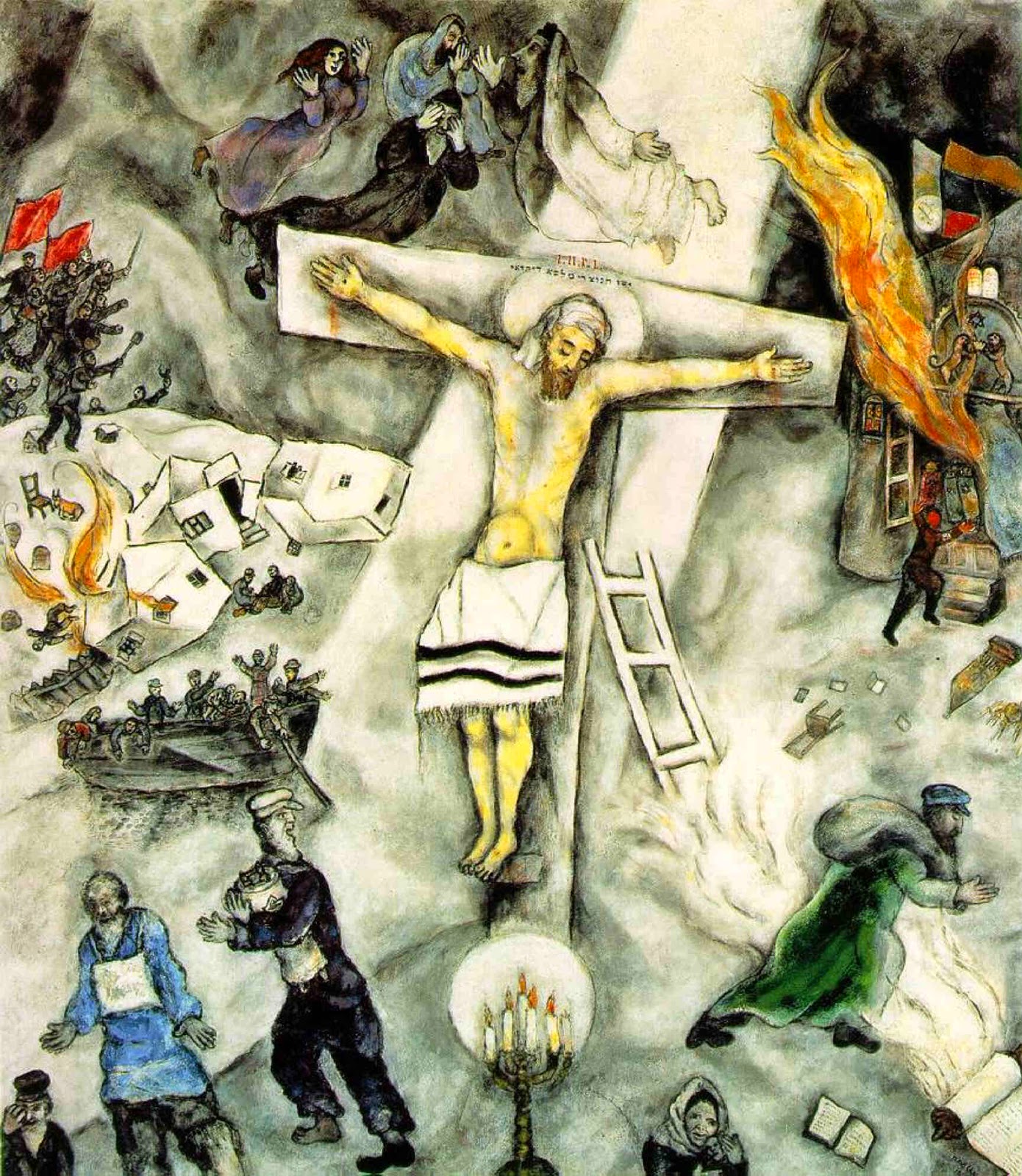 Dear reader is it any wonder why this blasphemous
painting is Francis' favorite piece of artwork?
Posted by hereisjorgebergoglio at 1:35 PM