Netanyahu and Francis 'spar' over the language of Jesus the Christ 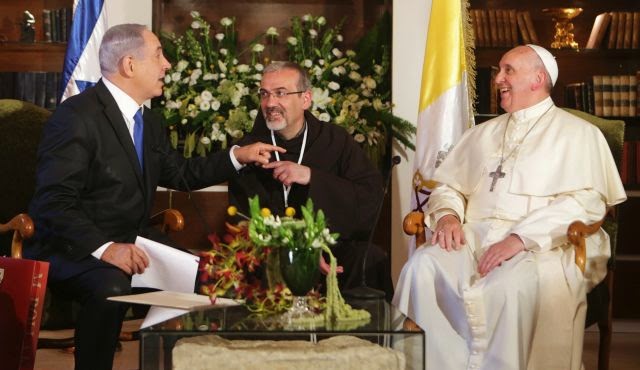 Another interesting insight from the Maurice Pinay Blog.  Writing about the recent verbal exchange between, Israeli Prime Minister, Benjamin Netanyahu & Francis, Maurice gives the reader an understanding of how 'pilpul' functions.  Not only in Talmudic circles but also in the Novus Ordo church.  The Vatican has adopted many of its values and laws from their so called "Elder Brothers" and with every day that passes by it resembles Christianity less and less.  Francis shows he is an adept practioner of 'pilpul' and uses this Talmudic trick with regularity in his dealings.  We here at Call Me Jorge... wonder if Netanyahu and Francis both studied at the same yeshiva?

What is "Pilpul"?  According to David Shasha, Director of the Center for Sephardic Heritage, in an article he wrote,  What Is Pilpul, And Why On Earth Should I Care About It?


..."As Soloveitchik states, the Ashkenazi rabbis were less concerned with promulgating the Law transmitted in the Talmud than they were with molding it to suit their own needs. Pilpul was a means to justify practices already fixed in the behaviors of the community by re-reading the Talmud to justify those practices."

..."As if this was not enough, the Tosafists instituted one more pilpul principle into Talmudic discourse. This was called the Lav Davqa method. In English we might call it the "Not Quite" way of reading a text. When a text appeared to be saying one thing, the Tosafot -- in order to conform to the already-existing custom -- would re-interpret it by saying that what it seemed to mean is not what it really meant!"

..."What this means for contemporary Jewish discourse is critical: Even though many contemporary Jews are not observant, pilpul continues to be deployed. Pilpul occurs any time the speaker is committed to "prove" his point regardless of the evidence in front of him. The casuistic aspect of this hair-splitting leads to a labyrinthine form of argument where the speaker blows enough rhetorical smoke to make his interlocutor submit. Reason is not an issue when pilpul takes over: what counts is the establishment of a fixed, immutable point that can never truly be disputed.

In this context, the Law is not primary; it is the status of the jurist. Justice is extra-legal, thus denying social equality under the rubric of a horizontal system. Law is in the hands of the privileged rather than the mass.

What is thought to be the Jewish "genius" is often a mark of how pilpul is deployed. The rhetorical tricks of pilpul make true rational discussion impossible; any "discussion" is about trying to "prove" a point that has already been established. There is little use trying to argue in this context, because any points being made will be twisted and turned to validate the already-fixed position.

Pilpul is the rhetorical means to mark as "true" that which cannot ever be disputed by rational means."


Watch the two masters of Pilpul play their game.

Thanks to Maurice Pinay for pointing out this previous entry of his on what a 'Jewish genius' is.  Straight out of the mouth of a rabbi of Reform Judaism,

Posted by hereisjorgebergoglio at 5:01 PM