turning Our Lord's Baptism into a photo-op

Here's a video of the photo-op watch the first 12 minutes.

One thing which stands out about Francis' trip to Jordan, the occupied Palestinian territories, and Israel is everywhere he went it was showtime!  Everything was done for the adulation of the crowd, the media, or his puppet masters.  Francis treated Christ as if he were a backdrop/extra on a movie about humble Francis.  Not wanting to spread the word as commanded by Jesus the Christ,


Instead, Francis chose to have 'faith experiences' and participated in the 'culture of encounter.'  Whether it was praying with a Moslem and Jew at the Kotel, placing flowers on the grave of Theodor Herzl, praying with Ecumenical Patriarch Bartholomew at the Church of the Holy Sepulcher, kissing six hands at Vad Yashem, or his visit to the al-Aqsa Mosque, Francis neglected not only Christ's command but helped spread apostasy through his actions.  We guess, old Church laws like communicatio in sacris no longer apply.  The warmup act which happened before all this was his visit to Bethany beyond the Jordan.

Some photos below with Call Me Jorge...'s comments.  Please, bear with us the payoff is at the end.  So without further ado... 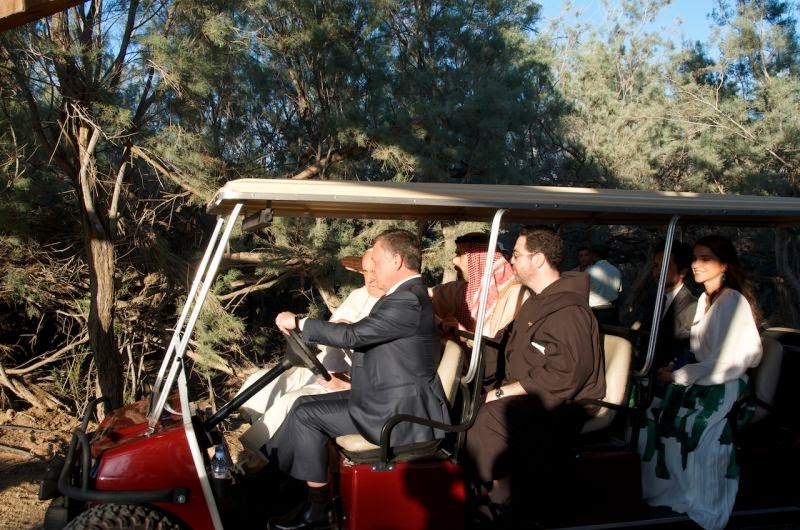 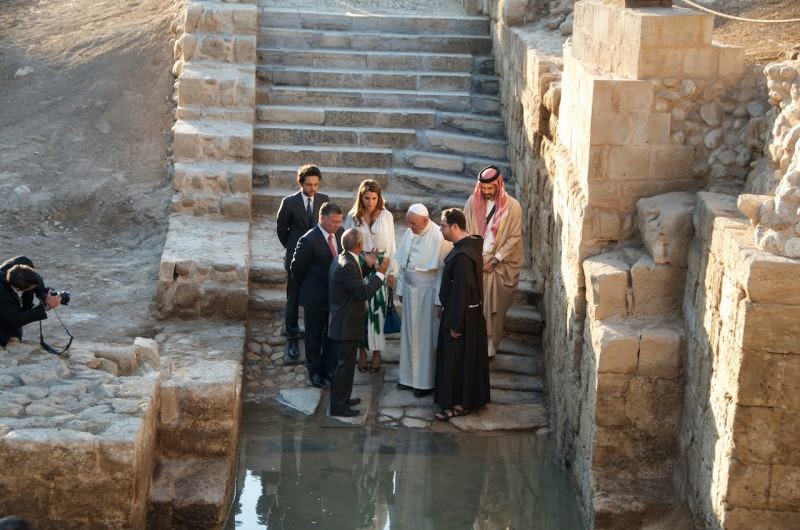 They arrived at the spot where John the Baptist, baptized his cousin Jesus the Christ. 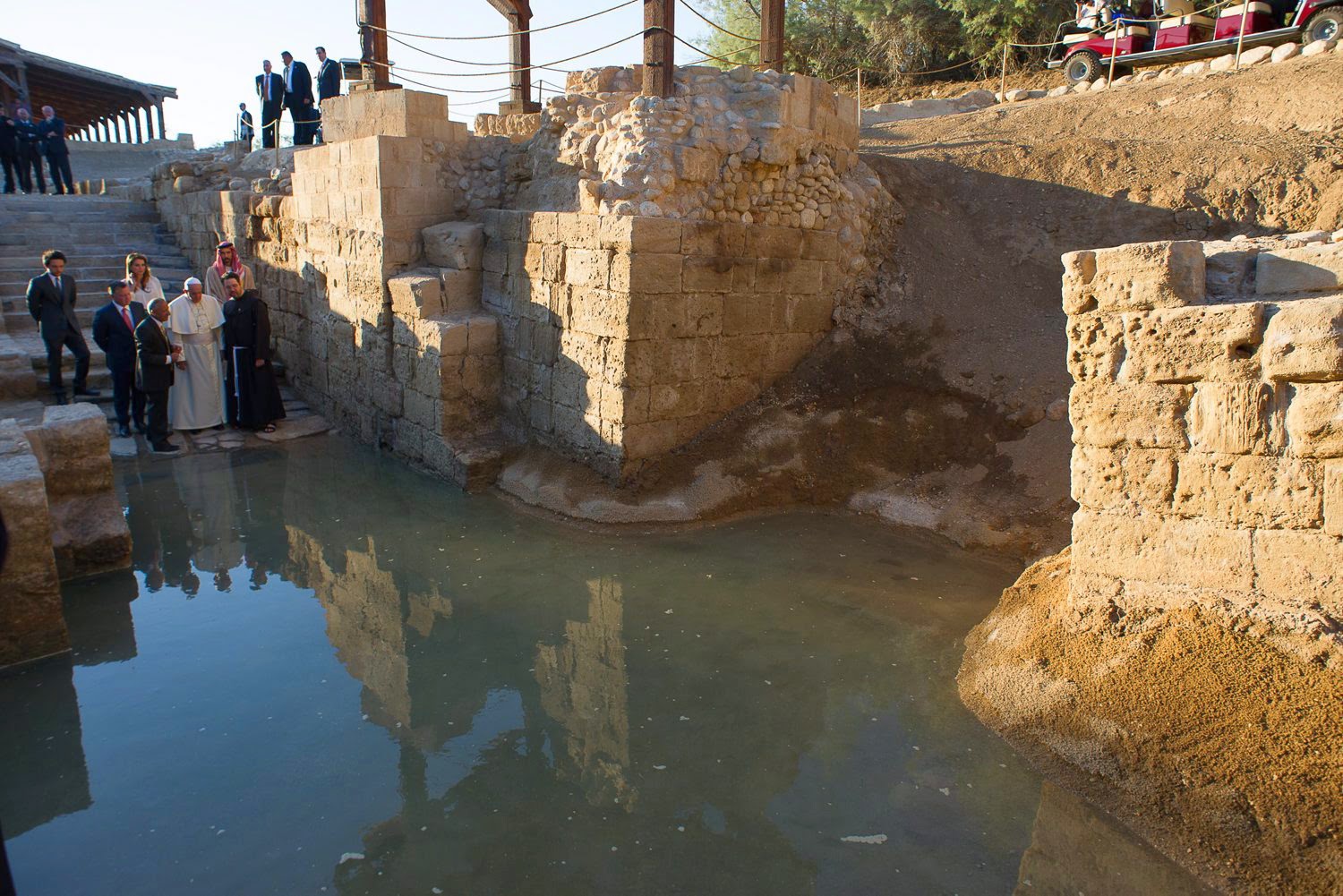 Far away shot of the pool, it is very large. 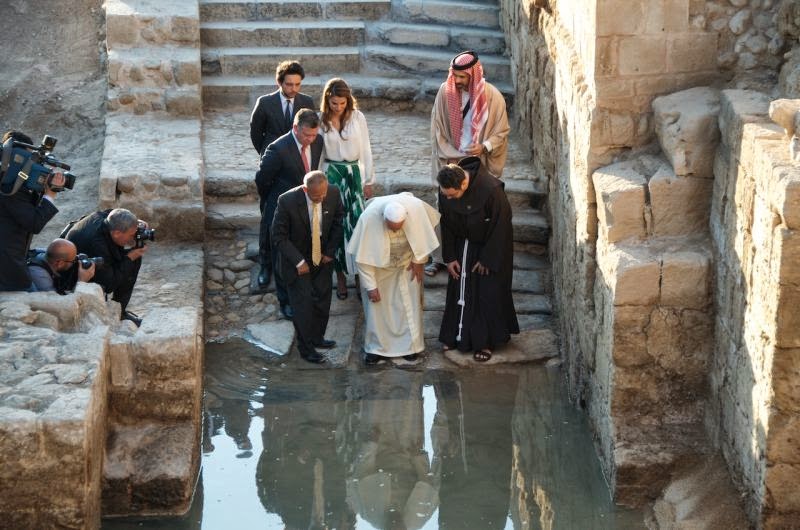 Francis humbly bends over to dip his hand into the pool. Francis gets his hand wet. 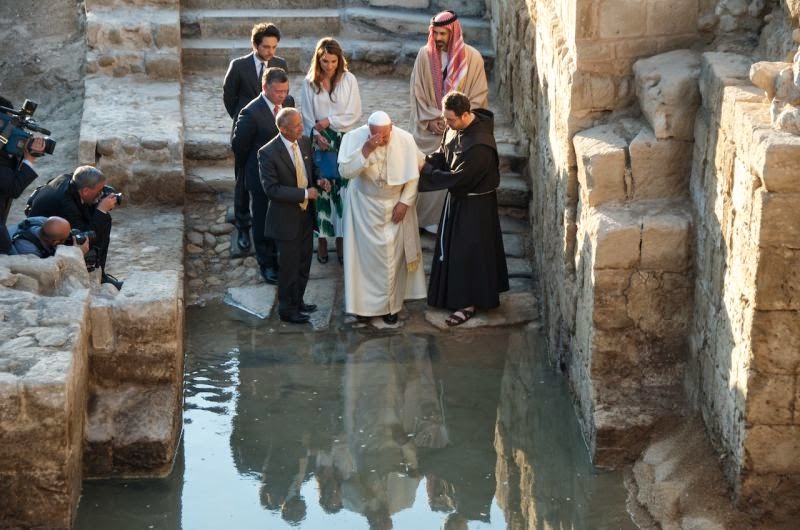 Francis makes sign of the cross for his photo-op. 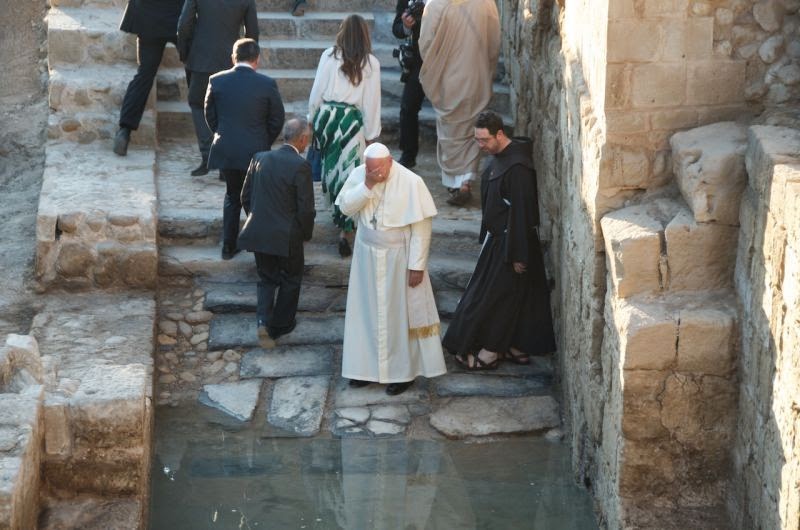 Rubbing his face for the camera as if he is agonizing over something. 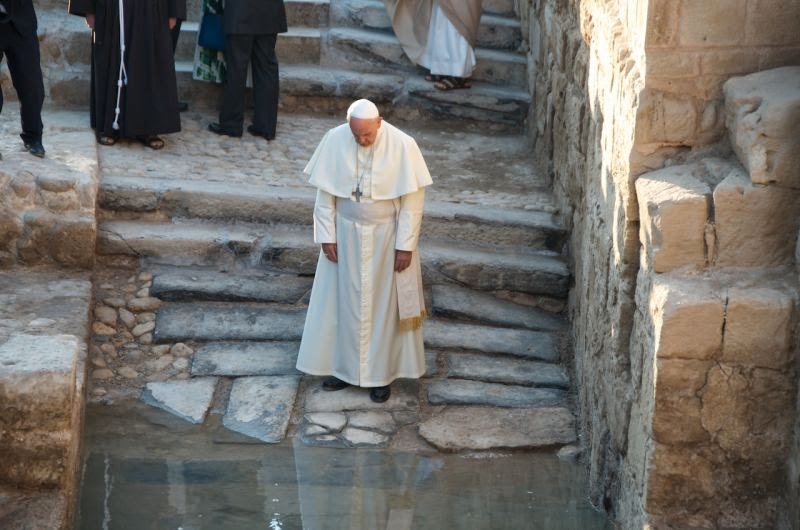 The narcissist, Francis, looking at his reflection in the water. 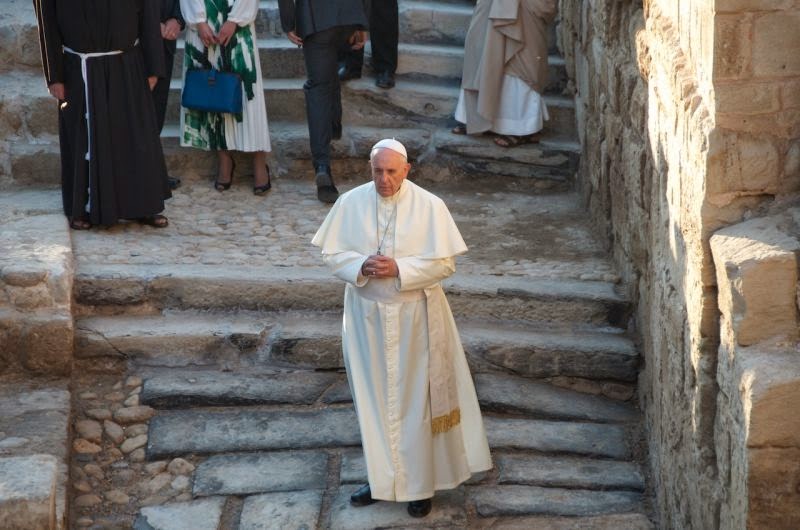 Francis doing his best to act humble while he thinks about how
he will soon put a wreath on Herzl's grave. 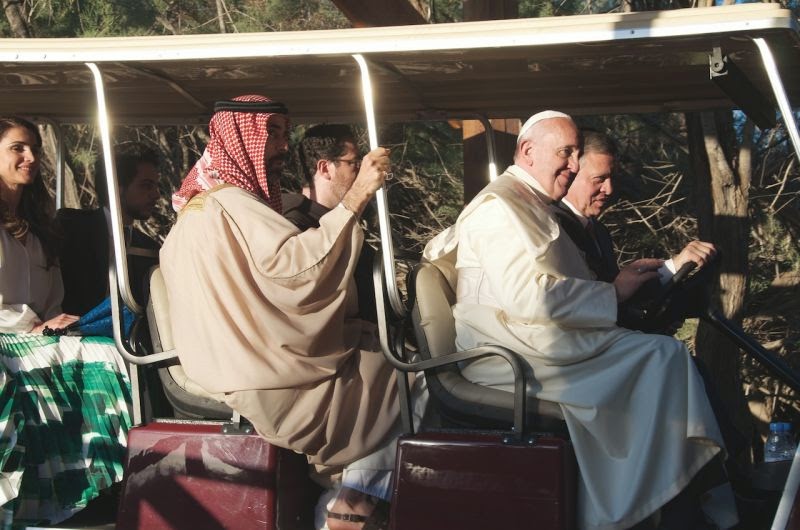 The king driving Francis back to the tourist guest center.

So we can hear you, what's the big deal? 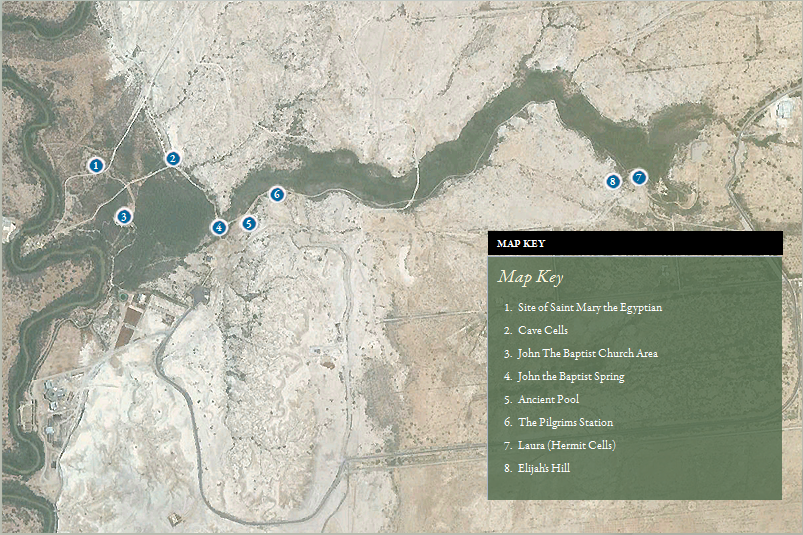 Aerial satellite map of the area in Jordan where Bethany beyond the Jordan is located.

The Church of St. John the Baptist was only 're-discovered' in 1994 along with Elijah's Hill and John the Baptist's Cave.   It was located on the River Jordan and the river washed out the churches built there many times.  In fact there have been five churches built one on top of another.  The Church of St. John the Baptist was the only church to have a cruciform baptismal pool which used river water overflow.  Problem is the Jordan River has long since changed its course.  It is now 9 kilometers inland!  In order for there to be water in the baptismal pool, a crew pumped water into it with fire hoses and watered down the hill sides with garden hoses. 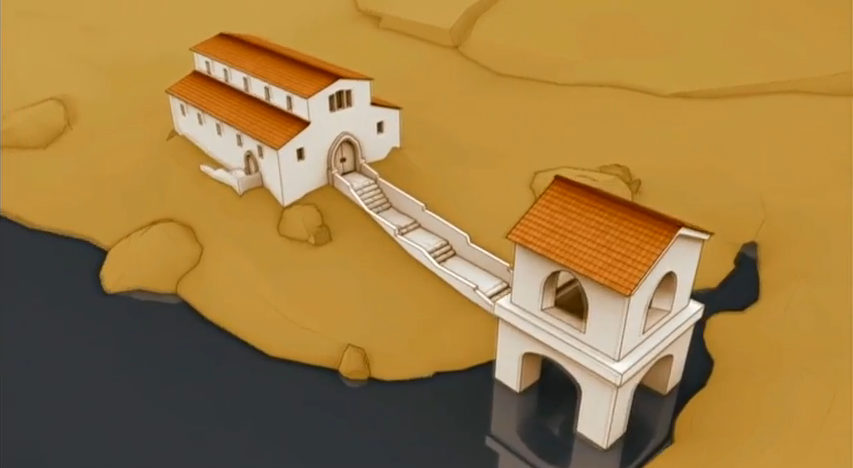 The Daily Mail wrote, "Fill her up: The Bethany beyond the Jordan before the Pope arrived as workers use hoses to fill it up." 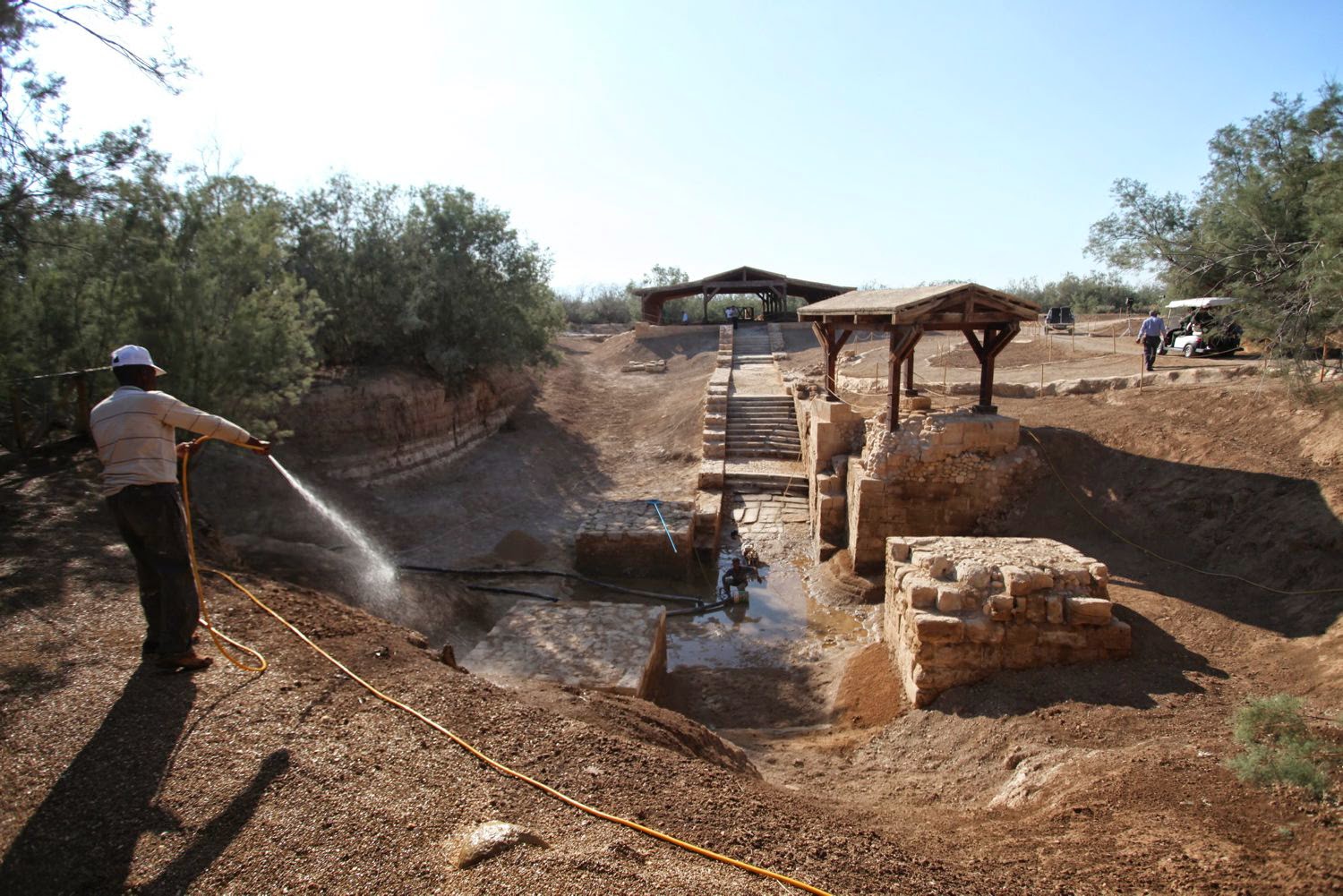 Two workers filling the Baptismal Pool up with water before Francis' visit.


Is this a sign from God?  Does it symbolize the spiritual dryness of the Novus Ordo and the emptiness of Francis on the inside?  Oh that's correct dear reader, we forgot Francis isn't empty on the inside, instead he is filled with an inner Jew.  You can't make this stuff up!

A very interesting film on the history of Bethany Beyond the Jordan named, The Baptism of Jesus Christ: Uncovering Bethany beyond the Jordan, can be watched by (clicking here).

Posted by hereisjorgebergoglio at 5:29 PM