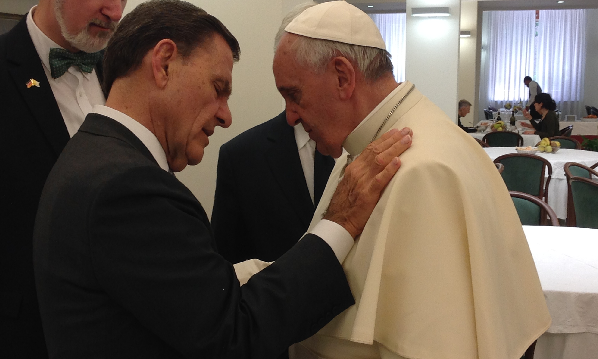 "I am so Blessed!  What Jesus asked the Father for in John 17:21, “that we may all be one in Him”, is finally coming to pass.  Pope Francis is a man filled with the love of Jesus. All eight of us in our meeting together with him were moved by the strong presence of the Holy Spirit, and our love for one another was strengthened beyond measure.  Like I said, I am so BLESSED!  What a time to be a believer!"
- Kenneth Copeland -

"We got a Pope that's the real deal!"

"Are you born again?"

"And have you received the holy ghost?"


No word on yet on what Hypocrite Francis had to say about Kenneth's ostentatious lifestyle.  Were guessing he didn't say a thing!


"Some preachers will keep silence about the truth, and others will trample it under foot and deny it. Sanctity of life will be held in derision even by those who outwardly profess it, for in those days Jesus Christ will send them not a true Pastor, but a destroyer."
— St. Francis of Assisi —
Posted by hereisjorgebergoglio at 9:56 PM