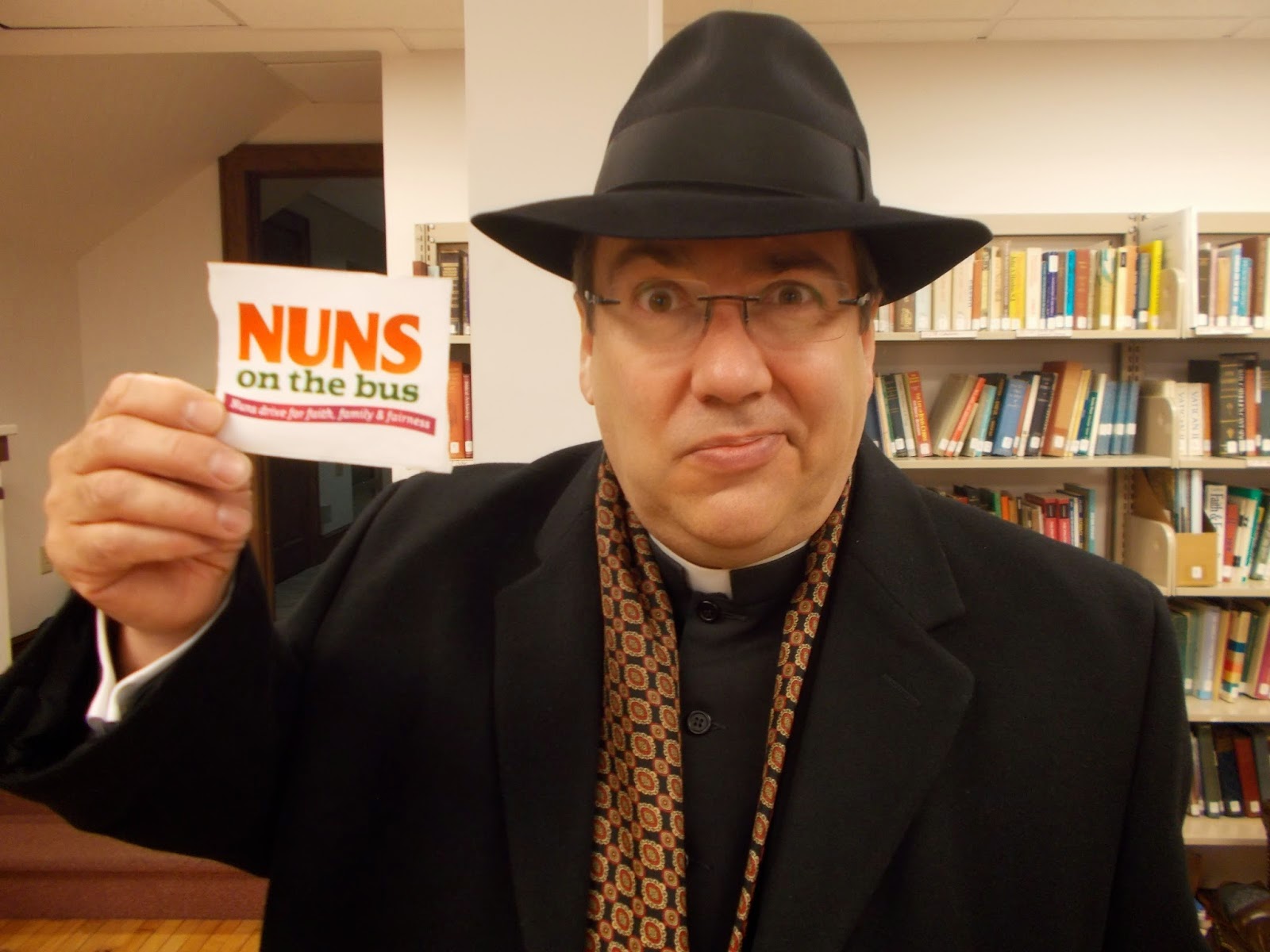 There is a blogger on the internet who styles himself 'Fr. Z'.  On his blog, Fr. Z's Blog Once named: What Does The Prayer Really Say?, he recently told readers the Pope could order a priest to break the seal of confession!  The entry was titled, Seal of Confession under threat by the State: follow-up, and an achive of it can be read by clicking here.  Thankfully, the post has been pulled down since, but to our knowledge "Don" Zuhl$dorf didn't apologize to his readers nor to the author he quoted, Aaron Taylor, nor to either St. Thomas Aquinas or St. Augustine for his error.  There was no retraction. Instead, the story was removed from the blog and sent down the memory hole.  For more on this see Novus Ordo Wire's “Fr.” Zuhlsdorf: “Pope could give a Priest Permission to ‘Break’ the Seal of Confession”.  Reading this piqued our interest and we checked out this supposed religious blog.  Before we get to our critique of a recent entry written by "Don" Zuhl$dorf, a brief background on the man.   We are using the word "Don" instead of "Father" as Zuhlsdorf is incardinated in the Suburbicarian Diocese of Velletri-Segni in Italy.  For some strange reason "Don" Zuhl$dorf lives in the Diocese of Madison, Wisconson where he claims he is researching his doctoral thesis, blogging, and writing articles for publication.  If one is interested in what "Don" Zuhl$dorf has to say about himself on this matter, one can read this entry at his blog, Waiting for Zagano. 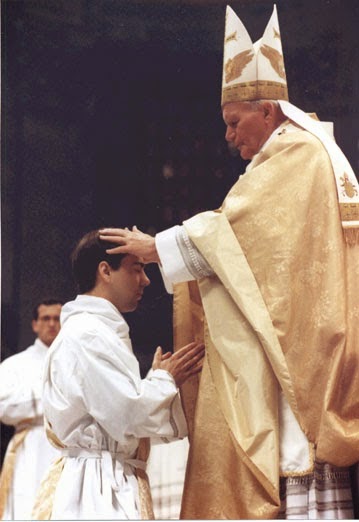 A 3rd class relic being made?

Saint John Paul II performed the laying of hands on "Don" Zuhl$dorf in the Novus Ordo's New Rite of Ordination hence the quotation marks around the word Don.  "Don" Zuhl$dorf often jokes he is a 3rd class or is it 4th class or 5th class relic because of this. (See, 2nd miracle for John Paul II takes another step forward)  If this is correct, this would also make his classmate John Corapi a relic also as he was "ordained" in the same ceremony.  The 3rd class relic, Corapi, was under suspension by his superior for illlegal drug abuse, alcohol abuse, having an affair with a prostitute, and for violating his vow of poverty.  Corapi denied all the allegations and  resigned from the Novus Ordo church 17 June 2011.

We bring this up only to show the caliber of Zuhl$dorf's classmates and "Don" Zuhl$dorf like Corapi loves to live the high life. We add the $ to his name, Zuhlsdrof, because he is constantly seeking money for himself on his blog.  We cannot claim to be avid readers of "Don" Zuhl$dorf but do come across his writings from time to time and he is always pandering for money.  It is as if his calling is to earn money for himself through blogging and his hobby is to play "priest". 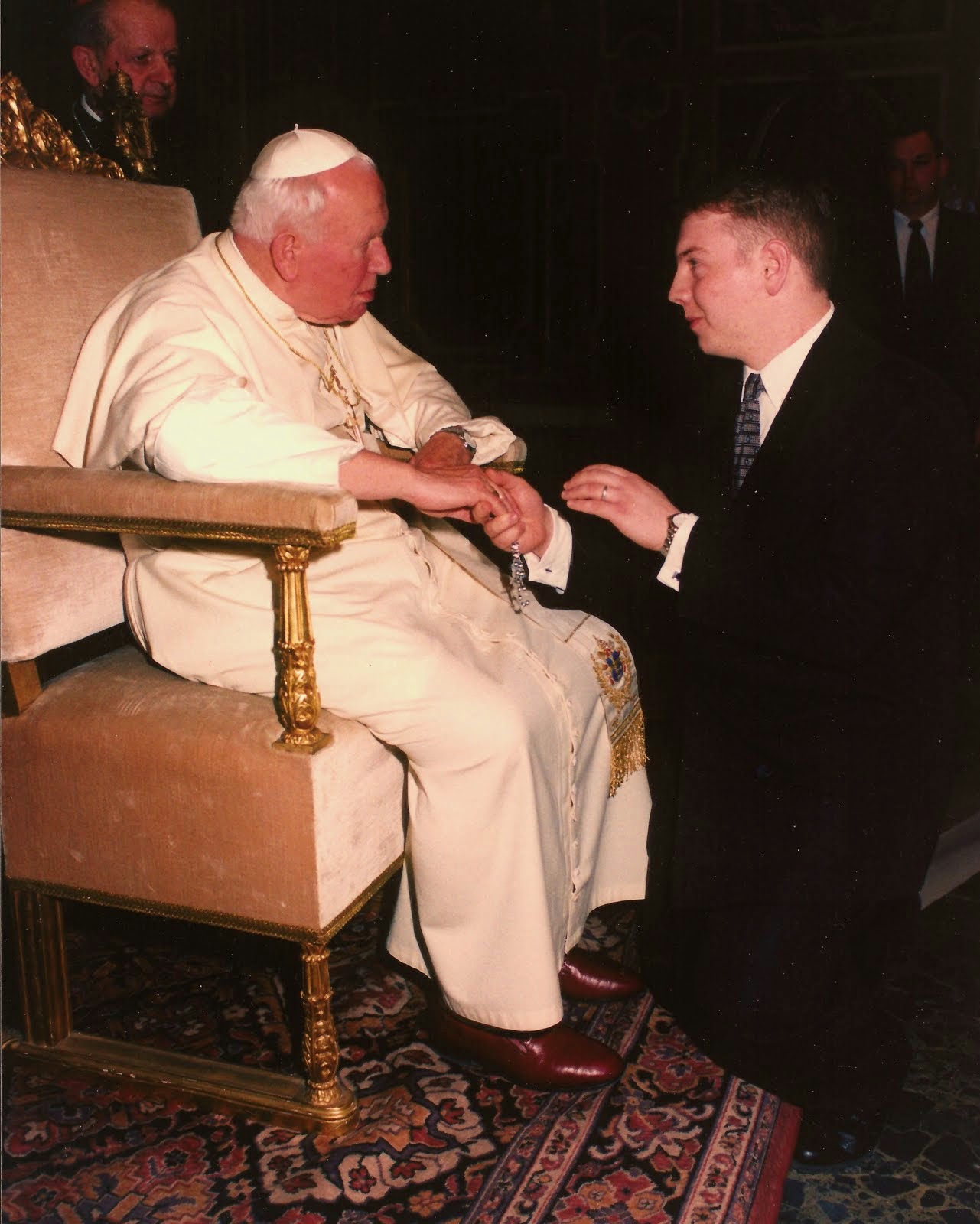 Now that we have covered the background, onto the disturbing post.  Call Me Jorge... read the entry, An Important Anniversary, which was supposedly announcing the 7th anniversary of Summorum Pontificum.  Dear reader, if you were to write a column on Summorum Pontificum how would you start it?  With a story about the Tridentine Mass or one about Benedict XVI?  Neither if you are "Don" Zuhl$dorf.  Let's look at a screenshot from his entry, An Important Anniversary. 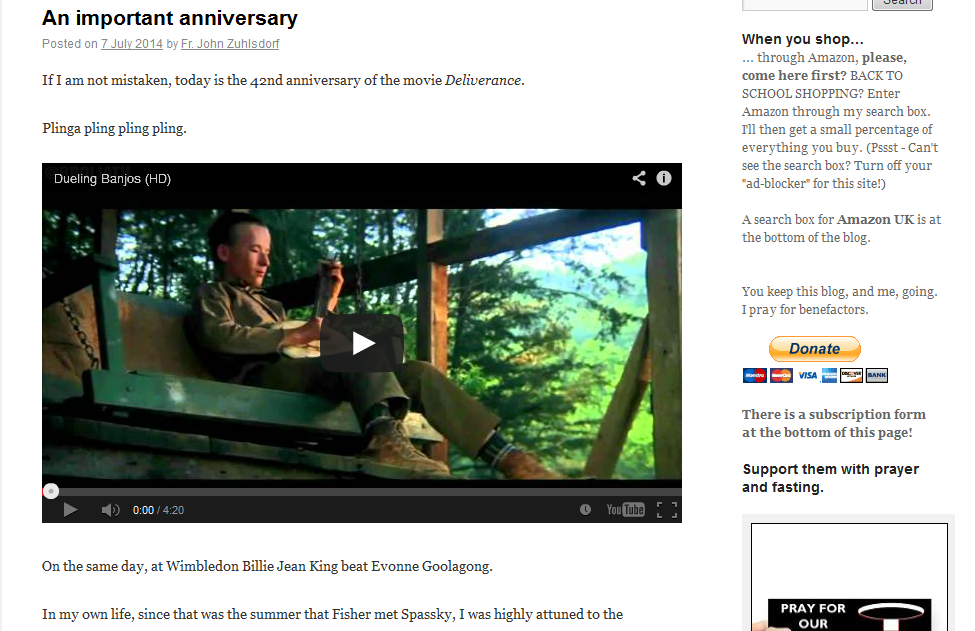 Wait a minute!  Isn't this supposed to be about Summorum Pontificum?  Instead "Don" Zuhl$dorf is writing about the immoral movie of John Boorman.  For those who don't know about this film, Deliverance, it is infamous for its scene of sodomy.  Ever heard the quote "squeal like a pig" used?  It's from the same notorious scene.   As if that isn't bad enough, several people are also murdered in the film.  Why would a 'priest' blog about a piece of music from this film?  Why introduce your readers to a film this perverse?  Are there not other films having their anniversary this day?  This isn't the first time he has written of an immoral film in his blog.  Who could forget, The Lives of Others? Thankfully this time, "Don" Zuhl$dorf didn't put an amazon link to this film for his readers to purchase in the post.  One last thing about the clip "Don" Zuhl$dorf chose to embed on his website, it uses God's name in vain not once but twice!  This can be heard at the 3 minutes 59 seconds and the 4 minutes 6 seconds marks of the clip.  This man calls himself a priest?  What were they teaching in the seminary he attended?

Next he mentions Billie Jean King winning the 1972 Wimbledon Tennis Tournament.  What is so important to "Don" Zuhl$dorf about 42 years ago?  We could let this slide if it were not for his mention of Deliverance.   Billie Jean King is a pro-sodomite and pro-lesbian activist who openly lives the sinful life of a lesbian!  Again, why on a blog about religion is a 'priest' bringing up this stuff?   Why not prayers or something on the spiritual life?  Is "Don" Zuhl$dorf bringing readers closer to God by exposing them to items which could lead them into sin?  He seems to be hung up on sex as he also recently used sexual innuendo to sell generators in another post.  See, New Low for “Fr.” Zuhl$dorf: “Use Protection!” for more. 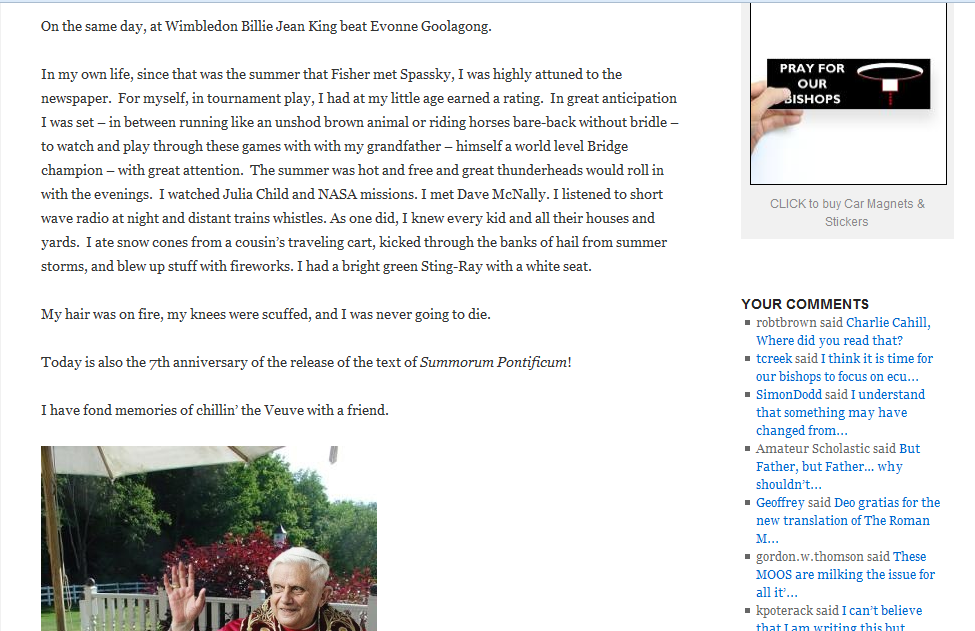 Next "Don" Zuhl$dorf talks about memories from his Lutheran childhood.  Playing chess, watching Julia Child cook, listening to NASA missions, meeting a baseball pitcher, riding bicycles, etc... filled the summer of '72 for "Don" Zuhl$dorf.  Why not choose another summer?  Were there not movies and tennis played in them?  Or better yet, could he have mentioned a great event from Church history which took place on this day or something from the life of a saint? 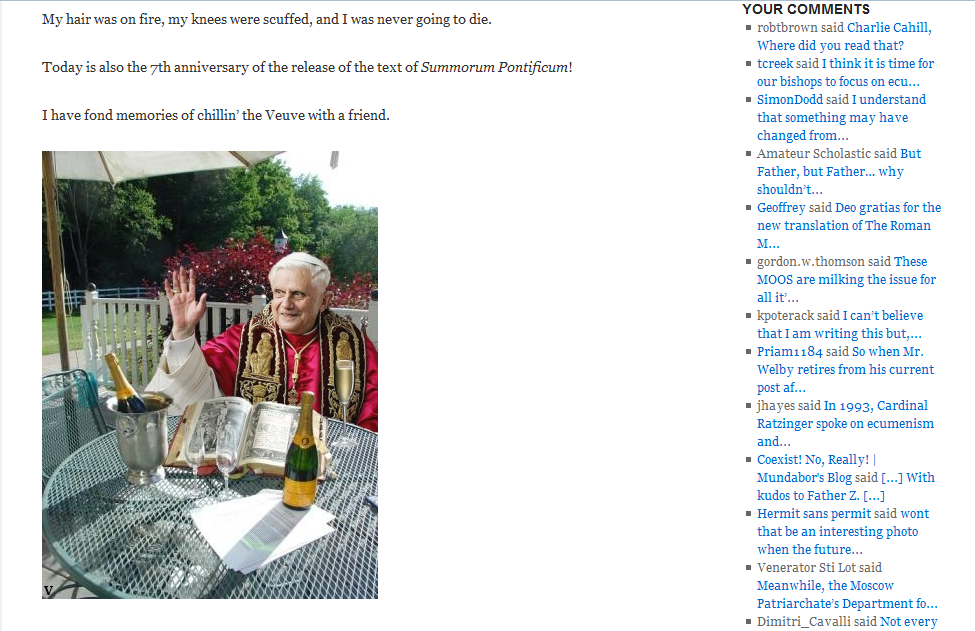 Does this convey respect?  Did he really chill Veuve Clicquot Brut NV champagene with Benedict XVI?  We don't think so but, who knows, maybe "Don" Zuhl$dorf imagined this in his mind and decided to photoshop his memory?  We ask again is this respectful of Benedict XVI?  It appears the book on the picnic table is a 1962 Altar Missal.  Was "Don" Zuhl$dorf not properly taught in the seminary what sacrilegious means? 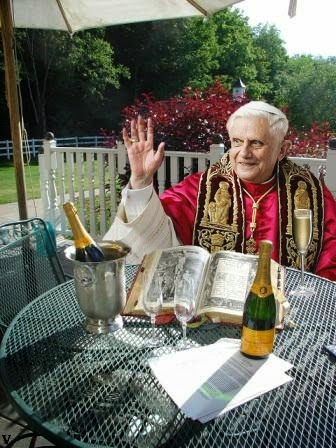 Sacrilegious behavior is acceptable in the Novus Ordo church!

We do have to applaud "Don" Zuhl$dorf for not linking to the Veuve Clicquot Brut NV.  At $55.00, (according to wine.com) he could have made a fat commission off of it.  The commision for the 1962 Altar Missal would have been even heftier as they retail in the ballpark around $285.00 (according to New Liturgical Movement).  We almost forgot, a cardboard cutout of Benedict XVI can be found on amazon for $50.00.  Either "Don" Zuhl$dorf was in a rush when he was writing the post or he couldn't find the items for sale on amazon to link to.  Who knows, could he have for once been showing restraint?

Why did "Don" Zuhl$dorf put all these things together in a post?  We at Call Me Jorge... are really stretching it here to make this all fit together.  Is "Don" Zuhl$dorf saying that Summorum Pontificum was Deliverance from the Novus Ordo Missae he was ordained under?  If so, why not come out and say it?  Why not play a clip of communist Michael King, Jr. saying, "Free at last! Free at last! Thank God Almighty, we are free at last!" ?  It makes about as much sense!

"Don" Zuhl$dorf is considered one of the star "priests" of the Novus Ordo church and is a perfect reflection of the man-made Novus Ordo Missae & the Second Vatican Council.  If you are looking for prayer or spiritual life "Don" Zuhl$dorf's blog isn't the place to go.  If you are looking to see where he is flying, what bigwigs he rubbed shoulders with at the Vatican, want to see photos of what gourmet meal he just consumed, know what books he is reading, ad nausea...  and to help him live this lifestyle by purchasing items he recommends such as coffee, generators, immoral movies, etc... on his blog - then it is the place for you.  One Catholic commentator wrote, "He shouldn't call himself Father Z. but Fr. Me!" 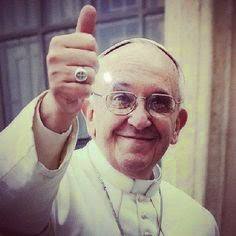 Zuhl$dorf like Francis is all about glorifying himself!
Posted by hereisjorgebergoglio at 4:21 AM