Even the Vatican itself doesn't know what Francis said!

Nor does Michael Voris! 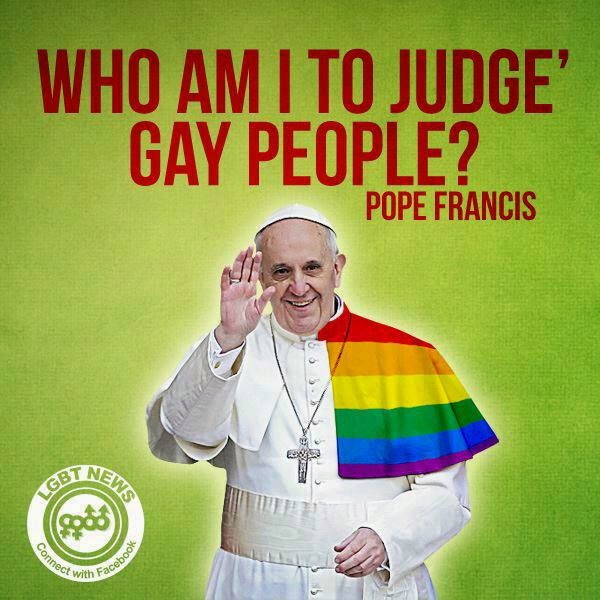 According to Michael Voris and ChurchMilitant.TV the nonsense about Francis has to STOP!  And NOW!  In one of their latest Vortex videos, Voris laughably says Francis is ill quoted and misrepresented!  Do any readers of Call Me Jorge... think we do this?  Voris insists one should ignore the media and blogs until the Vatican and/or Voris can clarify what Francis really meant to say.  In other words don't believe the conclusions you have reached (with your ears, eyes, Catholic morals, and your brain) but wait for the gatekeepers to explain away all that heretical behavior of Francis.  The first misleading point Voris makes in his video is what the term civil union in Italy means.  The definition of civil union in Italy is when two people of the opposite sex get married in front of a government official with two witnesses.  We will say more on this in a moment.  Next, Voris makes his listeners think Italy is different from the United States if one is a Catholic when it comes to marriage but this simply isn't true.  See he leads the listener to believe if you are Catholic one needs to have a civil marriage before one has a marriage in the church.  This is only the case for non-Catholics.  From the United States Diplomatic Mission to Italy,


Religious Ceremony: A religious ceremony is considered valid if performed by a Roman Catholic priest.  A separate civil ceremony will not be necessary, as the priest will register the marriage with the civil authorities.

...A religious ceremony performed by non-Roman Catholic clergy requires that a civil ceremony be performed prior to the religious one to ensure the legality of the marriage.  If you are planning such a religious ceremony, you should consult with the priest, minister, or rabbi far in advance of the actual ceremony.


See how Voris plays fast and loose with the facts?  He is as guilty of the same thing he is accusing others of!  Not to mention back in Argentina, Cardinal Bergoglio was against same-sex marriage under the auspices of the church but for same-sex civil union contracts by the Argentinian government!   Pro-sodomy activist, Marcelo Marquez wrote a letter to the Argentinean church leaders upset about them not supporting same-sex marriage.  Less than one hour later his phone rang and on the other end was Cardinal Bergoglio.

"He told me. ... 'I'm in favor of gay rights and in any case, I also favor civil unions for homosexuals, but I believe that Argentina is not yet ready for a gay marriage law.'"


Voris then informs everyone how ill informed they are about same-sex civil unions as if in Europe the countries which have them are rare.

Voris ignores these facts on same-sex civil unions in Italy:

Voris also turns a blind eye to the past behavior of Francis.  According to Leonardo Boff in a Der Spiegel interview,

For example, a few months ago he explicitly permitted a homosexual couple to adopt a child. He kept in touch with priests who were expelled from the official church because they had gotten married. And no one could ever persuade him to change his position, which was: we have to be on the side of the poor, even if it means opposing the powerful.


Did you catch that?  He permitted a child to be adopted by sodomites when he was Archbishop of Argentina!  This is clearly against Catholic teaching.  Has Francis changed since moving to the Vatican?  Nope!  Did you hear a peep from the Vatican when on 5 April 2014 two lesbians had their daughter baptized at Cordoba Cathedral?  Sources in the church said,

"if Jorge Bergoglio were not Pope, it would have been more complicated."


Once again this is against Catholic teaching.  Children are to be raised in a Catholic home and bishops as well as priests are instructed to forcibly remove the child from the home if this isn't the case.  Sodomy, lesbianism, whatever you want to call it, it isn't Catholic.  Don't believe us, then look it up  in a commentary on Canon Law.  We haven't even mentioned, this same couple was married in an Argentinian civil union because of a law Francis supported!

Back to Voris and his Vortex of distortion.  Here is the quote from the interview of Francis by Ferruccio de Bortoli which Voris refers to but doesn't provide the viewer with.

Many countries have regulated civil unions. Is it a path that the Church can understand? But up to what point?

Francis: Marriage is between one man and one woman. The secular States want to justify civil unions to regulate different situations of coexistence, spurred by the need to regulate economic aspects between persons as, for instance, to ensure healthcare. Each case must be looked at and evaluated in its diversity.


It is clear from the above quote Francis differentiates between marriages and civil unions however he doesn't differentiate between civil unions between heterosexuals and same-sex civil unions.   Francis doesn't come out and condemn this sinful behavior of same-sex civil unions instead he leaves the door open.   Before one believes the official what he really said look at the words above "different situations of coexistence" and "diversity".  Notice Voris in the video makes you think the question is about Italy when the interviewer said, "many countries."  Voris on the other hand says everyone got what Francis said wrong and sets up a straw man which he can attack to make himself look good.  Does Voris' behavior remind you of anyone?  Francis perhaps?

It's not in this video but in others Voris has said the reason for this quote getting explosive play in the media is also due to it being mistranslated!  He tells listeners the Vatican translations are atrocious and at fault for making Francis seem un-catholic.  Who buys this hooey?  We compared the translation above to the original Italian and while it is not a literal translation it does say the same thing.

What is growing old is the same old monotonous excuses Voris comes up for Francis' behavior as well as his ostrich-like response, where he sticks his head into the ground, when he doesn't want to address Francis' behavior because he cannot defend it.  If you don't like the "3rd rate chatter" of this blog and believe Francis is misunderstood and want to hear excuses for Francis instead, sign up for Voris' Retreat at Sea and tell him Call Me Jorge... sent you!

And now onto Michael Voris and the Vortex...

Even the Vatican Itself Doesn't Know what Francis Said!


Remember to chill out and wait for the official word from the Vatican unless you are Voris mis-reporting that Francis is about to take a broom to the Curia and sack them all!
Posted by hereisjorgebergoglio at 11:25 PM