"Some preachers will keep silence about the truth, and others will trample it under foot and deny it. Sanctity of life will be held in derision even by those who outwardly profess it, for in those days Jesus Christ will send them not a true Pastor, but a destroyer."
— St. Francis of Assisi — 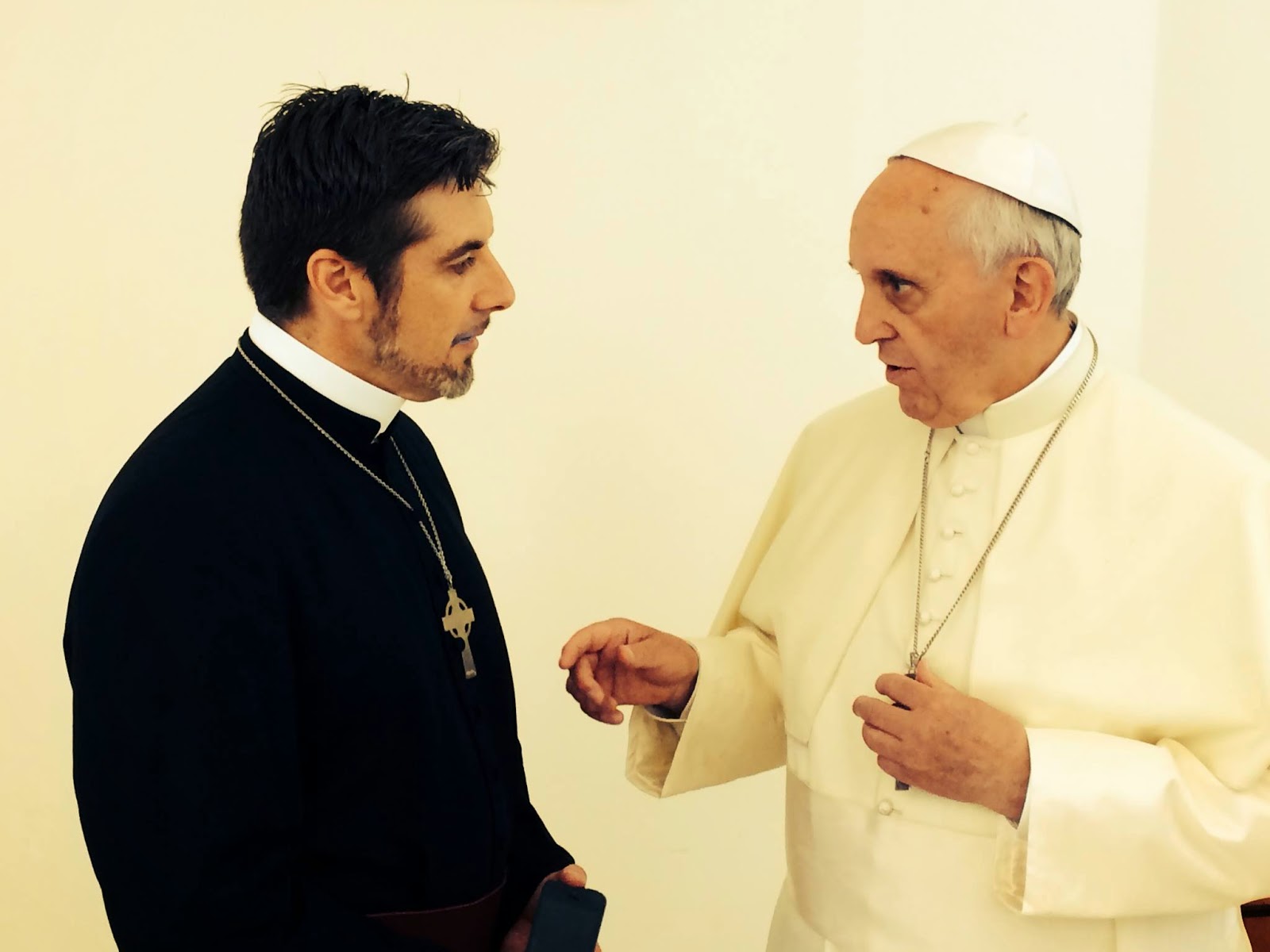 'Bishop' Tony Palmer and Francis talk in the Vatican.

Earlier this year Francis called his old friend 'Bishop' Tony Palmer and invited him to visit him at the Vatican.  While there Tony asked Francis if he would send a message to a group of evangelicals he was soon to meet.  Francis suggested a video and they proceeded to make a cell phone video.  Tony had subtitles added to this video and presented it at a conference held by Kenneth Copeland.  If you haven't seen the videos, they are worth one's time as they demonstrate what Francis means by catholic and how evangelicals perceive Francis and his Novus Ordo church.  If one doesn't have the time to watch the videos, at the least watch the 3rd video below, Francis' cell phone video message about unity.

Tony's message about the miracle of unity

Video message Francis made with Tony Palmer
on unity with Pentecostals


Synopsis : Francis undermines one Catholic teaching after another in this video.  If you don't agree with Francis perhaps you are not speaking the language of the heart.  Remember according to Francis it is a sin, all of our sins that cause us to be separate from each other.  We need to get together and spiritually hug each other.  In our diversity there is unity.  Echos of a one world religion united under an anti-christ.


In the last video we hear Francis call Tony his brother bishop.  Is Tony a bishop?  Not according to Catholic teaching.  Tony was 'consecrated' a 'bishop' by 'Archbishop' Robert L. Wise and his 'co-consecrator' 'Rev.' Gerard O'Flaherty.  Check out the pictures below.

What does the Catholic Church have to say about Anglican orders?  Pope Leo XIII promulgated the papal encyclical Apostolicae Curae (On the Nullity of Anglican Orders) on 18 September 1896.  This encyclical put to bed any question of the validity of Anglican orders.  Pope Leo XIII wrote there was a deficiency of intention and of form in the Anglican rites and they were "absolutely null and utterly void."  Is 'brother bishop' Francis letting it out that he too isn't a bishop?   For those who haven't looked into the Novus Ordo rites, they too have the same problem the Anglican ones do. 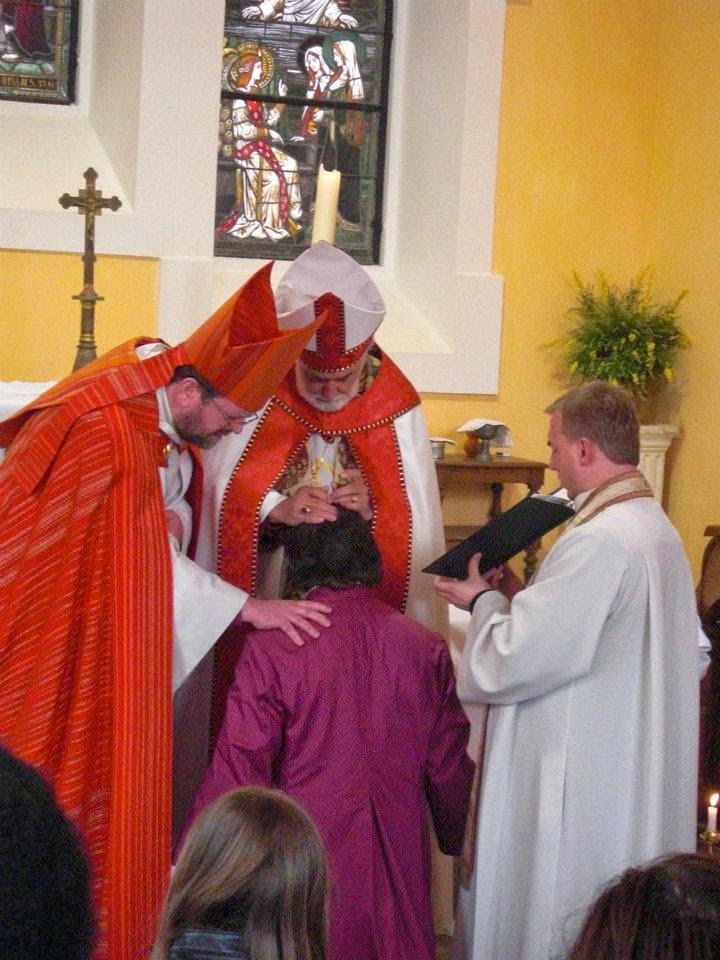 Congratulations Tony! You are still a layman! 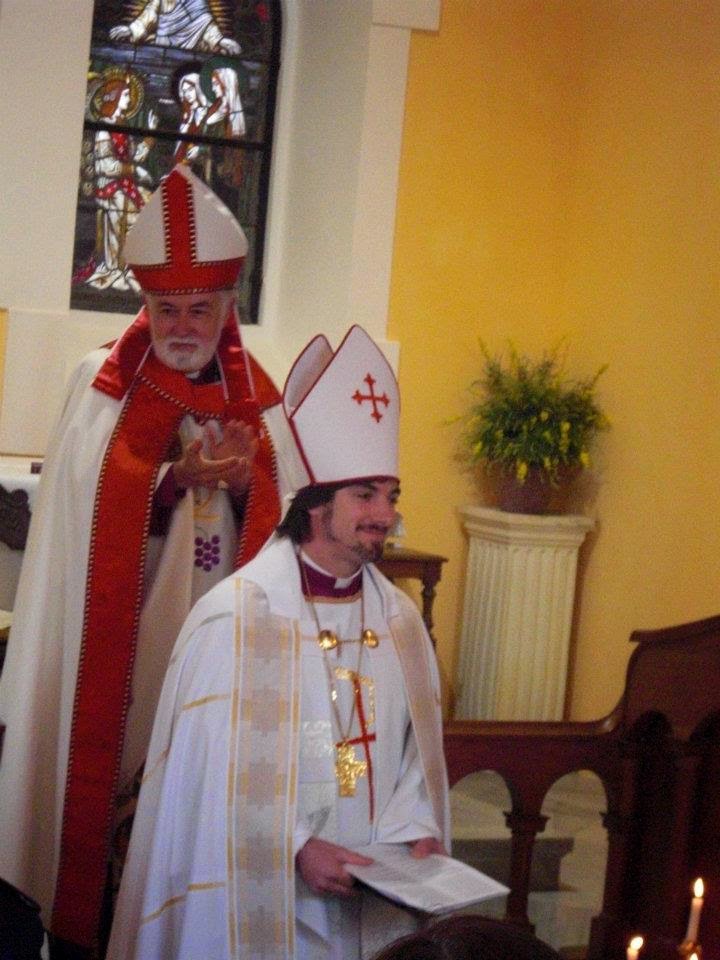 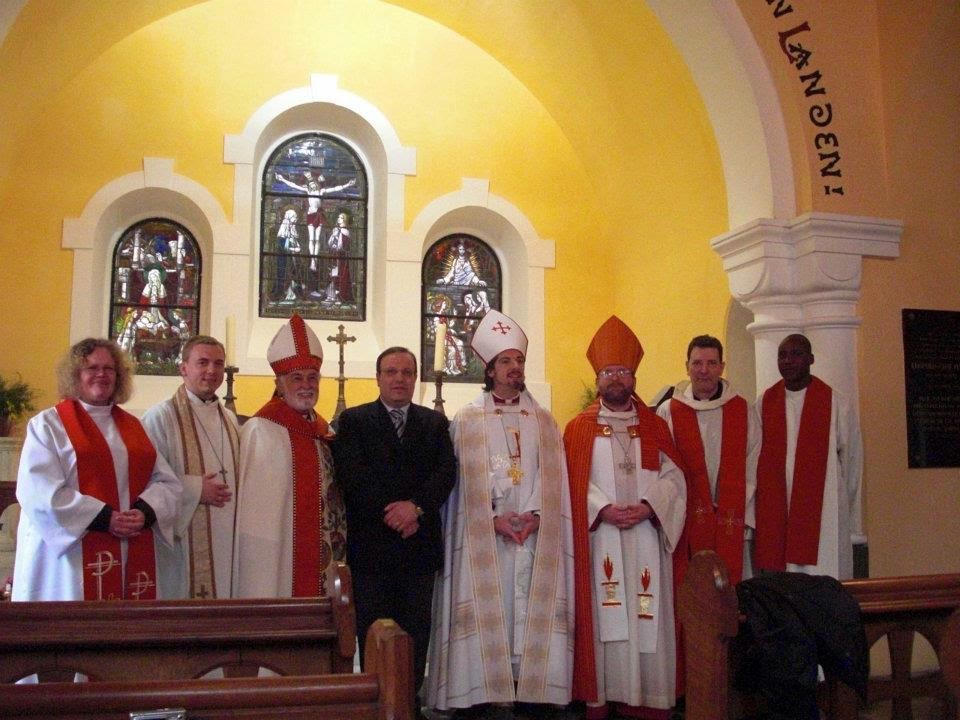 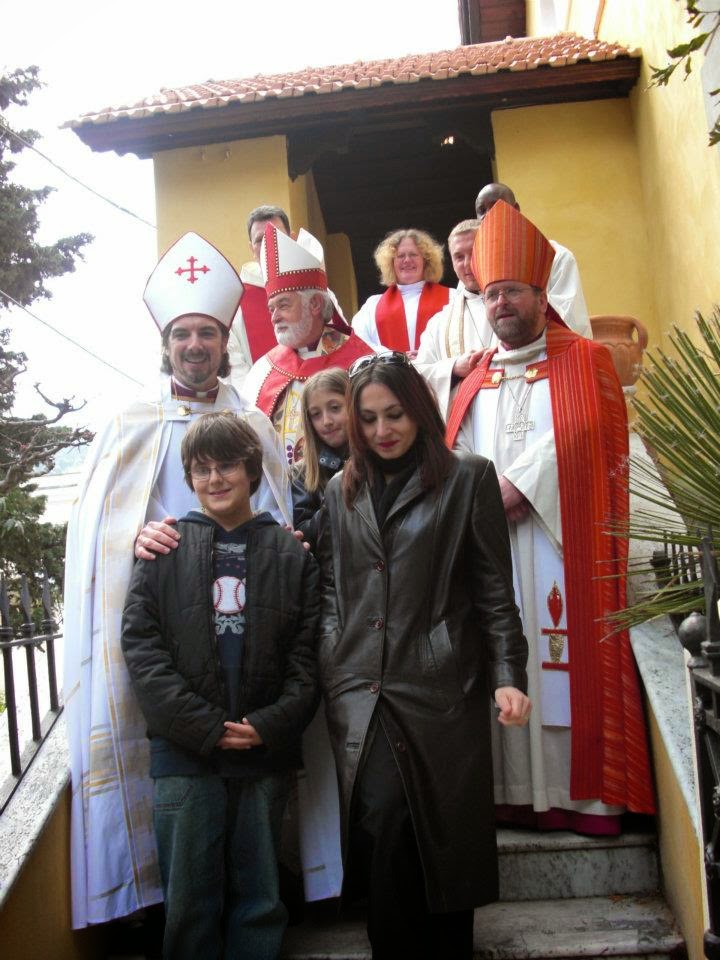 Yep, that woman in black is Tony's wife and those two children are his. 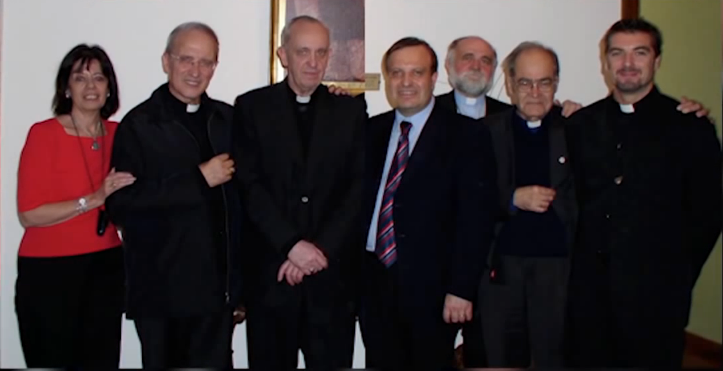 Jorge Mario Bergoglio and group of Evangelicals.
Tony is on the right.  (Argentina 2008)

According to our research Tony and Franics' friendship goes back to 2008.  It  began when Tony recognized Jorge Bergoglio as the highest man in the land when he was working with the poor of Buenos Aires.  Tony said,


“I want to let you know that I will work at your side. You are the senior minister in this area and I will submit to your loving leadership.”


From that day on, Tony called him Father Mario and as the story goes they have been best buddies ever since.  Tony considers Francis his mentor and spiritual father!  It is telling, since Francis' election Tony sees more of him than he ever has. 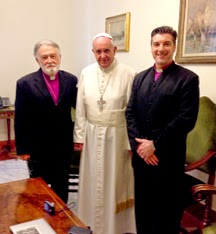 'Bishop' Wise, Francis, and 'Bishop' Palmer at the Vatican 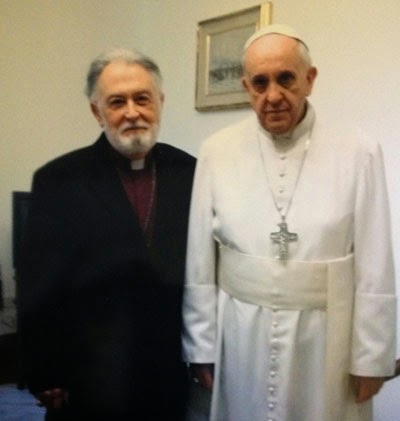 
Don't think Francis is a stranger to having evangelicals over to the Vatican as guests.  Or this is something new for him.  Back in Buenos Aires, Francis regularly attended encounters with evangelicals.  Most infamous is the, 19 June 2006, Third Fraternal Encounter of the Renewed Communion of Evangelicals and Catholics held in Luna Park stadium in Buenos Aires, Argentina where Jorge Bergoglio received a mass blessing from the protestants in attendance. Who can also forget Jorge Bergoglio resting his head on 16 year old, Juan Francisco Taborda's shoulder as the seventh day adventist whispered into his ear? 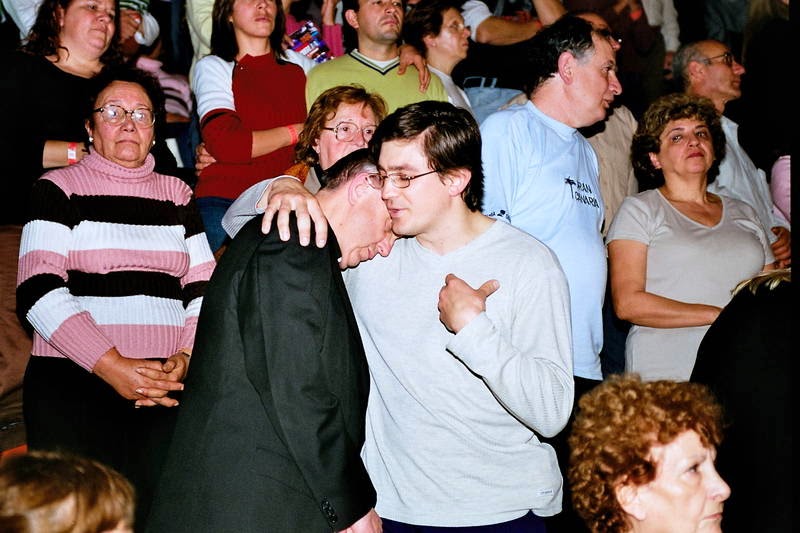 Now that the background is out of the way what happened recently?  Tony Palmer brought a group of evangelicals to the Vatican at the request of Francis.  They toured St. Peter's Basilica for one hour and then ate lunch with Francis.  Lunch lasted almost three hours.  The result of this meeting was Francis telling the evangelicals to keep doing the good work they have been doing and,


“I’m not interested in converting Evangelicals to Catholicism. I want people to find Jesus in their own community. There are so many doctrines we will never agree on. Let’s not spend our time on those. Rather, let’s be about showing the love of Jesus.”

Recall when Francis told the Italian atheist, Proselytism is solemn nonsense.  Here he is saying in a different manner.  We can hear Francis' apologists already attempting to come up with excuses for this statement.  Who knows what leaps of logic they'll try to make you swallow.  Francis however says even more,


“this July I will preach in his church on a Sunday and offer an apology from my church for the hurt it has brought to their congregation.”

Sound very Catholic to you?  Nope, modernism at work.  If we speculate, it all seems to be leading to a one-world religion and a one-world government under an anti-christ. 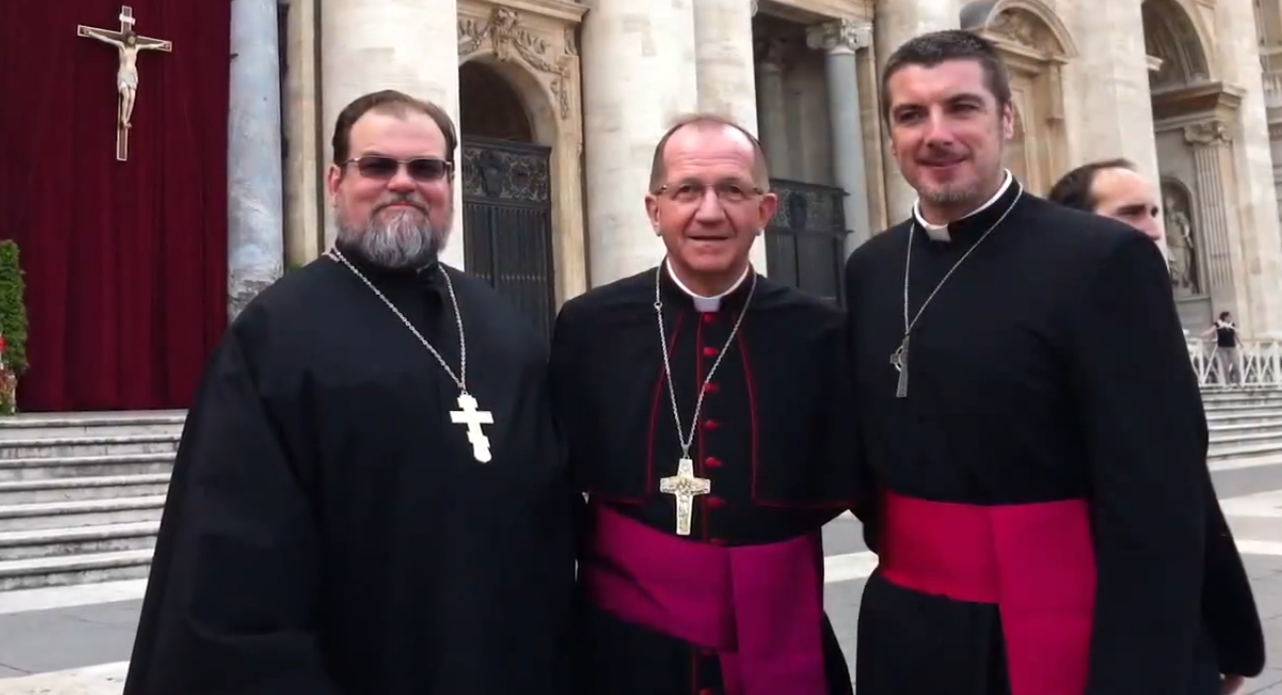 Tony Palmer spreading the word at the Vatican! 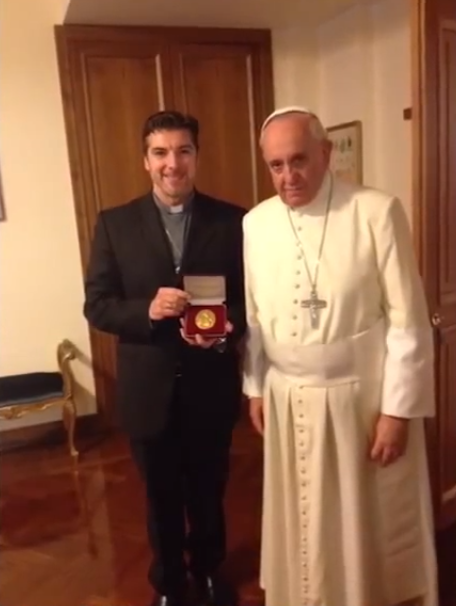 Tony, guest of Francis once again!

Tony & Francis give each other a spiritual hug.


To learn more about Tony Palmer:

Posted by hereisjorgebergoglio at 9:14 PM